How many drinks have you tried? Do you like to drink a weird drink often? People love to drink things. There’s nothing better on a hot day than an icy cold glass of water. Or a nice, citrus-filled drink to kick off the weekend.

But then there are other drinks. Some drinks you drink just because they are so healthy, maybe Matcha tea or Kombucha. Some are healthy and yummy, like red wine. And still there are others you drink because you just have to: coffee.

But what’s the weirdest thing you’ve ever had to drink? Did you ever get the “booger” from the Kombucha? Maybe you tried a cheeseburger shot? Let’s see what other weird drinks we can try. 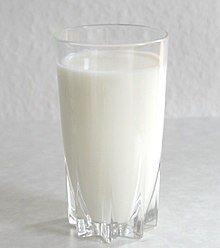 This drink combines milk and beer. As a fan of neither, this sounds less than appetizing to me. Bilk came from a son of a liquor store owner who was also in the dairy farm industry. They couldn’t get rid of milk they were producing, so he called a local brewery and pitched the idea to brew the two products together. With one-third of the drink being milk and the rest, beer, it’s a great way to help the local farmers. People who have enjoyed the brew say it tastes like fruit, and therefore is good with sweets. Because of its flavor, the thought is that the drink will be popular among women. 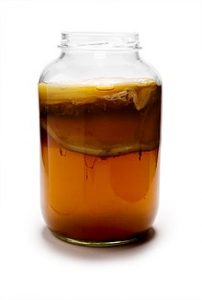 Have you ever got the booger? If you have, this is not your favorite drink. The booger is just weird and yucky. But the rest of Kambucha? Well, you will have to decide for yourself. Kambucha is a fermented, lightly “carbonated” sweetened version of green or black tea. This drink is known for its health benefits including helping asthma, diabetes, herpes, insomnia and more. 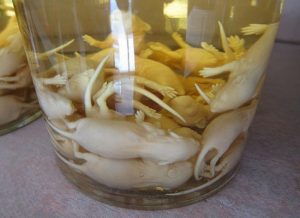 The story behind this drink is as terrifying as it seems. To make Baby Mice Wine, you take baby mice shortly after they’re born and drop them, alive, into a jug of rice wine. You then leave them to ferment (and drown.) If you can get past these facts, then here’s the rest. The health benefits are outstanding as it’s said to be very effective against asthma. Baby Mice Wine is also touted for helping hepatic or liver disease. So, at the end of the day, this Chinese/Korean concoction is healthful, but, could you ever drink it

Stick it to the North Korean dictator with this drink made of American delicacies, or more so, McDonalds. That’s right, to make this drink, you will need to make a trip to McDonalds first. Order 1 Big Mac, 1 McDonald’s large fries, 1 McDonald’s Milk Shake (all three flavors in one,) 1 McDonald’s apple pie and of course a packet of BBQ sauce. Upon returning home, add all of that to a blender, with vodka, and you’ve got it. A Kim Jong un Nuclear Bomb. Drink up. 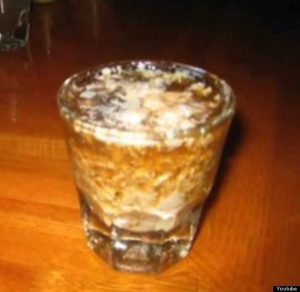 So this name is gross, but the drink itself? Maybe not so bad. Though we can all agree that it looks like curdling milk in a drink.  In fact, if you are a Bloody Mary lover, and a dairy lover, this may be your new favorite drink. To make an Infected Whitehead Shot just mix some vodka, some Bloody Mary mix and  spoonful of cottage cheese, that’s the drink! To you this drink sounds truly putrid but to someone else, it may be perfection.

So, are you ready and excited to try some of these new drinks? You’re probably happy with your water and occasional (milk-free) beer. But just in case you have tried any of these, share in the comments and let us know what you think of them!