Having been elected in 1834 as a state legislator in the Illinois Ninth General Assembly, Abraham Lincoln traveled from New Salem to Vandalia, then the state capital, to take his seat in the legislature as a representative from Sangamon County, the county in which Lincoln’s hometown of New Salem was located. A state legislator represented his county, not just his hometown within a particular county. (There were no female legislators during the four terms that Lincoln served in the Illinois legislature.) Concerned about his lack of suitable clothing for the political duties he was about to undertake, Lincoln borrowed money from a friend to purchase a suit – the first suit Lincoln had ever owned — and other clothing he would need for his work in the General Assembly. Lincoln roomed with the Whig Party leader, John Todd Stuart, in an inn on the town square in Vandalia.

The state legislature met biennially (i.e., every two years) for 65 to 70 day sessions. The legislature was comprised of 26 senators and 55 representatives. The Illinois Supreme Court also met in the same building during the time the legislature was in session. The first meeting of the Ninth General Assembly took place on December 1, 1834. Lincoln, then 25 years old, was the youngest of the 55 representatives. He had won the local election in Sangamon County as a member of the Whig Party, a national political party led most prominently by Henry Clay, a United States congressman and senator from Kentucky. 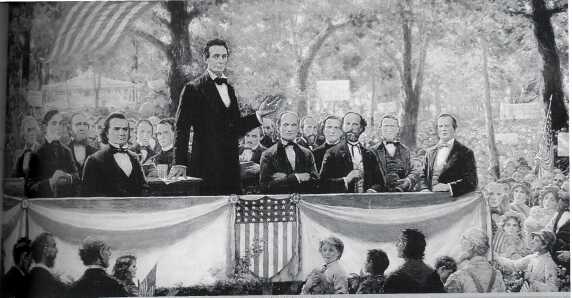 The Whig Party was named after a British anti-monarchist party. The Whigs favored the supremacy of the U.S. Congress over an authoritarian presidency, and the Whigs in general supported economic programs that protected banking and economic interests. The primary party in opposition to the American Whigs was the Democratic Party, led by Andrew Jackson, the seventh president of the United States. The Democrats derided the Whigs as being a party focused on the interests of the wealthy and the aristocrats, and the Whigs in turn labeled Jackson “King Andrew” for his support for a strong central government. Though the Whigs had some successes in national politics, the party eventually fell apart because of internal divisions over the issue of slavery. Whigs in the northern states were generally anti-slavery, and they (including Abraham Lincoln) eventually gravitated to the newly-formed Republican Party. Whigs in the southern states either became Democrats or they joined a number of smaller parties that further diluted the political influence that the Whigs had once had on national politics.

When Lincoln rose to speak in the Illinois state legislature for the first time, on December 5, 1834, none of the political and social storms that would consume the country two decades hence had assumed prominence in the national consciousness. Lincoln, speaking in a high voice with a Kentucky accent, introduced his first proposed legislation: “An Act to Limit the Jurisdiction of Justices of the Peace.” Lincoln’s bill quickly ran into trouble, however. It was forwarded to a committee, and that action was followed by assignment to a second committee. Lincoln watched as his bill became entrapped in the mysterious minutiae of the legislative process, and it never saw the light of day again. Lincoln likely realized that he had a lot to learn and master about the legislative process.

Lincoln dutifully appeared in the legislature each day, voicing his presence during the roll call, but he also took the opportunity during slow legislative sessions to observe the legal proceedings in the Illinois Supreme Court, which was also located in the building where the legislature met. He had noted that many of the state legislators were lawyers, and he found himself being drawn to the law as a profession. His evenings were often spent in the inns in Vandalia where many Illinois politicians roomed during the legislative session. There was ample political talk and discussion, but he also listened to lawyers who were in town to argue their cases before the Illinois Supreme Court. Lincoln also began to write articles about the legislative session for some Illinois newspapers. The letters were forwarded anonymously, but they were substantive in content and were often humorous.

Lincoln’s good sense and effective use of humor brought him to the attention of many of the legislators, and he developed working relationships across party lines. The Speaker of the General Assembly, James Semple, was a Democrat, but he noticed in Lincoln a willingness to look for cooperation and compromise across party lines. He also appreciated Lincoln’s use of humor to break down partisan barriers, and he appointed Lincoln to 10 special committees and called regularly upon Lincoln to speak to important matters before the legislative body.

The first legislative session of the Ninth General Assembly ended on February 13, 1835, one day after Lincoln’s 26th birthday. Though he mostly listened as he learned the details of the legislative process, he had formed political and personal relationships within the Whig Party and with a number of legislators from opposing parties. After receiving the second part of his legislator’s salary ($158), Lincoln took the stagecoach back to Springfield, eventually making his way back to New Salem where he continued his work as the postmaster and as a surveyor.

In his 1836 run for the state legislature as a representative, Lincoln received the highest number of votes among all of the Sangamon County candidates, and he served as the floor leader for the Whig representatives. Lincoln tried to better organize the party members throughout all of central Illinois, and he became recognized as an effective Whig leader as a result. He proposed laws for fostering internal development in central Illinois (e.g., improved roads and more railroad lines), but the economy was faltering, and he got little support for such projects from his Whig colleagues.

One major topic of concern in the legislature during Lincoln’s second term was whether the state capital should be relocated from Vandalia to another locale in the state. Several locations were suggested and debated, including the city of Springfield, which was also located in Sangamon County. Lincoln and several other Whig leaders aligned with him argued that Springfield was the most central location in Illinois and that the growing city would make the best capital. Lincoln used all of his legislative skills in promoting Springfield, including the passage of a law that would require the city chosen for the capital to contribute $50,000 and two acres of land for the site of the new state buildings. Lincoln and his supporters knew that none of the other cities under consideration could meet these requirements. The legislative debating and voting were contentious, but on the fourth round of voting Springfield was selected as the new capital, and it remains the state capital to this day.

The issue of slavery also arose during Lincoln’s second term in the state legislature. Abolitionism, i.e., the social and political movement for the end of the slave trade and the institution of slavery in the United States, was debated in the Illinois legislature. Though a resolution was passed deploring slavery, the Illinois legislature decided that it had no power to address the issue of slavery as it already existed in slave-holding states. The resolution was adopted by a 77 to 6 vote. Lincoln disagreed that the legislature lacked power to address the slavery issue, and he was one of the 6 legislators who voted no. This was his first public declaration on the slavery issue. Lincoln’s second term in the legislature was also notable because Democrat Stephen A. Douglas was also serving as a state representative. Barely five feet tall, Douglas’ deep voice and composure nevertheless commanded attention from the other legislators. Though they served together as Illinois legislators, it would not be until 1858 when Lincoln and Douglas would square off against one another, as candidates for the United States Senate, in seven famous debates in which the main issue was slavery.

Lincoln returned to New Salem when the state legislative session ended in March of 1837. The town was dying. The Sangamon River proved to be unnavigable for most commercial boats, and the dirt roads in and out of town were not adequate for sustainable trade. In addition, though the residents of New Salem had hoped that the town would be commercially linked with other towns via the railroad, New Salem was not selected for inclusion in a railroad route. The town had also lost its post office, and Lincoln, therefore, lost his job as postmaster. Lincoln was ready to move on, and he had the new capital of Springfield in his sights as the place to settle down.

Lincoln was elected to two more terms – in 1838 and 1840 — in the Illinois House of Representatives as a Whig legislator from Sangamon County. In seeking his third term, Lincoln received more votes than any other candidate for the state House of Representatives. Though Lincoln was then residing in Springfield, the new capital was also located in Sangamon County, and legislators were elected to represent counties not individual towns. Lincoln had become a well-known Whig leader who was respected by his legislative colleagues. Some legislators were still upset about the choice of Springfield as the new capital, however, and they made several efforts to repeal the selection of Springfield. Lincoln was chosen by the Sangamon County delegation of representatives to respond to the pro-Vandalia representatives, and he spent a good deal of time working to thwart efforts to undo the selection of Springfield. For example, Lincoln proposed legislation to incorporate Springfield as a town, on the belief that incorporation would make it easier for the town to obtain state funding for the completion of the construction of the new statehouse.

Lincoln also made sustained efforts in his third and fourth legislative sessions to promote internal improvements – e.g., road construction, railroad expansion, and navigable canals construction — that he thought would benefit the state’s economy. His efforts were mixed, however. The Illinois economy had weakened during his time as an elected official, and money was scarce for public works projects. In addition, Lincoln had become a lawyer during the years since he was first elected to the state legislature, and by the time his fourth term as a representative had ended, he was practicing law with another lawyer in Springfield. Lincoln’s professional life as an attorney is the subject of the next essay about the man who would become our 16th president.

Highly Recommended: The Illinois State Library and the Illinois State Archive have many electronic copies of documents handwritten by Abraham Lincoln during his time in the state legislature and while he was president. For example, there are drafts of legislative bills and other documents Lincoln prepared as a state representative. Here’s the documents and to get a sense of Lincoln’s thought process as he edited his work product.