Voles and moles can cause all sorts of problems for homeowners. If these little pests are burrowing in underground tunnels beneath the surface of your garden, you could be in big trouble. It is common for people to get confused between both rodents, but there are some obvious differences that can help you distinguish one from the other. 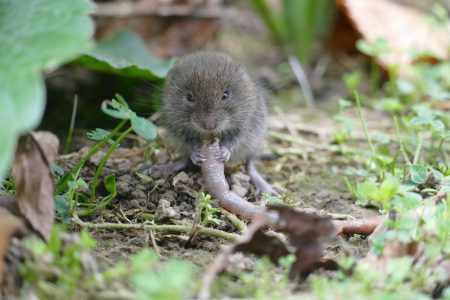 Recognizing the difference between these pests is important when you want to prevent them from entering your yard. Fully grown moles are much smaller than voles, and they are mostly herbivores. If you are growing vegetables and you notice something has been chewing on them, you probably have a vole problem. Moles are carnivorous, who enjoy eating different types of insects.

How Do You Identify Mole Damage?

There are lots of other animals that come into your yard that can cause similar damage, so identifying which pest is the culprit can cause a lot of confusion. Gophers, rats, and ground squirrels are just a few animals that garden owners don’t want to see hanging around their property.

However, if you notice patches of dead grass in areas around your yard, you likely have a mole problem, however, other animals can cause this to happen too. Mole’s often create mounds in a garden which is a common sign of a mole infestation. However, gophers can leave a similar trail behind them too. But gophers tend to leave smooth dirt behind them while moles often leave big pieces of dirt. If the mounds are approximately seven feet or more apart from each other, this is an indication that there are moles destroying your yard. Mounds that are close together are often created by gophers.

After you remove the mounds of dirt, can you see the entrance to the tunnel the animal has made? Most of the time, when people have a mole infestation they can see the tunnel that the mole has created. Gophers tunnels are often much bigger, so you can notice them without having to remove the mound.

How Do You Identify Vole Damage?

If you think you might have voles damaging your precious yard, here are a few things you should keep an eye out for:

Gnaw marks: Voles often leave gnaw marks on the lower parts of trees and other plants. If you notice small gnaw marks, approximately ?-inch long and around ?-inch wide, you probably have a vole infestation.

Delayed Fruit Production: If you are wondering why your fruit trees are taking longer to produce fruit, or if they have halted production, this is another key sign that you have a vole problem. Voles are known to chew on roots, which can have a disastrous impact on fruit production.

What do burrows caused by voles look like? Unlike moles, voles tend to leave clean entrances behind them. These holes are a little over one inch in diameter. These entrances are often in line with the surface runway.

Now that we have described what damage these pests do, let’s get into how we can prevent these little pests from gaining access into your yard in the first place!

5 Ways to Stop Moles From Damaging Your Yard

Luckily, there are plenty of things you can do to prevent these little creatures from destroying your property. Here are five ways people have successfully prevented moles from spoiling your yard:

1. Build a barrier. As discussed earlier, moles enjoy eating vegetables. If you have a vegetable garden on your property, creating a small barrier by digging a trench around three feet deep around the garden can help. Once the trench is complete, fill it in with rocks.

2. Purchase an owl nesting box. Predators like owls like to feed on moles, so investing in an owl nesting box could solve the problem. The best thing about this solution is that it will also prevent other pests like mice from coming into your yard.

3. Cats. Some cats love to hunt moles and other pests. If you have a house cat, consider bringing it out into areas where there is damage caused by moles.

4. Take away what they are eating. If you have grubs in your garden, removing them might work. Moles love to feed on grubs, so taking away what motivates them from entering your property might help.

5. Castor oil. Moles and other rodents seem to have a hatred towards castor oil. Castor oil is readily available in most home and garden stores. When dissolved into the soil of your yard, it will create a scent that will deter rodents from entering. Although it won’t kill the pest, it will force them to run away.

If you have tried all of the above and still you find these pests are making your life hell, perhaps it’s time to hire professionals to take on the task. Pest control experts will have plenty of equipment, chemicals, and experience to get the job done right. 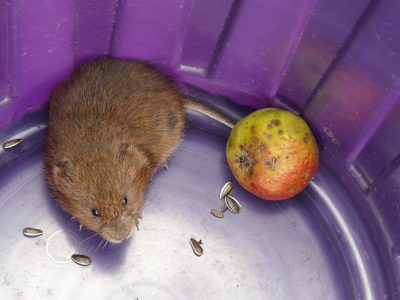 How to Prevent Voles From Damaging Your Yard

There are a few simple changes you can make to your yard that can help prevent these unwanted pests from moving in. One of the best ways of achieving this is by making sure your yard is clean and tidy. By cutting your grass on a regular basis and trimming plants and shrubs, voles will struggle to find shelter. Without shelter, voles will be unable to create runways. If there are piles of woods and weeds in your yard, remove them.

Although it might be nice watching birds fly into your property to eat food from your bird feeder, keep in mind that these items attract voles and different rodents. Voles love to eat bird seeds, and it might be the main reason why they infested your garden in the first place.

As mentioned earlier, voles like to gnaw on tree trunks. Consider placing some sort of protection around the lower part of the tree. Thick wire mesh seems to work well as long as it’s approximately 20 inches high.

Both are quite funny looking rodents, some even go so far as calling them cute! Because moles spend most of their time underground, they have these tiny little eyes. Because they don’t have an external ear structure, many assume they don’t have any ears. Their small bodies are covered in gray fur and they have a pointy snout. They have strong hands and wide feet which helps them to dig.

Interestingly, there are hundreds of different types of voles so it is often very hard to determine which is which. The most common moles that people talk about are meadow voles and pine voles.

Meadow voles are slightly bigger than most other voles. They spend most of their lives above ground and they like to gnaw on plants and fruit trees above ground. These rodents look very similar to a mouse but with a tiny tail. Similar to moles, their ears are hidden and they have little black eyes.

Pine voles are smaller and they spend most of their time underground. If you notice that the root of your crops is damaged, it’s probably safe to say you have pine moles living under your land. All voles have little orange teeth that they use to eat food.