Let’s play a round of association game. What pops to your mind when you think about being relentlessly pursued by a cougar?

To some, it probably sounds like a grand old time. On the other hand, other will probably want to run for their lives.

This Utah man will from now on be firmly in the latter camp. While on a run at a forest trail, he experienced the longest six minutes of his life while being chased by an irate mountain cat.

Kyle Burgess is a 26-year-old regular guy from Orem, Utah. He was jogging along the trails near Slate Canyon on October 10, when he came across what he thought were bobcats on the road.

“Really, I didn’t know what they were, and I usually pull my phone out like, ‘Oh cool, animals,'” Burgess told KSL News. And true to his habit, he started filming the creatures.

And then he realized that they weren’t bobcats. They were cougar cubs.

You know how they say you should stay away from bear cubs if you see them because the mother might be close by? Well, apparently the same goes for cougars.

And when the Mountain Lion Mama emerged from the bushes next to Burgess, oh boy was she not happy. 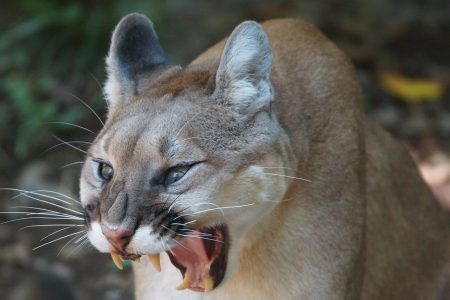 His video, which Burgess has conveniently posted on YouTube, details six minutes of terror as he tries to leave the scene in a calm manner. The cougar, though, is having none of that.

“Oh ****. Holy ****” Burgess succinctly summarizes his feelings as the mountain lion begins to follow him along the trail.

As he backs off, Burgess begins to yell and shout at the big cat.

“Go away! I’m big and scary!” he shouts. The cougar doesn’t seem all that convinced, so Burgess decides to change tactics.

“You’re good. You’re a good little kitty cat,” he pleads with the animal. But she’s clearly not in the mood for flattery, and throughout the entire video, the cougar keeps stalking after Burgess.

At several points you can see the cat hissing at him. And then, she lunges at him.

Lucky for Burgess, the cat is only looking to scare him off. Or perhaps she’s intimidated by Burgess spirited: “No! **** you, dude!”

But still, the chase continues.

After a couple more minutes – and couple more interrupted attacks – Burgess decides he’s had enough. He picks up a rock and hurls it at the mountain lion.

Then, finally, she turns around and runs off.

After the cougar was gone, Burgess had two options. He was nearing the end of the 10-mile trail loop, and he could either hike seven miles back the way he came… Or try moving through the cougar zone again.

After about a half hour, he decided to brave the trail ahead, Burgess told Deseret News. Arming himself with a stick and a rock, he began to slowly advance along the trail.

At some point, he came across some other hikers. When Burgess asked if they’d seen a mountain lion, they laughed.

But their faces fell quickly when Burgess showed them the video he had shot less than on hour ago on the very trail they were standing on.

He later recounted to reporters that after the incident, he wasn’t quite sure what he was supposed to feel.

“I felt for sure like ‘this is going to hurt, this won’t be fun,’ especially all those times where she kind of pounces at me,” he said.

He described the lioness as both beautiful and scary. He was so sure he was about to get mauled that at times he remembered simply closing his eyes and bracing for pain.

“It was kind of like, ‘OK, well this is going one of two ways. What’s the outcome going to be?’”

Luckily, the outcome was that neither was hurt.

Scott Root, a conservation outreach manager at Utah Division of Wildlife Resources (DWR), told Deseret News that once Burgess reported the incident, officers from DWR went to the area to look for the lions.

They found nada. Root said that hopefully that means that the lion family has moved on from the trail and won’t be bothering any more hikers.

Root added that Burgess did pretty much exactly what you’re supposed to do if you come face to face with a mountain lion.

“He backed away, he didn’t go toward the mountain lion or her kittens, he made a lot of noise,” Root listed.

“He stayed large, he stayed loud and he backed away from the area for quite a while. I think he did everything really well.”

The only things he can recommend doing in addition are not hiking alone, using bear spray, and avoiding mountain lion territories during dawn and dusk when the animals are the most active.

One key piece of advice that Root has for any hikers out there is to appear large and intimidating if a cougar starts approaching you. An important part is to never try to kneel or crouch.

As Burgess did, throwing rocks or sticks at the animal is also a good way to get it to back off. But the best way to avoid being mauled by a cougar is to stay vigilant if you’re moving through their neck of the woods.

Should you find yourself pursued by the other kind of cougar… Well, there you’re on your own.