Remember that American ex-military boss who said UFOs are real and we need to prepare for them? Well, it turns out that the Pentagon was listening.

On November 23, Deputy Secretary of Defense launched a new investigative force. It has one purpose, and one purpose only — to observe, track, and identify UFOs (or unidentified aerial phenomena, as the army likes to call them now).

The Airborne Object Identification and Management Synchronization Group (AOIMSG) — rolls right off your tongue — isn’t the first DoD agency to keep tabs on UFOs, though. It will replace the Navy-operated Unidentified Aerial Phenomena Task Force (UAPTF).

“The AOIMSG will synchronize efforts … to detect, identify and attribute objects of interests in Special Use Airspace (SUA), and to assess and mitigate any associated threats to safety of flight and national security,” the DoD said in a statement.

According to the defense department, the new agency is needed to better address the appearance of UFOs near military training facilities. According to a DoD report from June 2021, the current processes and policies to do so aren’t properly scaled. 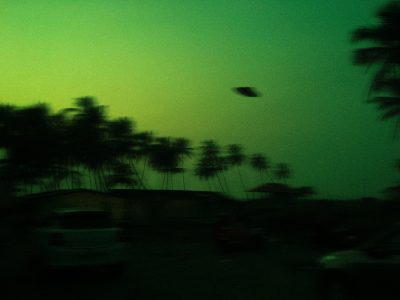 The foundation of the AOIMSG (that really is one awful acronym) comes in response to an actual, genuine, bona fide UFO encounter. We’re sure there are other reasons as well, but this incident was one contributing factor.

The UFO encounter dates back to 2019. At that time, the US Navy captured several pyramid-shaped UFOs on video.

The video shows a flashing, triangular object flying slowly at a height of around 700 feet. It doesn’t do anything particularly interesting, but the military has no idea what the thing is.

The only thing we know for certain is that the footage is genuine, according to the Pentagon itself.

“I can confirm that the referenced photos and videos were taken by Navy personnel. The UAPTF has included these incidents in their ongoing examinations,” Pentagon spokesperson Susan Gough told The Black Vault.

According to ScienceAlert, the DoD has been able to explain some other UFOs encountered by military personnel. This investigation into the pyramid UFO, however, was closed as inconclusive.

The Pentagon actually has an entire stockpile of UFO footage. The DoD says that most of the 120 UFO encounters over the past 20 years have been solved, but some remain mysteries.

One of such mysteries is what Navy pilots caught on camera in November 2004 and January 2015. The Pentagon declassified the videos in April 2020, and to this day no one knows what the objects seen on the footage are.

The videos show various UFOs doing things that human-made airplanes shouldn’t be able to do. Among other things, the UFOs fly against the wind at extreme speeds, do turns and spins that should be impossible, and in some cases disappear into thin air.

Although the videos were classified, they got leaked to the public in 2018. It’s probably no surprise that a lot of people thought the videos were fakes made by UFO nuts.

However, to quell the rumors, the DoD decided to confirm that footage is genuine.

In the name of fairness, though, none of the UFOs caught on camera are necessary extraterrestrials. The defense department isn’t interested in them because they think aliens are attacking Earth.

Instead, it’s more likely that the objects could be experimental, advanced aircrafts from other nations. Considering the seemingly impossible feats they’re capable of, it makes sense the DoD would want to know more about them.

This theory isn’t completely baseless, either. For example, in July 2021, China tested a new hypersonic airplane. The aircraft can circle the globe at five times the speed of sound while popping off missiles.

The U.S. government had no idea China had developed such technology. If the plane had been caught on camera, it most definitely would’ve triggered some UFO flags.