Snow is coming and so are snow sports. But if you need to transport your snowmobile, please don’t do it by throwing it on top of the roof of your car.

Or, maybe do. But know that you will get pulled over if seen.

In Clayton Wisconsin, a state patrol officer pilled over a car with a snowmobile strapped to the top of the roof. The car was driving near U.S. 63 in Polk County.

It was about 1:20 p.m. on Sunday when the trooper saw the sled perched on the top of the car.

“Folks don’t try this at home,” a tweet posted by the Northwest Region of the Wisconsin Department of Transportation said. “This isn’t a safe way to transport a snowmobile. If you’re transporting equipment this winter, you are advised to safely haul it secured on a trailer or in a truck.”

Matthew R. Schmit, 23, was issued a warning when he was pulled over. He was told that it was ill-advised to haul his snowmobile in this way as it was “over width.” 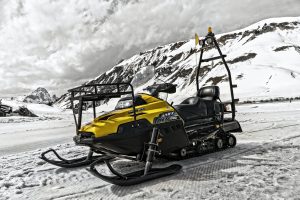 He was also cited with a seatbelt ticket, for failure to wear a seatbelt.

Schmit said that he had just purchased the snowmobile and he was driving it over to a friend’s house to show off his new toy.

“I know it looks sketchy, but we had it strapped down and shook it,” Schmit said. “Up like in this kind of region, stuff like this gets seen all the time, but more like the back roads.”

Crazy enough, this isn’t the first time that this has happened, and clearly not the last. In January, a 22-year-old Illinois resident went viral on Facebook when he did the same thing.

“I thought something was going to happen because there were people speeding down the highway trying to take pictures,” Tommy Mecher said.