First things first, if you’re sensitive to violence, maybe go read something else. This stuff is about to get graphic.

A 42-year-old Oklahoman man is under arrest, suspected of committing three murders. During the investigation, authorities have revealed gruesome details of the murders, including attempted cannibalism.

No charges have been brought yet against Anderson, due to office closings related to severe weather, said Oklahoma State Bureau of Investigation (OSBI). Nonetheless, Anderson is being held in Grady County Jail.

The OSBI says that Anderson broke down during his arrest and confessed to the murders. In his confession, he detailed how he murdered three people, stopping only to cook a human heart. 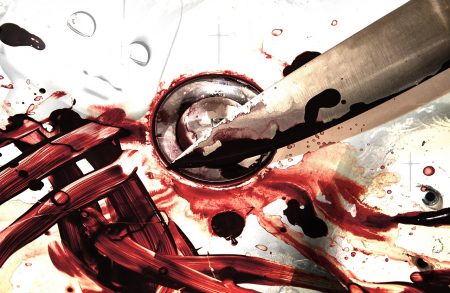 Death in the Family

The horror show began on February 9. At that time, according to OSBI investigation, Anderson was staying at his uncle’s house.

On that day, the police received a 911 call from the Pye residence, but the caller suddenly hung up. Officers rushed to the house and knocked on the door, receiving no answer.

But while nobody came to the door, they could clearly hear pleas for help from the inside. Left with no other choice, the cops knocked down the door.

Inside the house, they came face to face with a bloodcurdling scene. Leon and Kaeos lay dead with stab wounds.

Delci was seriously injured, also due to a knife attack. And then there was Lawrence, with an injured right hand, throwing up in the living room.

Leon and Kaeos were pronounced dead at the scene, while the other two were rushed to a hospital. Delci remains hospitalized, but The Oklahoman reported that her condition is non-threatening.

While at the hospital, Anderson was placed under arrest under suspicion of carrying out the killings and maiming. Under custody, it seems Anderson’s conscience finally caught up with him and he confessed to killing one more person.

Anderson told the investigators that before attacking the Pyes and their granddaughter, he went to their neighbor Blankenship’s house. Once there, he forced his way in by knocking the back door down with his shoulder.

Inside the house, Anderson was greeted by Blankenship and her two German Shepherds. The police didn’t say what happened to the dogs, but considering what Anderson did to Blankenship, it can’t have been anything good.

Anderson killed Blankenship with a knife. Once she was dead, he proceeded to cut out her heart and took it back to the Pye residence.

There, he cooked Blankenship’s heart. But that wasn’t gourmet enough – in true Hannibal Lecter fashion, Anderson also whipped up a side dish of potatoes.

“He tried to make Delsie and Leon Pye eat the heart before he attacked them,” an OSBI agent said according to Chickasha News.

Anderson said that consuming the heart would “release the demons,” the agent added.

The murders have sparked outrage in Oklahoma, and not only because of their depraved nature. Anderson has behind him a long criminal history, and was in fact just released from prison in January.

He went to prison for the first time in 2006 for possessing crack cocaine and threating his then-girlfriend with a gun. He got out in less than two years.

In 2012, Anderson was sentenced again for 15 years’ imprisonment for dealing crack near an elementary school. This time, he ended up serving a bit over five years of his sentence.

After less than five months as a free man, Anderson went back behind bars after confronting a woman at a church parking lot. He was in possession of a firearm, which he wasn’t allowed to have due to his earlier felonies.

While in jail, Anderson pleaded guilty to several drug and gun offenses during his incarceration. His probation and parole officers described him as “a threat to both society and himself,” reported The Oklahoman.

Despite such an impressive criminal record, Oklahoma Governor Kevin Stitt saw fit to commute Anderson’s sentence. Stitt had been told that Anderson intended to move to Texas with his daughter and work at an oil field for his son-in-law.

But that never happened. Instead, Anderson showed up unannounced at his uncle’s house after giving prison authorities that address as the place he was going to stay at.

Anderson’s release hasn’t frustrated only the Oklahoman public. Law enforcement authorities are also voicing their criticism of the state’s system.

“This has to be addressed by the Legislature, sooner rather than later, because more people are going to get killed,” Grady County District Attorney Jason Hicks told The Oklahoman.

“We’re seeing this all over the state. Repeat offenders go to prison. They’re not there very long. And they come home and they’re committing crimes just like this.”

He also questioned why his office had to object to repeat offenders being released “every step of the way”.

“We do our job and get them into prison. And then we tell them: ‘This is somebody that’s really bad and they need to stay there.’ But that’s not good enough. We shouldn’t have to do anything else to keep them in prison,” Hicks concluded.