Mayonnaise is many people’s favorite spread, whether it’s slathered on BLTs and burgers or used as a condiment on fries. But who knew it could also help wildlife ravaged by an environmental catastrophe?

Thick globules of oil tar started washing up on the shores off Israel on February 18, according to LiveScience. Since then, the oil spill has expanded into “one of the most serious ecological disasters” in the region, as Israel’s Nature and Parks Authority (NPA) put it.

Just one kind of animal suffering from the spill are sea turtles. They breathe and feed underwater, and so are particularly susceptible to swallowing the sticky oil tar.

“They came to us full of tar. All their trachea from inside and outside was full of tar,” Guy Ivgy, medical assistant at Sea Turtle Rescue Center operated by the NPA, told AP News.

Many turtles have washed ashore already dead, but some have still clung to life. At the moment, the sea turtle center is treating 11 endangered green sea turtles. 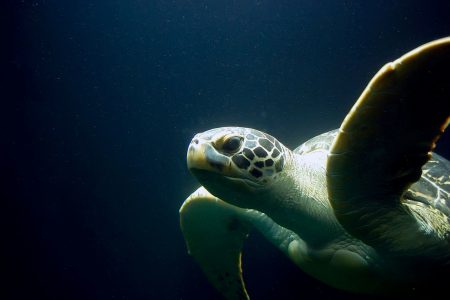 Mayo to the Rescue

To save the ailing turtles, the environmentalists at the center have turned to a creative solution. Namely, they’re using mayonnaise to treat the turtles.

The recovery process for one turtle treated at the NPA center takes roughly two weeks. During that time, they will ingest copious amounts of the white condiment.

“We continue to feed them substances like mayonnaise, which practically clean the system and break down the tar,” Ivgy explained.

Once the tar detaches from the turtle’s trachea, it starts its journey through its digestive tract. Eventually, the sea creature can just poop out the oil tar.

Sounds unpleasant, but hey – if it works, it works.

The Science of Mayonnaise

But why would people of science turn to mayo out of all things to save turtles? The answer lies in the condiment’s basic structure.

In case you don’t know how mayonnaise is made, here’s a little cooking lesson for you. Mayonnaise is generally made out of oil, egg yolks, and some sort of acidic product, like lemon juice.

First, you have to whisk the yolks and acid together. Then, you can start slowly pouring in the oil while continuously stirring the mixture.

If you did it right, you will end up an emulsion – a mixture of oil and water droplets equally dispersed into a uniform sauce. In other words, mayonnaise.

The sauce holds together because of molecules called lecithin found in the egg yolk, wrote LiveScience. Lecithin is hydrophilic on one side, meaning it sticks to water, while the other side is hydrophobic and repels water.

The lecithin molecule surrounds an oil droplet, with the hydrophilic sides facing out. This reaction allows the mayonnaise to stick together, even though water and oil are generally thought not to mix.

Flushing the Tar Out

It’s this same chemical reaction that allows mayonnaise to help the turtles. When they eat mayo, the condiment’s hydrophobic oil part bonds with the tar stuck to their throats, thinning it down while it’s at it.

Then, the lecithin bonds with the oil-tar mixture just like it does with mayonnaise’s regular oil. With the outside-facing hydrophilic side, the lecithin helps detach the tar and flush it down the digestive tract.

The lecithin barrier around the tar not only makes it less sticky, but it also makes it slightly less toxic. That’s a good thing, because swallowing globs of poisonous tar doesn’t sound like a great idea.

The environmental workers aren’t just making things up as they go, either. Earlier scientific studies have shown that mayonnaise is effective in treating tar burns in humans as well.

So, after a week or two of a mayo-heavy diet, the turtles are ready to be released back into the wild, said Ivgy. Can we get a hurrah for mayonnaise?

Unfortunately, the sea turtles that have to devour mayo can consider themselves the lucky ones. Other animals suffering from the same oil spill are far beyond the help of any condiment.

According to Israel’s Environmental Protection Ministry, more than 1,000 tons of oil have by now washed ashore from the Mediterranean. With it, the tide of oil has brought many dead sea creatures.

One of the largest was a 55-foot-long fin whale that NPA discovered on a beach in southern Israel. Upon necropsy, NPA veterinarians found gallons of a black liquid in the whale’s stomach.

They still have to analyze the stuff to make sure what it is. But it’s probably a safe bet to say it’s oil.

It’s currently unknown what caused the oil spill. Israel’s government has put in plays a strict gag order on its investigation, meaning that Israeli press is not allowed to publish any details about a possible suspect.

Seems a bit shady, but we can’t really make any judgements until the facts come out. However, the radio silence doesn’t make it any easier for environmental authorities and volunteers to tackle the spill.

“The greatest fear is that there is a lot more tar in the sea right now that is poisoning wildlife, and still hasn’t reached us,” University of Haifa marine scientist Dor Adelist told the Times of Israel.