In a story twist that could’ve popped straight out of a Pixar writers’ brainstorming session, a curious chicken recently went on a journey of a lifetime. And just like the studio’s best animated features, this animal story has a happy ending.

Reba is a Rhode Island Red hen living in Fair Oaks Ranch, Texas, as a pet of the Matthews family. Her quiet chicken life was interrupted on July 1 when she unwittingly became a stowaway in a delivery driver’s car.

On the morning of that fateful day, Reba was outside with her two chicken sisters, Wynonna and Patty. Somewhere in the yard her family’s dog Scout was running about.

Then, around 10 am, a delivery driver from Instacart arrived at the yard. A video from the Matthews’ security camera system shows him leaving the trunk of his car open as he goes to deliver a package.

The strange car must have piqued Reba’s curiosity. The video shows her flapping up to the side of the car and eventually hopping inside the trunk. Her two sisters, perhaps blessed with more common sense, continued with their chicken business on the ground.

The delivery driver, having dropped off his package, then returned to the car. Distracted by his phone – most likely looking up his next delivery address – he closed the trunk without looking inside.

He got into the driver’s seat and took off… Unknowingly taking Reba with him. 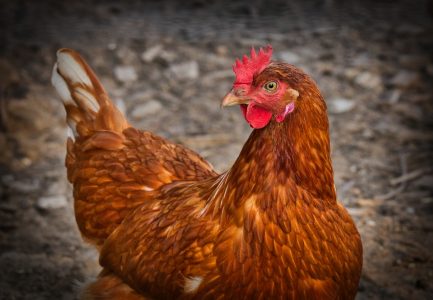 The Case of the Missing Hen

Several hours passed before Reba’s owners Jennifer and Justin Matthews even noticed that she wasn’t around.

“I didn’t see her when I took them food and water. I assumed she was in the coop laying an egg,” Mrs. Matthews told Express News.

“It wasn’t until later when I realized she was gone that I thought maybe a raccoon or a hawk had taken her. But typically, you’d see a bunch of feathers if that happened.”

Wanting to confirm whether Reba had met such a gruesome end, the Matthews pulled up their security camera footage. Instead, the video revealed the Instacart driver’s unintended chicken-napping.

“She always had more of a personality than the others. I wasn’t surprised to see her jump into that car,” said Mrs. Matthews.

The Matthews rushed to the phone and called Instacart. A helpful customer service representative connected them with the driver and acted as an interpreter from Spanish to English.

After concluding his business at the Matthews house, the driver had headed for his next stop – a local Costco. He told the family that he had discovered Reba when he opened his trunk and the confused hen had fluttered out. He’d assumed it must’ve been some kind of a prank.

At least the Matthews now knew Reba was alive when she got to Costco. Mr. Matthews hopped into his car and drove over. Unfortunately, he saw no sign of Reba in the parking lot.

He asked some of the Costco employees whether they’d seen an out-of-place chicken – or the remains of one – near their store. Mr. Matthews received both good and bad news.

The good news was that the employees had indeed seen a “fat chicken” running around the parking lot.

The bad news was that some ladies in a white car had picked her up and driven off.

At this point, the Matthews hopes of ever seeing Reba again were starting to fade. But when you love your pet, you will take any measures you can to get them back.

“I was glad to hear she hadn’t been run over. We posted about it on Facebook, but I thought there’s no way we’d ever get her back,” said Mrs. Matthews.

The Facebook post on Mr. Matthews profile, with the video from their security camera, quickly went viral. Within 24 hours it had gathered more than 154,000 views and 2,800 shares.

Social Media to the Rescue

Meanwhile, in San Antonio, sisters Susan Almarez and Zobeida Perry came home from Costco with a chicken. Only, this chicken wasn’t wrapped in plastic and ready to roast.

“We were looking for a parking spot when we saw this chicken walking around. We were worried she’d get run over, so we stopped to try and catch her,” Almarez explained.

“Who goes to Costco and comes home with a live chicken? We were laughing the whole time.”

Once they’d caught Reba, the sisters wrapped her in a towel and took her to the Perry house. There, they placed her in a cage they usually kept bunnies in.

Almarez posted about their unlikely incident on Facebook. Very soon, she got a message from a friend linking her to a news story about a lost chicken. Then more messages started coming in.

“Apparently, all of San Antonio was looking for this chicken. When I called to tell my sister, she was a little sad. She’d already fallen in love with her,” said Almarez.

Still, Reba had a home and it was only right to return her there. Almarez connected with the Matthews through Facebook and on July 3 she pulled up to their driveway.

“When we took her out of the kennel in my sister’s car and put her on the ground, she took off like a thoroughbred out of the gate, running to Wynonna and Patty. It was the cutest little chicken run I’ve ever seen,” Almarez laughed.

Reba’s journey made an impact on everyone who crossed her path. Perry said she is now determined to start raising chickens. Mr. Matthews is looking to turn Reba’s story into a children’s book.

Reba herself is back to laying eggs as if nothing ever happened. But she does have her own Instagram now.