First things first, we here at Oddee are all too aware that the current political situation in the U.S. is tense, to put things gently. Do take our word that we’re not trying to make any comment in support of anybody here.

But what we are here to do is report on odd news. And when the raging green Avenger strikes in Hollywood off the silver screen, it certainly is an odd incident indeed.

The Hulk – or at least a man dressed as The Hulk – began to vent his rage on the Hollywood Walk of Fame on October 2. Around 5 a.m., The Hulk showed up at the street, looking for a certain star, the TMZ wrote.

Namely, he was looking for the star dedicated to President Donald Trump. And of course, he found it. Why wouldn’t he, the stars are sort of right there.

He then began, in a very Hulk-like fashion, to smash the star apart. But while the real Hulk probably wouldn’t have needed more than his trusty fists, this man wasn’t quite so powerful.

Instead, he hacked the star apart with a pickaxe. According to law enforcement officers, the man was able to destroy the memorial beyond recognition.

As to our best knowledge, no one has been arrested yet. But once someone is, the perpetrator might be looking at a hefty bill.

Police source say that they have filed a felony vandalism report on the incident. Considering that the Hulk-wannabe caused an estimated $5,000 dollars in damage… The big green guy may have to cough up some green. 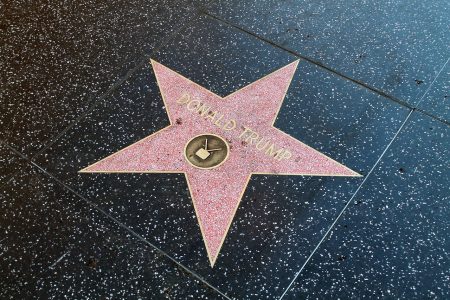 Alright, let’s drop the pretense. The vandal wasn’t the Hulk, but just some disgruntled guy in a costume looking to let out some anger.

But here’s the thing, though. If he’s looking to make some kind of a protest against the President, he might have wanted to pick something that has a bit more to do with him in the first place.

To begin with, Trump doesn’t own the star. All the stars on the Hollywood Walk of Fame are managed by the Hollywood Historic Trust, Hollywood Chamber of Commerce President and CEO Rana Ghadban told TMZ.

“Any star, which is vandalized or destroyed, no matter which honoree it belongs to will be replaced by the Hollywood Historic Trust, a non-profit, non-partisan group,” she said.

So it’s not like the man vandalized Trump’s property. What he did was destroy a public landmark owned and maintained by a non-profit organization.

Sure, Trump paid for the star back in the day. According to AJC, anyone nominated to get the star on the Walk of Fame will have to pay $40,000 in fees for installation and continued maintenance.

But again, Trump’s star was included in the television section of the Walk of Fame in 2007. If we know anything about the maintenance costs of public spaces, his $40,000 has been spent a long time ago.

We can say that the money is gone with confidence, because this is far from the first time the Trump star has borne the brunt of public displeasure. Since the beginning of his presidency, the star has been wrecked in increasingly more imaginative ways.

A History of Defacement

Let’s go back in time in chronological order, shall we? In August, Trump’s Hollywood star was spray painted completely black.

Just in case the vandal’s message wasn’t completely clear, they also left a bag of poop on the defaced star. TMZ didn’t report whose poop it was, but we’re going to hope that it was dog poop. We get it already, there’s no need to crap in a sack yourself

Turn the clocks back to November 2019, and we have another case of the star getting a dose of paint. This time, a person walked up to the star in bright morning sun, pulled out a can of white paint, and sprayed over Trump’s name.

In April 2019, one more person played with paint around the star. That time, though, they weren’t satisfied with just painting over the star.

In addition, they wrote the phrase “Putin’s B****” on top of it. The Hollywood CoC cleaned the mess in just four hours.

Let’s leap even further back, to July 2018, and we’ll find someone who may have inspired the Hulk man. On that morning, 24-year-old Austin Clay took a pickaxe to the star, completely destroying it.

So what we’re trying to get to here is that Trump’s 40 grand are already most likely gone. Now, wrecking the star only drains the funds of the Hollywood Historic Trust.

“When people are angry with one of our honorees, we would hope that they would project their anger in more positive ways than to vandalize a California State landmark,” bemoans Ghadban.

No matter your political leanings, getting slapped with a fine for public vandalism is not a good look. Just saying.