Dinosaurs were a bunch of fascinating and often strange creatures, and there are a lot of mysteries that still surround them. For example, paleontologists just recently made the first educated guesses of how they had sex, thanks to a fossilized butthole.

But now they’ve found an even stranger animal that lived when dinosaurs still walked the Earth. And it’s not a reptile – this thing is a bona fide mammal.

The roughly opossum-sized beast now bears the name Adalatherium – which translates in English to “crazy beast.” And this critter definitely lives up to that name.

The Adalatherium is something of an oddity in paleontology in more ways than one. To begin with, the researchers have on hand the animal’s entire preserved skeleton – not exactly a common occurrence in the field.

Thanks to the complete skeleton, scientists have been able to marvel at Adalatherium’s bizarre body structure in all its glory.

“Knowing what we know about the skeletal anatomy of all living and extinct mammals, it is difficult to imagine that a mammal like Adalatherium could have evolved; it bends and even breaks a lot of rules,” Dr. David Krause from Denver Museum of Nature & Science – the lead of the Adalatherium research – told Science Daily.

So the little thing was a rebel, huh? Well, let’s see just how weird it is. 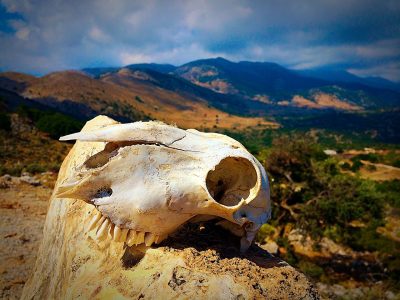 First of all, let’s establish the when and where Adalatherium lived. According to the scientists, it shared the Gondwana supercontinent some 66 million years ago with dinosaurs, giant crocodiles, and other lovely beasties.

If you don’t know where Gondwana is, that’s understandable. The giant land mass broke apart millions of years into what we now recognize as Africa, South America, Australia, Antarctica, India, and the Arabian Peninsula.

Adalatherium is (or was) part of a group of animals called gondwanatherians. This group was first discovered in the 1980s and – until recently – all that remained of it was pieces of jaw bone and a few teeth.

Still, even with such meager evidence, it was clear to scientists that gondwanatherians were very different from modern mammals. You can imagine their excitement, then, when the full Adalatherium skeleton surfaced on the island of Madagascar.

The researchers thought they would finally get answers to all the questions they had. They could finally figure out how and where gondwanatherians fit into the mammalian family tree.

Well, they absolutely got some answers. But with every answer, the Adalatherium brought up two other questions.

Legs that Go all the Way… To Somewhere

If you slap muscles and skin on top of the Adalatherium skeleton, you get something that might resemble a badger. That is, if you have poor eyesight and lost your glasses.

According to the researchers, the similarities to modern mammals stop as soon as you take even a little bit closer look at the animal. 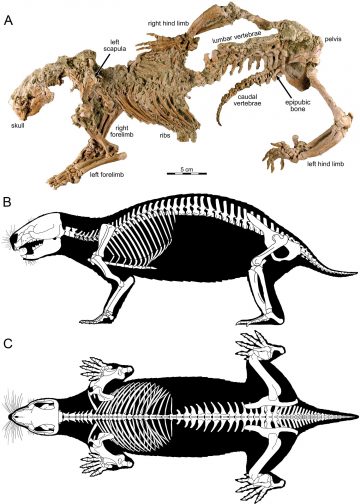 “Adalatherium is simply odd. Trying to figure out how it moved, for instance, was challenging because its front end is telling us a completely different story than its back end,” said Dr. Simone Hoffmann, the study’s co-lead from the New York Institute of Technology.

Indeed, the front and hind legs of the Adaltherium simply don’t match. In the front, its two legs are positioned under the body, just like most modern mammals.

On the butt end, though, the hind legs sprawl out to the sides, like those of a crocodile or a lizard. How the thing walked with that kind of a leg setup is anyone’s guess.

The pairs of legs don’t match up in musculature either. The back pair is strong and burly, with big claws, which the scientist say could suggest is was a seasoned digger – like the badger we just mentioned.

But the front doesn’t support this theory. The front legs are much leaner, resembling those of today’s fast-running land mammals.

What’s in Your Mouth?

Oh, but there’s more. Adalatherium gets even more bizarre when it opens its mouth.

No, we don’t know if it made some kind of a ridiculous noise. The weirdness is all about its teeth.

The scientist agree that the Adalatherium was an herbivore. And that’s all they can say, because the rest of its mouth is an even more of a mismatched mess than its legs.

In the front, Adalatherium had a pair of large, constantly growing incisors, like today’s rodents and rabbits. Behind them are rows of… Something.

The creature definitely has teeth, but they’re teeth that don’t really compare to anything. We would describe them, but that’s kind of hard to do when even the scientists say they have no idea what they’re looking at.

Suffice to say the Adalatherium has teeth that don’t resemble those of any other animal, living or dead. And the bones on its snout have a weird hole on top for some reason. The researchers don’t know why.

But according to the research team, despite all its weirdness, Adalatherium is an important clue to the development of early mammals. That’s applies double to the animals of Madagascar.

In case you weren’t aware, Madagascar is one strange place. Just go look at some pictures of the plants that grow there.

Krause and Hoffman say that when Adalatherium lived, Madagascar had already been a separate island for more than 20 million years. That could explain why it evolved into a creature that’s unlike any other.

“Islands are the stuff of weirdness, and there was therefore ample time for Adalatherium to develop its many extraordinarily peculiar features in isolation,” said Krause.

So, if nothing else, Adaltherium can help us understand how and why an animal that shouldn’t be, was.

“Adalatherium is an important piece in a very large puzzle on early mammalian evolution in the southern hemisphere, one in which most of the other pieces are still missing,” Hoffmann concluded.