Europe is known for nothing if not being lavish, eating delicious foods, friends, family, and truly enjoying the holiday, and for that matter, life.  Christmas dinner is no different and in countries like Lithuania, Poland, and Ukraine all offer their own unique varieties of an intricate twelve-dish Christmas Eve feast. There is no milk, eggs, or meat allowed though due to regulations of the Nativity Fast practiced by Orthodox and Eastern Catholic churches. Though this fast is not observed as much as it once was it is still tradition to keep the feast to a pescatarian and grain-based spread.  The meal typically includes a clear beetroot soup called barszcz. It’s served with little dumplings. There are usually two types of fish, a cold dish with carp jelly and a hot fish. You will also find pierogis, crepes filled with sauerkraut or mushrooms. Other courses include kompot which is a mixture of different stewed fruits, ground poppy seeds mixed with honey and a variety of other cakes. There are also a full host of traditions including the ritualistic breaking of wafers to the scattering of hay on the table to commemorate the birth of Christ and the fertility of the new year. 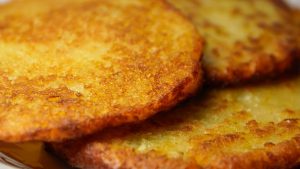 Latkes, in one form or another, are an important part of the Hanukkah tradition. These are often served with applesauce. The food served represents the meaning of the holiday, so it’s often anything oily like fried fritters, recognizing the Second Temple that kept the Menorah burning with oil for eight days. Other than that, brisket is traditional for the holidays and eaten wherever Hanukkah is celebrated. 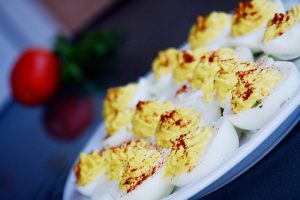 An Italian Christmas dinner is commonly The Feast of the Seven Fishes. This meal has seven different fish, all prepared differently. Often there is salted cod and calamari. In other areas they eat roasted lamb or boiled poultry, seasoned with sauce. And of course, the Italians like their dessert and panettone is a huge part of the Christmas feast. This cake is filled with candied fruit, chocolate, raisins, and nuts. Other sweets include torrone, nougat, marzipan, zeppole, cannoli, and pandoro. In the United States, a traditional Italian family Christmas feast is lasagna, chicken cutlets, and bracciole, an Italian meat that goes with the meatballs. For an, appetizer, they serve deviled eggs, popular at holiday parties and non-holiday parties alike. They also serve antipasto.

Greek families kick off their Christmas dinner with roasted lamb. Sometimes, depending on the region, you’ll find yiapakia which is brined and pork stuffed cabbage rolls. Christmas Eve holds a traditional making of the Christopsomo, a rustic sweet bread filled with raisins, nuts, cardamom, and cloves. This bread is decorated with a cross and serves as a delicious yet beautiful and traditional centerpiece for Christmas Day.

Where in the world do they celebrate Christmas the longest? It could very well be in the Philippines as they begin to celebrate the holiday as early as September! Christmas Eve starts with midnight mass and is followed by a grand Noche Buena feast. This feast features lechon. which is a spit-roasted suckling pig. Along with the pig you will find queso de bola, (a ball of cheese,) spring rolls, fruit salad, and pasta on the table. 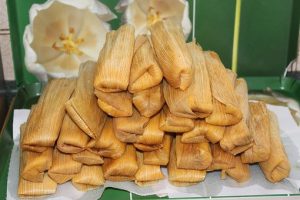 Costa Ricans enjoy tamales for Christmas. If you’ve ever made them, you know how time consuming and honestly tedious they are to make, hence only making them on special occasions. The whole family gets involved in the two-day process including filling the tamales, spreading masa on the banana leaves, and steaming the tamales for hours before they are ready to eat.

And last but not least, Finland. The Finnish serve up their Christmas dinner, buffet style. The tradition is called joulupöytä, which literally translated means Christmas table. On a Finnish table you will find ham, fish, and potato casseroles. They also serve rosolli, a colorful salad consisting of diced beets, potatoes, carrots, apples, and cream.

Now you know all about Christmas meals and what is eaten, where. Will this change or add to your Christmas dinner menu? The holidays are here and so are the holiday feasts!