Remember the ‘80s and the Satanic Panic? You know, that time when hysteric parents claimed everything from rock bands to Dungeons and Dragons was a secret plot to get kids to worship the Lord of the Pit?

A lot of things from the Tubular Decade have made a comeback lately, and apparently so has this phenomenon. At least if you look at this episode playing out in Canada.

A group of overtly concerned parents have launched a petition to get the principal of Eden High School in St. Catherines, Ontario, fired. The reason for the demands seems to be principal Sharon Burns’ professed love for heavy metal.

In particular, the parents seem to take issue with Burns’ association with headbanger legends Iron Maiden. In the now-dropped petition, they included two pictures Burns had posted on her official Instagram account.

The first one depicts Burns — in full Iron Maiden fan regalia — throwing the “devil horns” in front of a flag with a picture of the band’s mascot Eddie as he appears on their release The Trooper. The second one shows a toy figure of the skeletal mascot with a hand-written note reading “Eddie 666” on a car’s dashboard.

Clearly, liking a band enough to buy their merchandise and participate in their fan culture is grounds for termination from your job.

Well, that’s the case at least if you ask these parents. In their petition, they claimed the principal’s hobbies could have a negative effect on the “impressionable children” at the high school, reported Loaded Radio.

“We are deeply disturbed that the principal assigned to the school blatantly showed Satanic symbols and her allegiance to Satanic practices on her public social media platforms,” the parents said.

They went on to state that the school’s ideas were based on inclusion. But that doesn’t include showing your love for your favorite band, apparently.

“Openly displaying Satanic symbols (on a public social media platform) that directly goes against the principles of the vast majority of families who represent the school, is not inclusive,” the petition read.

“As parents we are demanding her transfer to another school. Please replace her with another principal who aligns with the values of the families at Eden and will not sabotage the teaching or upholding of those values and will not try to introduce impressionable students to Satanic practices or symbolism.”

After some backlash from the public, the parents felt they needed to clarify what they opposed. According to them, they weren’t concerned about Burns liking Iron Maiden, but her obvious, horrendous, unashamed love for all things “666.”

“If she had not posted a picture of her own handmade 666 sign, this petition WOULD NOT EXIST,” the parents wrote.

“Nobody cares what band she likes and this is not about her choice in what she listens to. That would be petty and nonsensical.”

Because this absolutely isn’t petty and nonsensical otherwise.

The Students Strike Back

But Burns can probably keep her job. That’s because the school’s students — you know, the kids of these parents — support her.

In fact, they stand behind her so much that they launched their own counterpetition, titled “We Need Mrs. Burns.”

“It is ridiculous that a couple of parents only judge her role as a principal only based on an Instagram post. About liking the band Iron Maiden. That’s it,” the petition reads.

The students go on to point out that Eden High School is a public institution instead of a Christian school. They say that if some parents don’t like the principal, they’re free to send their kids to another school.

The petition also addressed the claims that Burns isn’t inclusive due to her “love for Satan.”

“The principal has made so many efforts to remind students that Eden is a diverse place. She has even turned a whole room into a prayer room for students who are practicing religions other than Christianity, like practicing Islam,” they wrote.

“[Burns] has made Eden a safe space for so many people. She spreads nothing but love and kindness, and is probably one of the best and most enthusiastic principals the school has ever had.”

The students seem to have won this battle. The parents have taken their petition offline, and at the time of closing it stood at 553 signatures.

The students counterpetition, on the other hand, is still up and currently has nearly 22,000 signatures. Still, to appease the parents, Burns appears to have taken down the offending pictures from social media.

The parents really didn’t check what they’re going after, either. Iron Maiden is probably one of the least offensive heavy metal bands in existence. 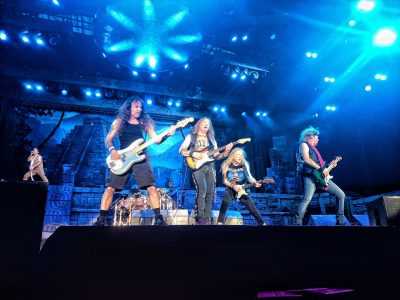 Their songs mostly deal with historical wars and your run-of-the-mill heavy metal fantasy themes. One song, written by the band’s Christian drummer, even has a religious message.

Sure, they recorded the song The Number of the Beast, which references the triple-sixes. But the actual lyrics read more like a classic horror story than a hymn to Satan’s glory.

Even the cover of the single should make the band’s stance clear. On the cover, Eddie holds Satan’s decapitated head after defeating him in battle.

That doesn’t really sound like something a band in league with the devil would do. It’s a good thing the principal didn’t happen to be a fan of something like Gorgoroth or Behemoth, though.

Even Ozzy Osbourne would’ve probably been worse, considering the Prince of Darkness attributed his not catching the coronavirus to being a “devil worshiper.”