What’s your least favorite smell in the world? Maybe it’s something strange, like raw tomatoes, or more typical, like skunk.

In this story, the smell was so bad, evacuations were made and people even got a bit sick. Six workers ended up getting hospitalized and 60 workers had to evacuate.

Twelve total postal workers received treatment for nausea after the incident Saturday. Dispatch sent police officers and firefighters to Schweinfurt in Germany, thinking that the package contained a dangerous gas or a harmful substance.

The package wasn’t dangerous though, or harmful. And it wasn’t a gar either. It was fruit, produce, just food.

Dorian fruit is pungent at the least. The fruit has such a strong scent, the smell alone has caused numerous evacuations globally.

The dorian fruit is known as the “king of fruits” across Southeast Asia. This spiky produce has a smell so bad, it’s been compared to rotten meat, sewage, and dead rats. 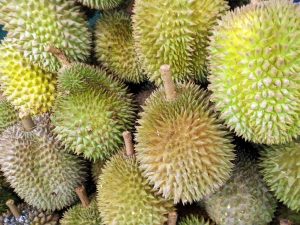 This overly smelly fruit is so strong, that one of its most prized varieties, named Malaysian Mustang King Durian, has never before been successfully imported to Britian, until this decade.

This spiny fruit gets its name from the word for thorn, “duri,” though the texture of the flesh is soft and the flavor is sweet. The smell comes from high levels of sulphates in the fruit.

Not only is this food source full of nutrients, but it’s also believed to be excellent for improving muscle strength and blood pressure. This fleshy, sweet fruit is high in sugar and fat.

An average-sized durian contains almost 1,350 calories. Here in the U.S., you can find Thai Durian in Asain markets, or already added to things like sweets, ice cream, and even main dishes.

Crazy that a fruit could have such a foul smell that it would cause people to think it’s a gas or dangerous substance, or much less clear out a place of business. Luckily durian is a seasonal fruit and you’d only ever encounter the smell during certain times of the year.