There’s a lot of weird stuff that goes through the mail system every day. But we’re ready to bet that most delivery staff don’t handle packages of animal testicles on a regular basis.

But scientists recently made such a bizarre delivery from Texas to Ohio. And it was all done in the name of saving the endangered species.

Let’s take a step back and start from the beginning. Our story begins in late July when an unfortunate ocelot from the Laguna Atascosa National Wildlife Refuge got into a fatal accident.

The ocelot, codename OM 283, was crossing the road FM 106 at an unsafe location. The foolhardy crossing ended in his demise.

Hilary Swarts, a wildlife biologist from the U.S. Fish and Wildlife Service, called OM 283 a “lovely boy.” According to her, the nine-year-old ocelot died because he got too adventurous.

“He had been using [protected wildlife road crossings] for nearly a year, safely, effectively. It was like: ‘This guy’s got it,’” Swarts told Texas Standard.

“And then he went on a different route and unfortunately got hit by a car.” 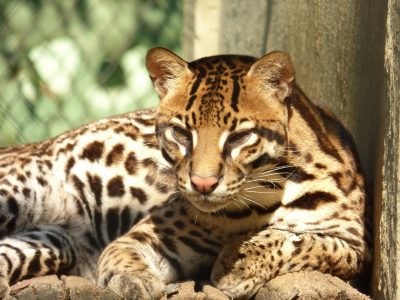 Now, ocelots are an extremely endangered species in the U.S. Their only population in Texas consists of only around 80 individuals.

As such, the loss of even one breeding-age ocelot is a serious blow to the whole community. Who knows how many offspring OM 283 could still have sired.

But wait, thought the ocelot conservationists. Could we still help OM 283 continue his lineage, even from the grave?

This question led to Thomas deMaar, senior veterinarian at the Gladys Porter Zoo in Brownsville, Texas, get one strange phone call.

“Swarts called me during the night, I believe, to tell me that she had a report of a recently dead ocelot, that she was going to pick it up and she was going to put it on ice and bring it in first thing in the morning. … We would try to collect the testes for the goal of collecting reproductive materials,” deMaar recalled.

And that’s just what Swarts did. She threw OM 283 into a freezer box and chauffeured him over to deMaar.

The animal experts weren’t cutting the ocelot’s balls off just for giggles, though. DeMaar says the procedure is a valid method for preserving the species.

“If the gonads are collected soon after death, you can actually retrieve either sperm or eggs and then subject them to freezing. They can be used at a later date to produce offspring in another uterus, so to speak,” he said.

The late OM 283’s testicles were now safely in a freezer box. But they didn’t have the equipment necessary to harvest his sperm in Texas.

So, the ‘nads got a one-way ticket to the Cincinnati Zoo in Ohio. Time wasn’t on the scientists’ side, though, since the genetic material starts deteriorating rapidly within 24 hours of death.

“We received the sample here 36 hours after the cat was hit by the car. That was extraordinary,” said Bill Swanson, director of conservation at Cincinnati Zoo’s Center for Conservation and Research of Endangered Wildlife.

As such, Swanson didn’t expect to find a single valid sperm. To his surprise, though, he couldn’t have been more wrong.

“I got 250 million sperm, which was a lot. I froze 20 semen straws, and theoretically, we could do 20 artificial insemination procedures with those straws,” Swanson explained.

“But in practice, that probably really means maybe 10 procedures because we want to maximize our chances to get a pregnancy.”

Swanson added that the quantity and quality of OEM 283’s sperm was a testament to the ocelot’s power and virility.

“May he rest in peace,” he concluded.

Ocelots are a species of spotted wild cat that lives mostly in Mexico, Central and South America, and some Caribbean Islands. The cats look a little bit like a housecat got busy with a leopard.

According to Swanson, ocelots as a species aren’t in danger. It’s just the U.S. population in Texas that’s at risk of disappearing.

“Once those ocelots are gone, we’ll probably never have ocelots in the United States or Texas again,” said Swanson.

One of the issues the Texan ocelots face is their dedication to their natural habitat. They live only in a small patch of thorn scrub areas right at Texas’ most southern tip.

“They’re really, really loyal to this one habitat type, and you don’t really find them anywhere else. Sometimes getting from one habitat patch to another requires crossing a road, and vehicle mortalities are the largest source of known mortality for ocelots,” explained Swats.

Of course, scientists would like to see the ocelots make babies the natural way. Unfortunately, with so few remaining cats and scattered population areas, they’ve started keeping their genes in the family, so to say.

We don’t need to tell you that incest is not a good idea. That’s why conservationists often end up using artificial insemination to try and preserve the ocelots.

A little bit of good news at the end — OM 283’s sperm has already been used. And the results look good.

“Her name is Lucy. She had eight ovulations on her ovaries which is a pretty large number for an ocelot, so that was very promising,” said Swanson.

Here’s hoping OM 283’s line will continue, even if he himself is no more.