There’s a disease spreading amongst scallops in the depths of the oceans. But this isn’t some deadly new virus or anything of the sort.

It’s just an outbreak of disco fever. It turns out that scallops are attracted to flashing lights just as a ‘70s boogie fanatic is attracted to the disco ball.

The discovery was made by a complete accident at a fishery consultancy in Devon, England. The marine scientists were trying to find a new way to catch crabs with brightly lit traps.

That experiment was a complete failure, at least in the crab department. But instead, it works like a charm on scallops.

Not only is the disco trap effective, but it’s also sustainable. Since there’s no need for bait or dredging, the method could save valuable fish stocks and marine habitats. 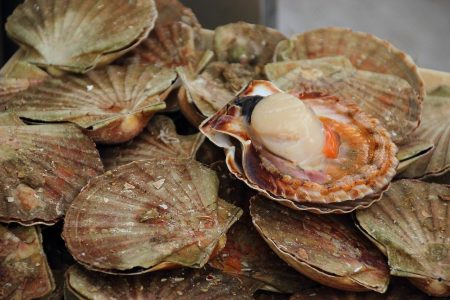 Go into the Light

The research about the scallop disco was recently published in the journal Fisheries Research. Its authors are marine scientist Dr. Rob Enever and his team at Fishtek Marine.

Enever specializes in discovering technological means to reduce the environmental impact of global fisheries. In 2019, he was working off the coast of Cornwall with local fisherman Jon Asworth.

Enever had designed a new kind of trap for catching crabs and lobsters. But the trial was a failure — after Asworth tried the traps, he saw no difference in his crab hauls.

He did notice something else, though. His crab traps were chock-full of European king scallops.

“Pretty much every pot that we hauled had scallops in them and yet every haul without lights had no scallops. It was conclusive, there and then,” Asworth told The Guardian.

“To have proof that lights can be used to catch scallops has got to have some awesome implications looking forward.”

That first scallop haul could’ve still been a fluke, though. As a man of science, Enever decided to do further experiments.

The traps with lights caught 518 scallops. That’s a few more than the lightless traps — they caught two.

And then there are of course the LED lights. They draw their power from two AA batteries, and Enever expects each light to function for 5-10 years.

“It’s like a scallop disco — illuminate the trap and they come in. It’s astonishing that no one else has discovered this before,” Enever said.

It really is, considering the number of eyes on scallops. They have more than 200 eyes across their mantles and their eyesight is great, at least by mollusk standards.

“Scallops are famous for their good vision. Scallop eyes have a surprisingly high degree of visual clarity and their attraction to artificial light is intriguing,” said Dr. Vicky Sleight, a marine biologist at the University of Aberdeen.

Enever and his team aren’t sure why exactly the scallops feel drawn to the lights. They suspect that the mollusks might be able to find plankton more easily in bright light, or they know that light scares away their predators.

Or maybe they’re just looking to boogie down.

Enever’s work isn’t done yet. He’s still refining his traps in tank experiments to make them as effective as possible.

One of the more recent discoveries he’s made is that scallops prefer blue light to white light. Enever hopes to eventually develop a trap optimized for catching scallops.

Should his invention reach commercial scale, it could have a significant positive environmental impact. The global scallop fishing industry is huge — in 2020, the commercial Atlantic sea scallop catch totaled 49 million pounds.

Unfortunately, the current methods to catch scallops aren’t ideal. The most common approach is dredging, which involves dragging a huge heavy net across the seafloor.

It goes without saying that the net can severely damage marine habitats. Unfortunately, there’s no real alternative.

The other method is to use scuba divers to go and handpick scallops off the seafloor. This method is less damaging, but it’s so expensive and slow that it’s just not worth it.

With his scallop disco traps, Enever aims to create a new alternative. One that’s effective, low-impact, and funky to the core.

“Our goal is to get as close to a commercially viable fishery as we can. I genuinely think we can do that, it’s got mileage,” said Enever.