This story sounds like it could’ve sprung straight out of a Looney Tunes skit. But hey, if it works, it’s not stupid.

In the U.K., rescuers were pondering how to save a dog that was in danger of being swept away by a rising tide. In the end, they resorted to cartoonish measures and dangled a sausage from a remote-controlled drone.

“It was a crazy idea,” Chris Taylor, the chair of Denmead Drone Search and Rescue, told The Guardian. Crazy, perhaps, but it got results. 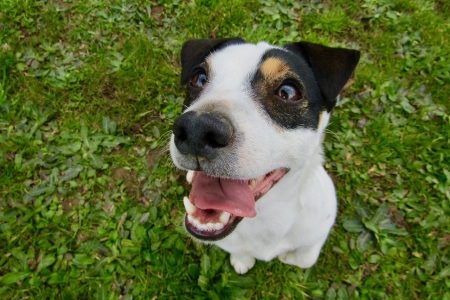 Meet Millie, a rescue dog from the town of Havant in Hampshire. She’s a Jack Russell terrier and whippet mix who lives with her owner, Emma Oakes.

Despite being a rather skittish little thing, she also has an adventurous streak due to her past. She demonstrated this on January 20 when she slipped out of her collar during a walk.

Enamored with her newfound freedom — and to Oakes’ horror — Millie sprinted off running. According to The Guardian, she disappeared, despite the entire surrounding neighborhood uniting to find her.

Finally, somebody spotted Millie. But unfortunately, the dog wasn’t any better after she was found.

Millie had run into the mudflats, a wetland area that gets covered by sea water at high tide. And the tide was coming in.

By this time, the number of rescuers had swollen to include official authorities. The cops, firefighters, and even the coast guard tried to coax Millie out of the flooding waters’ way.

But it was to no avail. The shy dog wouldn’t budge.

Trying to think of a way to get the dog to safety, the rescuers came up with an idea. Millie had been running around all day and she was probably hungry.

Perhaps they’d be able to lead her away from danger with a tasty morsel. But how would they get the treat to Millie across the sinking mud without scaring her off?

We assume at this point somebody pointed at the drones the rescuers had. The plan still couldn’t go ahead quite yet, though.

According to the U.K.’s Civil Aviation Authority regulations, drones have a maximum takeoff weight that they can’t legally surpass. After some quick math, the rescuers figured that they had enough free weight for a single sausage.

“One of the local residents on the beach where we were flying from supplied us with the sausages,” explained Taylor.

“I think they were from [the local supermarket] Aldi. The woman cooked them up for us and we attached them with string.”

‘Something We Had Never Tried Before’

The sausage drone took off and transported its yummy cargo towards Millie. As it made its way over to the dog, the operators wondered if the plan would work.

“It was something we had never tried before — the sausages were the last resort, as we couldn’t reach her by kayak or any other means,” Taylor said.

But to everyone’s delight, Millie turned out to be very co-operative. The pooch started obediently following the miraculous airborne sausage.

And it was just in time, too.

“Because Millie was hungry, it worked at luring her away from the danger to higher ground, which wouldn’t go underwater. If we hadn’t had got her away from that area, the tide would have come in and she would have been at risk of drowning,” said Taylor.

A Lesson about Sausages

Although Millie was now on drier ground, she wasn’t about to surrender. The dog took off once more as soon as someone approached her — luckily, she didn’t run back into the mud.

Rescuers eventually spotted Millie a bit farther inland from the coastal wetlands. This time, though, Oakes and her father were at hand.

All’s well that ends well. As soon as she spotted them, Millie sprinted straight into Oakes’ arms.

“Relief just poured over me. It was just absolutely fantastic to have her home,” she said after the ordeal.

“Millie really likes food and she’ll eat anything you give her … but she much prefers sausages. Meat is her favorite food, so dangling a sausage was probably the best thing they could lure her with,” Oakes added.

As for the rescuers, they now have a valuable case study about the power of sausages.

“Every dog and search operation is always going to be different, but if we were ever in a similar situation again, we would employ the same methods to lure the dog.”