When you think about nuns, you might be picturing solemn, decent women dedicated to contemplation and prayer. But this monastic duo from Ireland doesn’t give a hoot or a holler about such stereotypes.

A pair of nuns from County Cork southern Ireland are in hot water for breaching COVID-19 pandemic orders. The sisters, belonging to order of the Carmelite Sisters of the Holy Face of Jesus, traveled in December 2020 to attend an exorcism and a mass in Dublin.

At the time, travel within Ireland was banned due to pandemic restrictions. But that didn’t stop Mother Irene Gibson and Sister Anne Marie.

In their dubious defense, the holy duo weren’t the only people in attendance. Roughly 70 people congregated in Dublin’s Herbert Park at a time when public meetings were restricted to 15 people.

Father Giacomo Ballini of the Society of St Pius Resistance held a Mass for the crowd at the park.

“No human power can take away the right to say Mass,” he told the attendees during the event, according to The Irish Examiner.

Whether he’s right or not, maybe any religious authority should first ask whether it’s worth exposing your entire congregation to a potentially lethal virus. 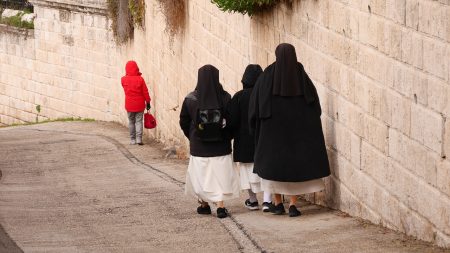 Pack Up and Get Out

After the Mass in Dublin, a video surfaced showing Mother Irene and Sister Anne Marie at the event. The earthly authorities of Ireland became aware of the video, and they didn’t like what they saw one bit.

As a result, the sisters have now been ordered to leave their compound near the village of Leap in West Cork. They have until June to evacuate the premises.

This isn’t the first time the hermit nuns’ compound has drawn the authorities’ ire. In 2019, Mother Irene was convicted of breaching planning regulations at the religious retreat, reported the Irish Central.

Mother Irene had built a two-story oratory and seven wooden sheds in the hopes of developing a religious community at the site. Only, she had neglected to acquire proper building permits.

An Irish court ordered her to remove the illegal structures from the property. In September 2020, only three sheds remained at the place – two for the sisters to live in and one that they use as a kitchen.

Judge James McNulty acknowledged that the nuns had made “significant steps” to comply with the law, even though they still remained at the compound. He extended the deadline for their departure to June 2021.

With their COVID stunt, we doubt there will be enough goodwill left for the judge to give them another extension.

Donations from the Faithful

However, the sisters are facing trouble finding a new location for their compound. They told the court that property prices in the area range from $360,000 to more than a million dollars.

To try and come up with the required money, the nuns have embraced modernity and set up a GoFundMe account. So far, they have received nearly $100,000 in donations.

On their profile, Mother Irene says that thanks to the generosity of their donors, the sisters have been able to “purchase some property.” It’s kind of surprising, considering the inflammatory accusations in the same breath.

“How has this been possible when the children of darkness have done their utmost to try and crush us?” writes Mother Irene.

“By spreading lies on local West Cork newspapers, on social media, and filing complaints about our fundraising campaign to local authorities, they have tried to prevent you, our benefactors, from helping us achieve our goal.

“We must never fear those who are of the darkness and live in the shadow of death. The only power they have is in the space granted to them by an absence of light,” she adds.

So apparently zoning laws are part of some kind of unholy conspiracy? That’s a new one.

A Faction of Rebels

But as Mother Irene says, the Armies of Darkness have many more tools at their disposal. Case in point, they showcased one of them just this month.

The Irish Health Products Regulatory Authority (HPRA) ordered the nuns to remove health claims from an ointment they were selling on eBay. According to them, their black salve ointment could cure “abnormal skin growths.”

The HPRA found the claims to be unfounded and ordered them to be removed from the product descriptions, reported the Irish Examiner. In a similar vein, across the Atlantic the U.S. Food and Drug Administration has issued a warning about the sisters’ salve as it contains bloodroot.

“Using salve products such as black salve for serious conditions like skin cancer can result in delayed cancer diagnosis and cancer progression,” the FDA said.

But the Carmelite Sisters of the Holy Face is on bad terms with more than worldly authorities. They’re in fact not officially affiliated with the Roman Catholic Church.

The order is listed as not being “in communion” with its Mother Church. Not that the fact really seems to bother the sisters, though – they’re not exactly fans of the mainstream Catholic Church.

“We are zealously faithful to the True Catholic Faith according to Holy Tradition prior to Vatican II,” Mother Irene writes on their GoFundMe.

Are the nuns standing up to unjust religious persecution, or are they just hopelessly stubborn? Let us know what you think in the comments.