A woman is sleeping soundly in the dead of night, when she suddenly wakes up. Something wet is dripping on her from above.

Concerned that it might be a plumbing issue, she turns on the light and wipes her face. She looks at her hand and her eyes fly wide with terror – its smeared with fresh blood.

Sound familiar? You’ve probably seen a similar scene play out in any number of horror movies.

Unfortunately for one Texan woman, horror movies decided to literally bleed into reality. Ana Cardenas from El Paso woke up on May 11 with gore dripping into her apartment through the ceiling.

Needless to say, Cardenas was slightly shocked. Considering how common blood pouring from the heavens is in the apocalyptic prophecies of many world religions, she might have thought the end of days was nigh.

Luckily, the world goes on. It wasn’t the apocalypse – just her upstairs neighbor’s vital fluids seeping into her apartment.

Because that clearly makes the situation so much better. 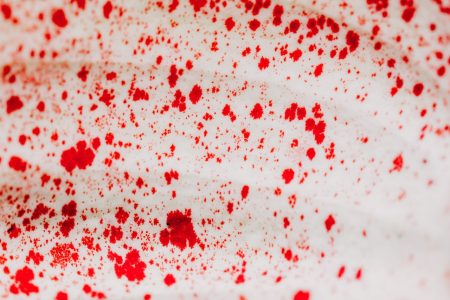 The night before the horror began, Cardenas had gone to bed as usual in her Cielo Vista apartment. It gets pretty hot in Texas, so she had turned her ceiling fan on before hitting the hay.

Around 4 a.m., Cardenas told KTSM, Cardenas woke up. She could clearly hear that something was dripping somewhere.

She thought it was rain, but then she realized that droplets of something were hitting her blanket and face as well. At that point, she got up to see what the noise was all about.

We can only imagine how she felt when she flicked the light switch. Her entire bedroom, along with her face and hair, were splattered with blood.

“It grossed me out. I was in shock. I thought this isn’t real this is a dream, wake up,” Cardenas recalled.

Unfortunately, this wasn’t a nightmare. The blood was flowing in through the ceiling and running down her ceiling fan, which then flung it all across the room.

We’re not sure what we would do if we woke up to gore dripping into our place. What Cardenas did was grab the phone.

She called the maintenance number for her apartment building to report the… Do we call it a “leak?” Understandably, the person on the other end of the call was a skeptical at first.

After informing the management company, Cardenas called 911. They were much more ready to believe her, and both the police and firefighters showed up at her apartment.

The firefighters knocked on the upstairs neighbor’s door, but received no reply. Out of abundance of caution, they decided to break down the door.

Once inside, they found an older man laying down on the floor. He was already long gone.

According to the police, Cardenas’ neighbor had died from natural causes. His corpse had been on the floor for five to six days – long enough for it to begin to decompose.

“The body was laying exactly where my fan is underneath. He had a carpet, but the blood seeped through to my ceiling,” Cardenas said.

She also recalled when the maintenance company took down her ceiling fan. When it came loose, a pool of blood and decomposition fluids flooded down from the cavity between the ceiling and upstairs floor.

The body has now been properly removed, but Cardenas’ nightmare isn’t over. She says that the event has left her too traumatized to eat, sleep, or be at peace in general.

“It was awful, an awful impact,” she summarized.

Not only that, Cardenas had never bought renter’s insurance as her apartment building didn’t require it. As a result, she’s now battling the management company over the damages.

“I told them my bed is covered in blood and they told me they’re sorry but the insurance won’t pay it,” said Cardenas.

She has been staying in a hotel, since her apartment is still uninhabitable. Although the ceiling has been taken out, the stench of death still lingers in the rooms – not to mention the flies.

As a gruesome cherry on top of it all, Cardenas has had to get rid of all her personal belongings that got blood on them. That is due to the potential of blood-transmitted diseases.

Cardenas is also worried that she herself might have caught something. She said she wants a medical exam, but hasn’t been able to get one yet.

To try and cover some of her losses, Cardenas has set up a GoFundMe.

“I have no other means of shelter and now all my belongings have been contaminated,” she writes on the page.

Unsurprisingly, Cardenas decided not to renew her lease at Cielo Vista and is looking for a new place. Wherever she moves, hopefully it won’t turn into a music video for Slayer’s Raining Blood.