Sometimes it just happens that something that almost killed you ends up opening new doors for you. Maybe you get a new job because of it, or wind up meeting a person that becomes your special someone.

Ever have something like that happen to you? Well, Gunner here sure has.

At the end of November, the 4-month-old King Charles’ Spaniel puppy from Estero, Florida, almost got eaten by an alligator. Luckily, his owner’s quick action saved Gunner’s life.

Now, thanks to surviving his brush with the Ol’ Grim Reaper, Gunner has been offered a new job. He will join Florida’s Lee County Sheriff’s Office as a new safety and security officer, with the title of a detective.

“Gunner wins the battle against the alligator, and for that, it’s a happy day. Gunner gets a gold shield,” Lee County Sheriff Carmine Marceno told First Coast News.

In a Facebook post, the Sheriff’s office praised Gunner’s “tenacity and fight for survival”. They added that these qualities made him the “perfect candidate” for his new job.

The fresh Detective Gunner will be enrolled in the Deputy Dogs Pets on Patrol program. His duties include visiting children at schools and other places and teaching them about safety and security.

“Gunner is going to educate all children about safety throughout Lee County,” said Carmine Dellaquila who works with the Deputy Dogs program.

School bus safety, safety as it relates to the water — alligators in the pond, toads, cane toads. Any types of danger that children face every day.” 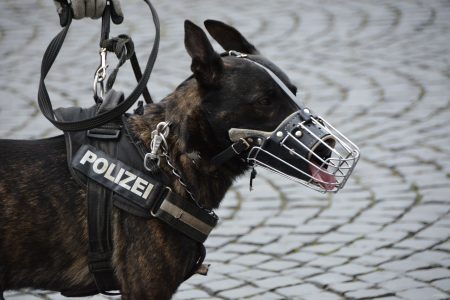 In the Jaws of Death

Gunner’s near-death experience happened on November 21. On that day, he was out on a walk with his owner, 74-year-old retiree Richard Wilbanks and his wife, Louise.

It was a usual sunshine day. Gunner was running around, while Wilbanks watched with a Bloody Mary in his hand and a cigar in his mouth.

Suddenly, Wilbanks heard a yelp. He looked around for Gunner, but couldn’t find him.

Then, he noticed something in the water.

“I looked around and saw the alligator out swimming in the pond with [Gunner],” Wilbanks told First Coast News.

He didn’t waste time. Wilbanks dropped his cocktail and dashed into the pond after the juvenile reptile.

“I just wasn’t going to let him have my puppy for breakfast,” said Wilbanks.

He caught the ‘gator just fine, that wasn’t the hard part. That came when he started prying its jaws open.

If you didn’t pay attention in biology class, alligator jaw muscles are pretty weak when it comes to closing them. But try to open them by force, and you’re going to run into a case of lockjaw.

After some wrangling, though, Wilbanks managed to get Gunner out of the alligator’s mouth. But that’s when it clamped down on his hands.

Still, realizing that it’d lost its meal, the reptile soon let go and swam away. Wilbanks walked back to the shore, with his hands “chewed up” and still puffing on his cigar.

“I didn’t even realize when I came up out of the water that I still had it in my mouth,” he said.

Both Gunner and his owner needed a trip to the hospital, though. Gunner got out of the ordeal with little more than a scare – he had one small puncture wound in his belly from the ‘gator’s teeth, but nothing worse.

Wilbanks, on his part, had his hands patched up and got a tetanus shot, just to be safe.

Alligator attacks aren’t anything strange in Florida. Meredith Budd of the Florida Wildlife Foundation said that in the state, people live in a “shared landscape” with wildlife.

“We don’t just want to tolerate wildlife, but, rather, we want to thrive with wildlife on a shared landscape,” Budd said.

And that includes taking certain safety measures around areas that wild animals frequent. Just the kind of safety precautions that Detective Gunner will help educate children about.

The Wilbanks couple isn’t mad at the alligator. They realize that animals are only doing what they do by nature – even if that sometimes means trying to eat someone’s puppy.

“It gives us a new appreciation,” Louise Wilbanks told People Magazine, talking about the ‘gator attack.

“We do need to be aware they are wild animals. They’re not here for our benefit. We’re very lucky to share this space with them,” she added.

Both of his owners are eager to see Gunner start in his position.

“We’re looking so forward to the program and meeting people and he’s going to be a good representative,” said Mr. Wilbanks.

Gunner is not the only pup working in the Deputy Dogs program. He joins an elite canine education squad, led by one Lieutenant Bosco.

Thanks to the leadership of Lt. Bosco, the rabbit-y menace was apprehended. Roger the Rabbit is currently incarcerated in a cage at the same farmer’s market with his vegetable intake carefully monitored.

Working on that very same case was Deputy Chance. Found abandoned and with his muzzle taped shut, Sheriff Marceno brought Chance onto the police force, where his primary responsibility is spreading awareness of animal abuse.

In the Deputy Dogs program are also Mercy and Maggie, two bloodhounds who assist in tracking suspects and those needing help.

Each and every one of them will surely be happy to have Gunner join the force. And we’re certain that Gunner will make his colleagues proud.