The most inconspicuous animals can get surprisingly violent. Turkeys, for example, can be real terrors.

A couple of years ago, there was a turkey called Gerald that brutalized a park in Oakland, CA, for months. But now have another gobbler that’s giving Gerald a run for his money.

For months now, residents in Washington, D.C, and Maryland have come under regular turkey attacks. But here’s the thing — the authorities believe that the same turkey is behind each attack.

Each victim has described their assailant as a roughly three-and-a-half-foot-tall turkey that suddenly comes screeching at them. While it’s not easy to tell turkeys apart, those who can do so are convinced that there’s only one psycho turkey making rounds.

So why aren’t the authorities doing anything about this raging avian? Oh, but they are — or at least they’re trying to.

But the turkey in question has avoided every attempt to catch it. Several different agencies are after it, but so far, they’ve had no luck in apprehending the turkey. 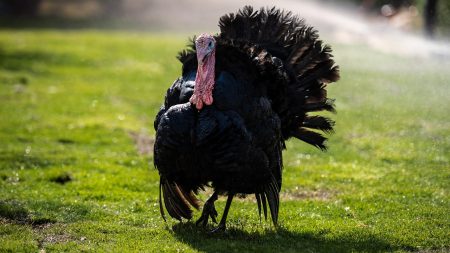 One of the turkey’s victims is Cliff Robinson, a retired court services employee. In early April, he was out walking near a small wood between Kenilworth Marsh and the Anacostia River, on the border between Maryland and Washington, D.C.

And then the turkey came.

“I was attacked there,” Robinson, 70, told Wall Street Journal.

“I was trying to get away from him and he came after me. He wouldn’t let me pass.”

Robinson isn’t by far the only person the turkey has attacked. Many others have shared their stories on social media.

“I was chased by this guy back in November for a solid quarter-mile at relatively high speed,” one bicyclist wrote on a blog, adding that we felt lucky he was on his bike.

“A wild turkey that attacked me on the Anacostia trail last night. I ended up at urgent care with puncture wounds on my legs and I had to get a tetanus shot and antibiotics. It was terrifying,” another person lamented according to WSJ.

The turkey isn’t a previously unknown visitor in the area. In fact, he’s very familiar to local park rangers and wildlife managers.

Sue Greeley is one of them. According to her, the turkey had been living in the U.S. National Arboretum by Anacostia River at least since last November.

Back then, he wasn’t violent at all. In fact, the turkey had a habit of following the park’s workers as they collected dogwood.

“It was this comedic detective-like situation where he was following and then pretended he was not following,” said Sue Greeley, a wildlife manager at the U.S. National Arboretum.

“Near Thanksgiving, the gentleman [the turkey was following] turned and warned him that if he wasn’t careful, he was going to have him for dinner.”

After that remark, the turkey disappeared for a couple of months. But then he reappeared in January near the Kenilworth Aquatic Gardens as a changed bird.

Joe Cashman, a park guide at the Gardens, said that the turkey came after him and another guide as they were biking through the garden.

“We got a kick out of it. Then we started getting complaints,” Cashman recalled.

“It started getting aggressive. It’s gotten more and more aggressive.”

Soon, the guides put up warning posters, encouraging people to avoid wildlife. But since then, the turkey attacks have become increasingly violent.

Clearly, something must be done about the turkey. And believe us, the authorities are trying — there are more than a dozen agencies after the bird.

But the turkey knows how to get away. He keeps zig-zagging between state lines and jurisdictions, flying across the Anacostia to evade the long arm of the law.

It might be easier to do what the one National Arboretum worker joked about and turn the turkey into Thanksgiving dinner. But Cashman says that such an approach is completely off the table.

Instead, the plan is to capture the turkey and relocate him somewhere where he can do no harm to people.

But that’s easier said than done. How can you relocate something you seem to be unable to catch?

Meanwhile, local residents have no idea when or where the turkey will strike next.