Paying attention to traffic is important for staying safe on the road, both for your sake and others’. But as we’re sure you know, some people could stand to be reminded of that fact.

That’s why local authorities often put up traffic safety signs. You know, those big billboards that tell you to slow down, use your seatbelt, how many people died on the road last year, and other stuff like that.

These signs are popular and 28 U.S. states regularly have them up on the roadsides. But they might actually have the exact opposite effect from their intended purpose, a new study found.

Published in the journal Science, discovered that traffic safety notices make drivers more likely to get in a crash. And that’s not just the risk of a crash — there are more traffic accidents in the miles immediately after a traffic safety billboard.

What gives? Why are people crashing their cars immediately after they get told to drive carefully? Let’s find out. 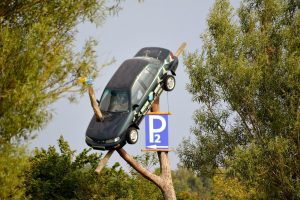 The researchers conducted their study in Texas since the Lone Star State was a perfect location to study the effects of road safety signs. Not because Texas has the most car accidents (although they do), but because the state routinely displays road safety messages once a week every month.

As a result, the scientists knew exactly when and where the safety messages appeared. This allowed them to easily compare the number of accidents with times when the messages weren’t up.

The results weren’t pretty. According to the study, seeing a road safety message makes drivers 4.5% more likely to crash in the next 6 miles or so.

But that doesn’t sound so bad — it’s just a few percentage points, right? Well, let’s put that into perspective.

The researchers crunched their numbers and found that the 4.5% risk increase results in roughly 2,600 crashes every year. Based on the fatality rate of traffic accidents in Texas, those crashes kill 16 people annually.

But like we said, it’s not just Texas that displays traffic safety messages. The researchers also accounted for the other 28 states by applying that 4.5% increase to their accident rates.

As it turns out, traffic safety signs could directly lead to 17,000 car crashes nationwide every year. Consequently, these accidents result in the deaths of 104 people. And without plastic barriers or any type of safety measure, minor traffic accidents could turn into multi-car pileups.

Those are some ugly numbers. But what could lead to this bizarre phenomenon?

That’s what the study’s authors were initially wondering as well. But they soon figured out the likely reasons.

According to their theory, the traffic signs actually end up distracting drivers. When they suddenly see a worrying statistic about traffic accidents, they become preoccupied with the messages.

As a result, the drivers no longer pay attention to the more immediate threats and risks on the road. While they’re pondering how many people got into accidents last year, they don’t pay attention to that slow-moving car that just pulled into their lane.

The researchers also discovered that more gruesome messages are also more likely to distract drivers. It makes sense — you would pay more attention to a bigger fatality number than a small one.

In Texas, the count of annual deaths in traffic restarts in February. The scientists noticed that traffic accidents following a road safety sign decreased sharply after this date.

As the year went on and the bodies piled up, the number on the safety signs went up. And so did the number of crashes in the miles following the sign.

Get Rid of the Billboards

So, traffic safety messages don’t actually increase road safety — they do the exact opposite. Based on this conclusion, the researchers make a rather drastic suggestion.

“Fatality message campaigns increase the number of crashes, so ceasing these campaigns is a low-cost way to improve traffic safety,” they wrote in the study.

Since the safety billboards clearly don’t work, the researchers think we should just get rid of them. Honestly, it’s hard to argue with that conclusion.

But, as these things usually go, there’s a catch. The safety messages do sometimes prevent accidents, but only when the displayed message isn’t too dramatic.

As such, the researchers don’t say that we should completely stop using the safety messages. However, local authorities should carefully consider what kinds of numbers and messages they show so that they don’t accidentally end up killing more people.

But until they figure that out, it might be better to take the billboards down.