Picture this scenario — you’re traveling on a plane when the pilot suddenly loses consciousness. What would you do?

A man on a plane from the Bahamas to Florida faced this situation on May 10. The pilot had a medical emergency and passed out, leaving nobody qualified to pilot the plane onboard.

The passenger promptly grabbed the controls and contacted flight control on the radio. Having an untrained pilot steer the plane could’ve ended in disaster, but the passenger successfully landed at Palm Beach International Airport.

But he’s not the only hero in this story. Everybody on the plane can thank the air traffic controllers who guided the passenger in piloting the plane.

Thanks to all of their heroic efforts, the plane ended up on the runway instead of plunging into the ocean. 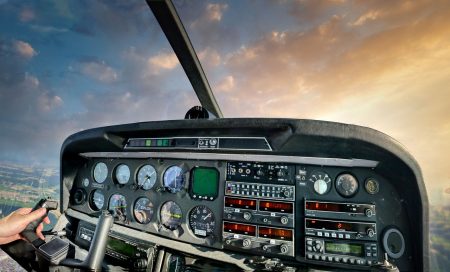 Flight data recorded on FlightAware shows the single-engine Cessna Caravan plane took off from Marsh Harbour in the Bahamas around 11 a.m. on May 10.  According to the original flight plan, it was supposed to land at the Treasure Coast International airport in Fort Pierce, Florida.

Onboard the plane was the pilot and two passengers. At first, things proceeded well — the weather was good and the flight was on time.

But about an hour into the flight, things took a turn for the worst, according to a Federal Aviation Administration blog post. The pilot suddenly told the passengers that he was feeling unwell.

Soon afterward, he passed out. The unconscious pilot slumped down onto the controls — sending the plane into a nosedive.

Neither of the passengers had any flight experience, and their plane was swiftly plummeting to the sea. But one of them decided he wasn’t ready to die yet.

The man grabbed the pilot and pulled his weight off the controls. He then proceeded to grab the controls himself and pulled the plane out of the nosedive.

Fortunately, the plane steadied and stayed airborne. Now there was just one issue — the man, the unconscious pilot, and the other passengers were stranded on a plane that nobody could land.

‘I Have a Serious Situation’

Despite what stubborn DIY fanatics claim, there comes a time when you need to ask a professional for help. And for the passenger piloting the plane, that time was now.

He took the headphones off the pilot and radioed the Fort Pierce Tower at Treasure Coast International. Air controller Christopher “Chip” Flores answered.

“I have a serious situation here. My pilot has gone incoherent, and I have no idea how to fly the airplane,” the passenger told Flores, as recorded on LiveATC.net.

Whatever Flores was expecting to hear, that probably wasn’t it. But he didn’t let that faze him and asked the passenger what the plane’s location was.

When the passenger-pilot told Flores that he had no clue of his location, Flores told him to stay calm, fly straight, and start a very gradual descent. Meanwhile, Flores and his colleagues got to work triangulating the plane’s position.

They soon concluded that the plane was flying over the Atlantic Ocean some 20 miles from the Boca Raton Airport. The easiest way to get the plane down would be to guide it to the Palm Beach International Airport.

Flores told the passenger to change the radio frequency to Palm Beach air traffic control, only to be told that he didn’t know how to. So, Flores connected him to Palm Beach over regular emergency radio.

The Eagle Has Landed

At the Palm Beach air traffic facility, the lead controller put the passenger through to Robert Morgan. On top of being an air traffic controller, Morgan is a certified flight instructor and was familiar with the Cessna plane.

If there was anyone who could guide the passenger to a successful landing, it would be Morgan. But he’s not hogging the glory.

“That guy [Flores] did a lot of the legwork to get him headed the right way. I’m sure other people in the tower were helping too,” Morgan said.

Morgan began giving the passenger short, simple instructions on the basic controls of an airplane. He waited for the passenger to confirm he understood every bit of advice before moving on to the next one.

Meanwhile, the rest of the air control crew was hard at work making sure the amateur pilot wouldn’t collide with another plane. They stopped departures at the airport and told other planes to steer clear.

The passenger himself wanted to land at the closer Boca Raton airfield, but Morgan insisted he proceed to Palm Beach. The airport had a longer runway and less traffic, making it safer for an improvised landing.

Calmly walking him over every part of the landing process, the plane finally safely touched down at Palm Beach. Emergency responders took the actual pilot to a hospital, while neither passenger suffered injuries.

“At the end of the day, I feel like I was just doing my job,” said Morgan.

“But it was like on a higher level than you thought you’d have to do it.”