We all know how easy it is to overspend when online shopping. A click here and a click there, your basket is full, and so is your receipt. But full of salmon?

So, when this woman received a receipt from her recent purchase, she thought she had done just that. Instead of the £81 charge she expected to be on her bill, Karla Tandazo was shocked when her bill was £4,689.98.

She couldn’t imagine what she had bought that would have cost that much. After all, her order was typical. She had bought some bananas, noodles, chewing gum, and potatoes.

It turns out it was a mistake on the supermarkets end. She was way overcharged for the salmon she had ordered. It wasn’t the salmon itself that was such a large charge, but the quantity that was incorrect.

She had been charged for almost 3,000 packs of Wild Alaskan Keta salmon fillets.

Tandazo of Mill Hill East, London, received a notification from American Express just after the order had been processed. The credit card company sited ‘unusual activity’ on her account.

She had been working from home when she made the grocery order and has spotted a three for £10 salmon deal just before ‘checking out’ online. When usually one two-pack of fillets costs £4.99, the deal seemed too good too pass up and she decided to add a package to her basket.

Far more than one of the baskets were added though, and her email showed that in fact, 1,404 packages were ordered in the mix up, meaning she was getting 2,808 of the salmon fillets in total.

Tandazo found the humor in the situation, though. “I was working from home when I made the order. You have to imagine, I wasn’t thinking too hard about this – I saw that salmon deal, and thought it sounded nice, so I put them in the basket. Then I got an email from American Express telling me about unusual recent activity, which is when I discovered I’d been charged thousands of pounds.” 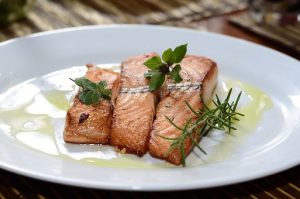 She said, “For a moment, I wondered if I’d been so silly and ordered 1,404 salmon packs. After I could see there must have been some kind of system error, I got in touch with Waitrose, who – to be fair – were very helpful and apologetic. I found the whole thing confusing, but pretty funny – I’ve taken to telling my friends. I’d have refused to have taken 3,000 pieces of salmon in at first, and then given them away at the station or something, or even opened up a little shop.”

The supermarket refunded her with the full amount charged due to the error and has apologized for the “inconvenience.” They even said they would cover her next shop. What great customer service!