As anyone who’s ever gotten punched will testify, it’s not fun. Getting served a heaping serving of knuckle sandwich just plain hurts.

But imagine if you got pummeled by an assailant with eight arms. It sounds like a nightmare, but now you know what certain tropical fish have to live with.

New research has found that certain fish species, like groupers or goatfish, sometimes form underwater hunting packs with octopuses. The unlikely alliance is supposed to benefit everyone involved.

“Interspecific interactions can be mutualistically beneficial,” note the researchers in their paper, published in the journal Ecology.

The hunting pack consists of an octopus and fish, who are all after different prey. The octopus will crawl around rocks and crevices, goatfish scour the sea floor for edible tidbits, while other fish circle above them to catch anything that manages to get away.

On paper, it sounds like a pretty efficient arrangement, at least on the predators’ part. Everyone gets something to eat, and they don’t have to compete with each other.

That’s what it would be, but as is usual, there’s always that one rotten apple who ruins it. It turns out that octopuses seem to get a kick out of punching the fish around them.

And sometimes their only motivation seems to be that they just really want to act like total douchebags. 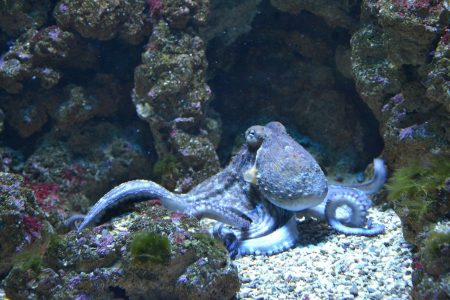 It’s Funny When Someone Else Gets Hit

Eduardo Sampaio is the study’s lead author and a PhD student at the University of Lisbon and the Max Planck Institute of Animal Behavior. He spends his time observing marine animals and studying their interactions.

Between 2018 and 2019, he observed the aforementioned hunting pack behavior on several occasions while diving in Eilat, Israel, and El Quseir, Egypt. On eight of those occasions, he also saw an octopus smash a tentacle-y fist straight into a fellow sea creature’s face.

Sampaio tells LiveScience that the first time he saw it, he nearly drowned himself laughing.

“I laughed out loud, and almost choked on my own regulator,” Sampaio recalled.

The hilarity of it all kind of faded as he watched octopuses pummel more fish, but Sampaio still said he “marveled” at it every time he saw it.

As a result of the punch’ force, the assaulted fish would get pushed to the edge of the circling hunting pack. Sometimes they would return after a while, but other times they decided they clearly weren’t wanted and buzzed off.

“The octopus would leave the fish alone after displacing it,” noted Sampaio.

Out of the Way, Nerd

But why are the octopuses treating the fish like punching bags? Sampaio explained that sometimes an octopus would lash out if it felt it was being attacked or a fish was going after a morsel it had set its eyes on.

Indeed, while the hunting pack supposedly benefits everyone in it, it’s not like the sea creatures are looking out for each other. It’s a fish-eat-fish world down in the depths, where everybody ultimately only cares about themselves.

“Despite collaborating, each partner [in the hunting pack] will always try to maximize its benefits,” said Sampaio. “In the cases where prey is readily available, the octopus seems to use punching as a way to control the partner’s behavior in a self-serving way.”

In other words, the octopus is telling the fish: “Piss off, that piece of food is mine.” Pretty rude, but that’s just how it is.

If the octopus has to pick between punching a fish and eating, or being nice and going hungry, it’s easy to see which it would pick. We don’t need to condone octopus-on-fish violence, but we can try to understand it.

But then there were those times when an octopus decided to bludgeon a fish for seemingly no reason at all. So what could’ve instigated the violence in these cases?

Sampaio has no solid answers. The marine biologist put forward a couple of educated guesses, though.

One theory is that it’s more energy-efficient for the octopus to sock the fish in the face instead collaborating peacefully. Or, to put it more simply, the octopus is being lazy.

If punching a fish requires less effort than trying to go around it in search of food, the octopus can – and most likely will – throw a punch.

What does the octopus care if the fish gets hurt? What’s it going to do, punch back with its puny little fins?

The second theory Sampaio has is that the fish punching is a form of negative reinforcement. By slapping a fish, the octopus could be punishing it for swimming out line in the hopes that it’ll behave better during a future mutual hunt.

You know, neither of these options really help the octopuses’ case. They still come off as jerks.

Sampaio emphasizes, though, that he – or anyone else in the science community – has no solid explanations for the behavior. To get those answers, he will have to see plenty more fish get smacked.

“We want to understand how the prior interactions between the two animals, in the context of the whole group, can lead to a fish getting punched – and also what changes after that event,” explained Sampaio.

“We suspect that the main reason is related to prey opportunities, of course, because that is also the reason why these groups naturally form in the first place, given the complementary hunting strategies of the partners,” he concluded.

Or perhaps – hear us out, now – based on all the examples we’ve been given, there’s a simpler answer. Maybe octopuses are just a bunch of ***holes.