It’s fantastic for both mom and baby when breastfeeding works out. Some people think that there should be an age constraint, while others like Wynne, don’t really see it that way.

“It’s never felt right to end it unnecessarily. It’s what they’re asking for and it’s biologically normal even if it’s not in society.” She does say that, “I think about when I’ll stop all of the time.”

“We started the conversation when Riley was three when they would stop having mommy milk and Riley said when he’s ten and I told him there’s no chance.”

“The choice isn’t just mine, it’s a relationship because it’s something we do together.”

“It’s not like I don’t have a choice, a lot of the time they ask for it and I’ll tell them to get off.”

“I do wonder if they’d just stay on there all night.”

“It’s made us closer. It’s the fact they know they can come to me and be comforted any time.” 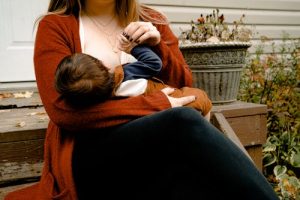 “We can do that without breastfeeding, a lot of people who aren’t breastfeeding will still respond to that but it’s part of my toolbox.”

“It’s formed part of our relationship and that’s my main drive for continuing breastfeeding.”

Family and friends alike dish out nasty, negative comments about the boys breastfeeding at their age and beyond. For Wynne, it’s a way to connect with her sons’ she even comforts them at the playground this way.

For her, she wants to wait until they’re ready, no matter how others see it.

“Riley and Mylo pick up on people’s opinions. My eldest wouldn’t ask for it when we’re out because he knows other people will see but he will behind closed doors but my youngest is confident.”

People and their opinions, am I right? Read Mom Will Nurse Sons, 5 and 6, ‘Until They’re Ready’: Part Two here, to get the rest of the story.