At the Florida pediatrician’s office, there was a sign that read, “Please do not touch medical supplies.” But that didn’t stop this mom from letting her daughter remove a tongue depressor from its jar, lick it, and put it back. This was a felony, just so you know.

Cori E. Ward filmed the action and posted it to social media on July 9th, along with the caption, “Don’t tell me how to live my life.” And now she’s in trouble with a felony to prove it.

Ward was arrested two days later at All About Kids & Families in Jacksonville, Florida. The incident led her to be charged with a felony for “tampering with a consumer product without regard for possible death or bodily injury.”

Bond was set to $2,500, and she was told that “she cannot have contact with the doctor’s office or any social media.” She was released on Friday.

According to Ward, she had posted the video on Snapchat to just her personal list of about 20 friends. The video went viral, when someone else publicly posted it to Facebook. 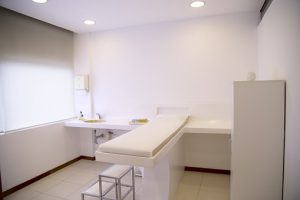 Ward says she has received death threats, but she says she removed the items from the jar that her daughter touched. After the medical center heard about the incident, they contacted the authorities. All About Kids & Families said, “We were notified yesterday that a patient had violated our trust with behavior that is inconsistent with the practices and standards that we uphold and expect in our facility.” The center also confirmed it “removed all materials and containers from the specific exam room and re-sanitized“ the entire place.

After seeing the video, viewers accused Ward of creating it as a part of the media’s new “licking challenge” or the “ice cream challenge,” but she claims she had no knowledge of the challenge.

Sometimes when a sign says you shouldn’t do something, you shouldn’t. And posting it on  social media is just asking to get caught, duh.