A New Zealand couple has unwittingly grown a winner in their garden. The green-thumbed gardeners may have unearthed what could be the world’s biggest potato.

Colin and Donna Craig-Brown, from Waikato in northern New Zealand, discovered Dough in late August. At the time, the couple was cleaning up their vegetable garden, which had gotten a bit out of hand.

“It’s fair to say our veggie garden can sometimes get a bit feral. There are some parts of the garden you need to pack a lunch and advise your next of kin before heading in to,” Colin told Stuff.

Colin was using a hoe to dig up some large, stubborn clumps of weeds when his hoe struck something. Beneath the soil was an unknown, solid object.

“So I said to Donna this must be one of those white kumara that we grew, because some of them just grow massive here,” he recalled.

The kumara, also known as kogenesengan, is a Japanese sweet potato variety. So, Colin’s guess was partially right.

But a kumara it was not. 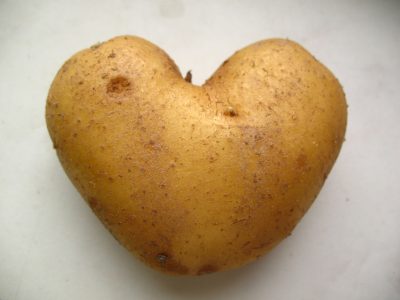 ‘Where Did That Come From?’

Colin started digging around the hidden tuber with a garden fork until he’d revealed most of it. But he really couldn’t tell what the lumpy, ginormous mass actually was.

So, he did the only reasonable thing you could imagine. He stuck his garden fork in to the tuber and licked it as a taste test.

Just so we’re clear, that’s not the reasonable thing to do. Unless you really want some kind of parasitic infection, don’t eat unwashed veggies straight from the ground.

Anyway, the taste test surprised Colin. This was no kumara at all, but a good old-fashioned spud.

“I said to Donna: ‘What the heck!’ Where did that come from?” Colin said.

Indeed, the origin of the potato is a mystery. Neither Colin nor Donna remember intentionally planting potatoes in their garden.

There weren’t any potato stems or leaves above ground, either. That doesn’t necessarily mean anything, though — Colin admits he had been pulling plants up and carrying them away without much thought.

Colin and Donna dug Doug out of the ground and marveled at his glory. Then they realized that they should probably do something with the potato.

“I mean, we could definitely have eaten it. It’s not watery or anything,” Colin mused.

But the couple figured that there would be a better use for the spud than making a massive amount of mashed potatoes. They thought they just might have a new world record holder in their hands.

And that’s just what they have, at least according to Guinness World Records. The current heavyweight champion of potatoes weighs a measly 10 pounds and 14 ounces.

That’s nothing compared to Doug.

To begin with, the couple had to read the 128-page instruction document on how to apply for the record. Then, they had to get a picture of the potato sitting on a certified scale.

Finally, they sent out the record application form… Only to be told that the earliest they could expect to hear back from Guinness was in three months.

Oh well, good things come to those who wait.

To Preserve a Giant

While they waited, the couple had time to have a bit of fun with Doug. Colin built a small cart for the potato and dragged him along around the town.

“We put a hat on him. We put him on Facebook, taking him for a walk, giving him some sunshine,” Colin told Associated Press.

But unfortunately, time makes fools of us all — even Doug. As the weeks have gone on, he’s started to let himself go.

The potato has begun to dry out and has even lost some weight. While it’s otherwise in good condition, there’s some mold growing where Dough stabbed the spud.

“He was getting a bit pongy,” Colin added, commenting on the potato’s smell.

To preserve him in his near-mint glory, the Craig-Browns have now wrapped Doug in several layers of plastic film. For the time being, he rests in the couple’s freezer.

Colin and Donna aren’t sure what to do with the potato once Guinness confirms the world record. But Colin is an enthusiastic amateur brewer, so he’s considering making Doug into a batch of potato vodka.