It can take a long time to get the justice you deserve. We’d say 329 years is way too long, though.

But that’s the time it took for Elizabeth Johnson, Jr., to get her name cleared of crimes she didn’t commit. Johnson was the last of the Salem “witches” who hadn’t been exonerated for making pacts with the forces of darkness.

Now, she’s finally been pardoned. Lawmakers in Massachusetts formally exonerated Johnson on May 26.

“We will never be able to change what happened to victims like Elizabeth but at the very least can set the record straight,” Massachusetts Senator Diana DiZoglio told NPR.

In total, 36 people were found guilty of witchcraft and devil worship during the Salem Witch Trials between 1692 and 1693. Out of the lot, 25 were either executed or died during imprisonment. Additionally, more than 200 people were accused of being in league with Satan.

All of them had received posthumous exonerations, though — all except Johnson. At least she’s now officially innocent, for what it’s worth. 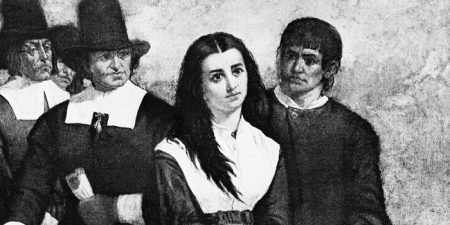 A Victim of Circumstance

But who was Elizabeth Johnson? And what caused the people of Salem of accusing her of witchcraft?

Johnson, as far as we could find out, was born in either 1670 or 1671. She was 22 years old when accusations of witchcraft landed her in the courtroom.

What was it about Johnson that made people with she was a witch, though? The reason most likely lies in the fact that, according to testimonies, Johnson was mentally disabled.

Courthouse News Service reported that during Johnson’s trial, her grandfather described her as “simplish at the best.” A defender of the accused witches, Boston merchant Robert Calef, called Johnson and another defendant, Mary Post, “the two most senseless and ignorant creatures that can be found.”

The language Johnson’s grandfather and Calef used is insensitive by today’s standards, but Johnson clearly had some intellectual problems. They may have contributed to her confessing to devil worship and witchcraft.

In 1693, the witch courts found Johnson guilty and sentenced her to death by hanging.

Fortunately for Johnson, the sentence was never carried out. By the time she was convicted, the witch trials had started dying down as people realized that maybe they were slaughtering innocent women over nothing.

As such, then-Governor of Massachusetts William Phips threw out Johnson’s death sentence. Johnson is believed to have died of natural causes in 1774 and was buried in an unmarked grave.

Justice at Last — Thanks to Kids

In the centuries following the witch trials, all but one of the accused — including Johnson’s mother — received an official exoneration, striking their “crimes” off the record. But Johnson never received the justice she deserved.

We may never know why. DiZoglie suggests that Johnson’s mental difficulties and the fact that she never married led to people thinking she wasn’t important enough for a pardon.

However, an unexpected party picked up Johnson’s case in 2019. Carrie LaPierre, an eighth-grade civics teacher, was teaching her class about the Salem Witch Trials and Johnson’s name came up.

That gave LaPierre an idea. Her students could contact Massachusetts lawmakers and lobby for Johnson to finally receive an exoneration.

LaPierre’s kids weren’t initially that excited about trying to clear the name of a woman 300 years dead. But when local media started reporting on their class’ efforts, their interest increased exponentially.

Finally, LaPierre and the students caught DiZoglio’s ear. Some legal wrangling later, the question of Johnson’s exoneration ended up in front of the state lawmakers.

She still wasn’t important to get her own bill, though. Her pardon was part of a budget bill whose passage probably had nothing to do with Johnson.

But at least she’s officially no longer a convicted witch. LaPierre also thinks that getting Johnson’s name cleared was an important lesson for her students.

“Passing this legislation will be incredibly impactful on [the students’] understanding of how important it is to stand up for people who cannot advocate for themselves and how strong of a voice they actually have,” she said.

Although Johnson’s death sentence falls under the Salem Witch Trials in the public eye, she wasn’t actually from Salem. In fact, Salem wasn’t even the hotbed of the witch hysteria.

Out of the 156 people accused of being witches in Essex County, Massachusetts, only 12 were actually from Salem. The supposed witches were from all over the surrounding towns, but the largest number of trials took place in Andover, 15 miles northwest of Salem.

In Andover, the authorities accused 45 people of witchery. One of them was Johnson, who lived in the town.

Salem has become synonymous with the witch hunts for a couple of reasons. As the county seat, Salem was where the trials and executions took place.

Additionally, Salem has happily embraced the injustice of its past because it’s good for business. The witch trials draw plenty of tourists to the town.

Andover, on the other hand, has tried to sweep its witch-hunting days under the rug as much as possible. Unfortunately for Johnson, she apparently got caught by the broom as well.

“Elizabeth’s story and struggle continue to greatly resonate today. While we’ve come a long way since the horrors of the witch trials, women today still all too often find their rights challenged and concerns dismissed,” said DiZoglio.