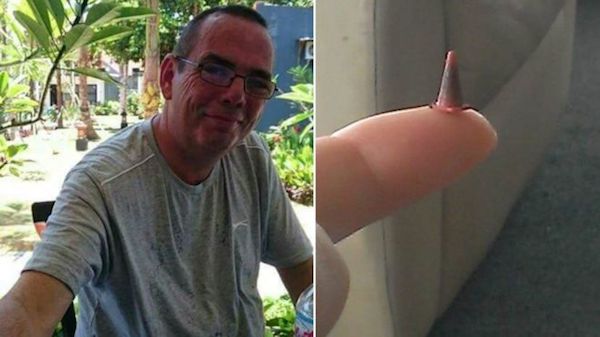 Oh, what a lucky man he was—or rather, is.

Paul Baxter, 50, of Preston, Lancashire, visited a doctor after coughing up yellow mucus for over a year. He was a smoker for some 30 years, and after a round of tests, doctors feared the worst. A scan performed to determine the cause of his symptoms showed that he had a shadow on his lung—the handyman was suspected to have cancer, and his prognosis looked grim.

He was sent to a specialist for a bronchoscopy, and that’s where medics identified “something small and orange” at the bottom of his lung. The test finally revealed that the mass was not a deadly tumor, but a traffic cone from a Playmobil set that had been lodged inside him.

Baxter remembered that he had received a Playmobil set on his seventh birthday and said, “I did what every kid does. I used to eat my toys. I must have had it in my mouth, and it went down my windpipe. But I don’t remember feeling anything.” He recognized the cone from a model railway set he had at that time.

When a doctor put a camera down his throat, Baxter recalls: “He said he could see something orange at the bottom of my lung…I couldn’t think what small and orange thing could be in there. [When they pulled it out] everyone just started laughing, the doctors, nurses, all of us.” Medical staff was said to be “stunned” by how the cone remained undetected and believe his is the first reported case of a “tracheobronchial foreign body” overlooked for four decades. Due to his young age when he inhaled the toy, doctors reasoned that his lungs had developed around the cone.

“He finally found his long-lost Playmobil traffic cone in the very last place he would look,” medics wrote in BMJ Case Reports.

Unsurprisingly, Baxter kept the toy. “I find it absolutely hilarious,” he said. No, it is not on the mantelpiece. It is in a jar they gave me, in the cupboard. I think I will keep it forever, pass it on to my grandchildren.”