We’ve all heard of people who get arrested for crazy reasons, but have you ever known someone to get arrested because they ran into a cop, with a lawn mower? Yup. That’s this story. 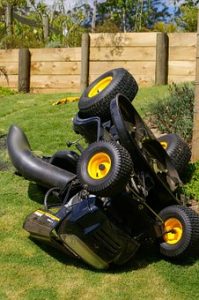 The man known as Anderson was under the influence and crashed into the vehicle while the officer was away from the car. And of course it happened in none other than Florida.

After hearing the crash, the officer walked back to his car and saw a man on the lawn mower with a trailer. There was minor damage to the rear plastic piece on the vehicle.

Anderson admits to hitting the cruiser but insists that there is no damage. According to the officer, Anderson told them that he was drunk.

He was unable to complete a sobriety test when asked and according to the police his demeanor “ranged from laughing to aggressive.” Anderson was taken into custody where he accused the police of poisoning him and said he needed to be taken to the hospital.

His blood alcohol level came back as .241 which is more than three times the legal limit. He also tested positive for cocaine.

According to Anderson, it was the police who put the cocaine into his system and he argues his point with profane language and racial slurs.

He was charged with a DUI and refusing to submit to a DUI test after a license suspension.He also had two prior convictions and his license has been suspended since 1978 according to records.

“I’m proud of the professional demeanor our officers showed when dealing with this heavily intoxicated, belligerent offender,” Police Chief Elensky told reporters. “It’s never a good idea to get behind the wheel drunk, even if that wheel is to a Craftsman, Massey Ferguson or John Deere.”

Anderson is still in Polk County jails and has a $3000 bail.