This lucky cat survived the washing machine, while it was running. The owner accidentally locked the animal in the machine.

Optimus Jack had crept into the washing machine while owner, Janae Blackman, 22, had her back turned. Oblivious to the fact that Optimus Jack has jumped in, she finished loading the machine and hit the setting for a 30-minute spin.

When Blackman heard a thud in the washer, she quickly stopped the machine and rescued her kitty. She couldn’t believe it.

“I loaded the washer in the bathroom, then went to the kitchen but I heard a thud in the washer so I looked inside and he was in there scrambling around. I panicked and just thought ‘oh my God, is this really happening?’”

“I’m just thankful we can stop the washing machine because not everyone’s washing machine does that but when I stop mine the water drains out. “He’d only been in there for about a minute but it could have been a lot worse. I got him out, examined him and dried him off.” 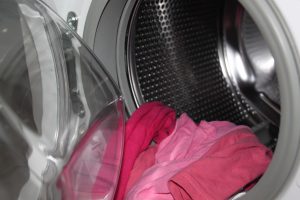 “I just couldn’t believe it had really happened. I find comfort in laughing when things like this happen and he looked quite funny.”

Optimus Jack is only nine-months-old but he learned his lesson and hasn’t napped in the washing machine since. Blackman is a disability mentor and business management student from New York, and said: “I’d had a busy day at work and was catching up on some laundry.”

That was how it all started. “He hasn’t been in the washing machine since.”

“He stares at it when a load is in and it looks like he’s thinking how evil it is. He’s definitely learned his lesson.”

That was one lucky cat and one happy cat mama.