Oh wearing a contact, and what it can do. If you wear contacts, you know what a pain they can be sometimes. Not only do they bother your eyes, but they can be dry, broken, or even get stuck or “lost” in your eye. And when that happens, yike. Not fun.

They also provide glasses-free, clear sight, which is nice if you don’t like to wear glasses. It’s also nice if you want to wear sunglasses.

The thing is, when wearing contacts and things go bad, they can go really bad. At least that’s what happened to a 42-year-old Great Britian woman who had a contact lens get stuck in her eye.

The contact was lost as a teen and the woman thought it had fallen out and got lost. It wasn’t until 28 years later that she found out the contact had not been lost. In fact, that was when she found the contact.

She had a pea-sized lump below her left eyebrow and went to the doctor to check it out. A cyst had formed and was visible on a MRI. It was causing the woman’s left eyebrow to droop.

When doctors went in to remove the cyst, they realized what else was in there. An old and rigid contact that had gotten stuck, lost, and forgotten for almost 30 years. 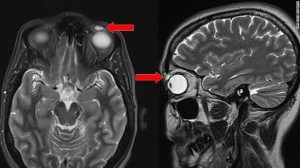 At first, the woman could not recall when or where the contact had gotten stuck or lost, as it were. It was her mom that remembered the girl had lost a contact during a Badmitten game when she was just 14.

She had no symptoms and nothing bothering her, so she assumed the contact had fallen out at some point. “The patient never wore [rigid gas-permeable] lenses following this incident. We can infer that the RGP lens migrated into the patient’s left upper eyelid at the time of trauma and had been in situ for the last 28 years,” the report read.

After the cyst and the lens were removed, her eyes went back to normal and the left eyelid no longer drooped. It’s a good thing she got it out and no more damage was caused.