Capital punishment is a divisive topic. But in a recent spate of assaults in Japan, the authorities felt the death penalty was warranted.

The criminal wasn’t a person, mind you. Instead, it was the potential leader of a rampaging pack of macaques.

The monkeys have terrorized the city of Yamaguchi for more than a month. They’ve carried out dozens of attacks and injured equally many people.

Eventually, the local government decided that enough is enough. They put together a special team of hunters who received a simple mission — to find and eliminate a marauding monkey.

The 4-year-old male macaque had been implicated in at least one monkey attack. So, the hunters did what they do best and hunted down the monkey.

With a bang and a whimper, the macaque’s life came to an end. But will that really help Yamaguchi? 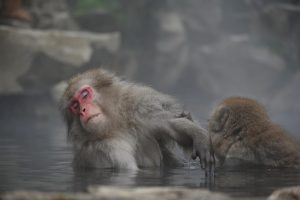 ‘A Monkey Hunching Over My Child’

According to reports, the macaque attacks began on July 8. For reasons unknown, the macaques started assaulting people out on the streets.

“Initially, only children and women were attacked. Recently, elderly people and adult men have been targeted too,” a city official told The Guardian.

The attacks have also moved away from the streets. Some residents have reported that the monkeys are entering their homes, either through windows or by opening sliding screen doors.

In one instance, the monkeys threatened and scratched a 4-year-old girl. In another case, they burst into a kindergarten classroom.

“I heard crying coming from the ground floor, so I hurried down. Then I saw a monkey hunching over my child,” one father recalled according to BBC.

Due to the attacks, the locals have begun arming themselves. Media reports say they’re now carrying umbrellas and garden shears to chase away attacking monkeys.

Authorities, too, tried non-lethal methods before resorting to the macaque execution. Yamaguchi’s police officers started carrying tranquilizer guns at the end of July.

But why are the monkeys attacking?

Seeing macaques around Yamaguchi is nothing unusual. But they aren’t usually violent animals.

“All of Yamaguchi city is surrounded by mountains and it’s not rare to see monkeys. But it’s rare to see this many attacks in a short period of time,” the city official said.

Ironically, the reason for the monkey aggression may lie in human efforts to save them. Around the beginning of the 21st century, the macaques had gone nearly extinct due to hunting and habitat loss.

After WWII, the Japanese government banned macaque hunting. As it turns out, that may have been a slight mistake.

Sure, the monkey population grew again. But it grew a bit too much.

In addition to the monkeys themselves, their main predators — the mountain hawk-eagle and the Japanese wolf — are extinct. With no one threatening the macaques, their numbers quickly grew out of hand.

Now, the monkeys are in constant battle with Japan’s farmers. The roaming bands of macaques are ravaging their crops in their endless search for food.

Another reason for the multitude of monkeys lies in Japan’s demographics. With more and more people moving to cities, the country’s rural areas are quickly becoming empty.

With fewer people around, there’s no one to bother the monkeys. As such, they’re becoming less and less afraid of humans and have begun to attack.

Although the officials have now killed the “leader” monkey, it doesn’t seem to have done any good. According to reports, the macaques are still going nuts.

“Eyewitnesses describe monkeys of different sizes, and even after the capture, we’ve been getting reports of new attacks,” an official said according to Insider.

The locals and authorities are at a loss about what to do. The monkeys are unlikely to leave on their own, but massacring them all would most likely violate laws protecting the monkeys.

For the time being, the local government encourages residents to keep their doors and windows locked tight and to avoid the monkeys. But how long can they put up with it?