Today, The Wizard of Oz and A Star Is Born are considered Hollywood classics, but each film faced the editor's shears and were almost butchered.

“Over the Rainbow” was almost cut from The Wizard of Oz during test screenings and final editing in the summer of 1939. According to reports, MGM studio head Louis B. Mayer thought the song was too sad. It is also said that a half a dozen studio heads wanted the song cut. Producer Mervyn LeRoy and assistant producer Arthur Freed argued passionately for the song's inclusion and saved it from the cutting room floor.

Unfortunately, A Star Is Born, Judy Garland's 1954 “comeback” movie, didn't fare as well. The original release was 181 minutes long, but theater owners complained about the length and wanted a shorter film so they could have more showings per day, hence more money from the box office. Warner Bros cut out 27 minutes. The excised footage was then carelessly handled and lost. After an extensive search, about 20 minutes of the film and the original soundtrack were found and re-added and a new cut of the film was released in 1983. Where film footage could not be restored, production stills were inserted. The missing seven minutes of footage has never been found.

The Rolling Stones commenced the second phase of their career with a long run of classic albums, beginning with 1968's Beggar's Banquet. For decades, the album cover art was just a plain white sleeve meant to look like a formal invitation. The original artwork was an image of a graffiti-covered bathroom taken at a Porsche repair shop in Los Angeles by Barry Feinstein. The graffiti was deemed a little too risqué for the band's record label, and they delayed the album's release for several months.

In 2002, when Beggar's Banquet was finally reissued on CD and LP, not only did the reissue contain the infamous graffiti cover, the songs were restored to their proper, slightly faster speed. Due to a mastering error, the legendary album was heard for over thirty years at a slower speed than it was recorded.

3The shocking horror classic that had four scenes deleted

Frankenstein, one of the all-time great horror films, had four scenes cut and later restored.

Almost everyone remembers the scene in which Dr. Frankenstein resurrects the monster and exclaims, “It's alive!” The doctor's lines after that, however, were censored but have recently been restored. In the restored scene, Dr. Frankenstein can clearly be heard saying, "Now I know what it feels like to be God!" as the Monster shows signs of life.

In another censored scene, once Dr. Frankenstein realizes that his creation is a menace, he tries to stop him by hitting him over the head with a cane. After that fails to stop the Monster, the doctor injects him using a hypodermic needle.

In deleted scene number three, the doctor's lab assistant, the hunchbacked Fritz, is shown tormenting the Monster with a burning torch. After escaping from his chains, the Monster gets his revenge by hanging Fritz.

The most famous deleted scene, however, shows the Monster coming upon a little girl, Maria, who is throwing flowers into a pond. He joins her in the activity but soon runs out of flowers and ends up tragically throwing her into the water. When the film was re-released in 1937, the scene was cut out of every print.

Spartacus, from director Stanley Kubrick, is the legendary tale of a bold gladiator (Kirk Douglas) who led a triumphant Roman slave revolt. It won four Oscars and helped usher in a new era of filmmaking in Hollywood. However, it also came with its share of controversy.

In the original version, Spartacus included a scene in which Marcus Licinius Crassus (Laurence Olivier) attempts to seduce Antoninus (Tony Curtis). The Production Code Administration and the Legion of Decency both objected. Censor Geoffrey Shurlock suggested it would help if references to oysters or snails (aphrodisiacs) were changed to truffles and artichokes. In the end, the scene was cut, but it was put back during a 1991 restoration. Unfortunately, the sound to the clip had been lost, and the dialogue had to be dubbed. Curtis was able to redo his lines, but Olivier had already died. Joan Plowright, his widow, remembered that Anthony Hopkins had done a dead-on impression of Olivier, and she mentioned this to the restoration team. They approached Hopkins, and he agreed to dub Olivier's lines. Hopkins is thanked in the credits for the restored version.

5The censored gay sex scenes restored as the author intended

From Here To Eternity contains one of Hollywood's most iconic love scenes — Burt Lancaster and Deborah Kerr kissing each other on a beach with waves crashing down on them. But the original text of James Jones' 1951 novel has revealed that the author intended to include references to homosexuality considered too scandalous to be published at the time.

Two scenes were cut from the original text. In one, private Angelo Maggio — the soldier played by Frank Sinatra in the 1953 film — confesses to having oral sex with a wealthy man for $5 or $10. He says that the money "comes in handy the middle of the month." In the second scene, a military investigation into gay activity is talked about.

The scenes were eventually restored 60 years after the original publication of the book. Sarah Churchwell, senior lecturer in American literature and culture at the University of East Anglia, welcomed the changes. She said that Jones was offering a more realistic depiction of what soldiers during World War II were doing, adding that “…one of the things men were doing was giving blow jobs for money."

With the massive success of Star Wars: The Force Awakens, perhaps now is the time that the original, spectacular-looking, unaltered version of the 1977 film and the following two sequels can finally see the light of day — but don't count on it.

Dissatisfied with the initial theatrical versions of Star Wars Episode IV: A New Hope (1977) and its sequels, The Empire Strikes Back (1980), and Return of the Jedi (1983), series creator George Lucas altered the films several times, (arguably) improving their visual effects and sound quality. In 1997, Lucas again restored the trilogy but added new computer-generated sequences. For example, in the original version of the film, you can see Han Solo pulling out his gun and shooting the bounty hunter Greedo. In the 1997 version, Greedo shoots first. In the 2004 re-release, they shoot at the same time. Lucas took it even further when he edited fan-despised characters Jar Jar Binks and Anakin Skywalker into the modified films.

Enough was enough for superfan Harmy — a 25-year-old from the Czech Republic — who used his computer skills to restore the original trilogy. Harmy and other Star Wars fans painstakingly reassembled the movies from a handful of different versions and formats — including VHS to DVD to 35mm print scans — using photography and animation software.

Curators at the National Film Registry picked the 1977 version of Star Wars for historic preservation, but they still don't have a copy in the registry.

7The recalled album cover that predicted a band's fate

When Southern rock band Lynyrd Skynyrd released their fifth studio album on October 17th, 1977, they were prepped to keep building on their popularity with hits like “Sweet Home Alabama.” The album was called Street Survivors and the cover showed the band engulfed in flames. Three days later, their airplane crashed in Mississippi, killing three members, including leader Ronnie Van Zant, and the cover took on a whole meaning.

The album, which hit number five on the charts, was pulled from the shelves and replaced with a similar shot of the band from the same photo session but, this time, standing in front of a stark, black background. Street Survivors has since been reissued with the flame artwork restored.

Legendary filmmaker Cecile B. DeMille's 1932 Depression-era film, The Sign of the Cross is one of the movies that birthed the Hays Code and the Production Code Administration.

Renaissance artist Bronzino's double-sided Portrait of Dwarf Morgante (1553), shows a dwarf naked and hunting in all of his frontal and rear glory. In the 1700s, the work came to be considered indecent, so grape leaves and vines were added to cover him.

In 2010, the painting was finally restored to its original state. Here's to the 300 plus year-old grape leaves that are finally disappearing, much to the relief of Morgante!

10The photo censored by Instagram due to pubic hair 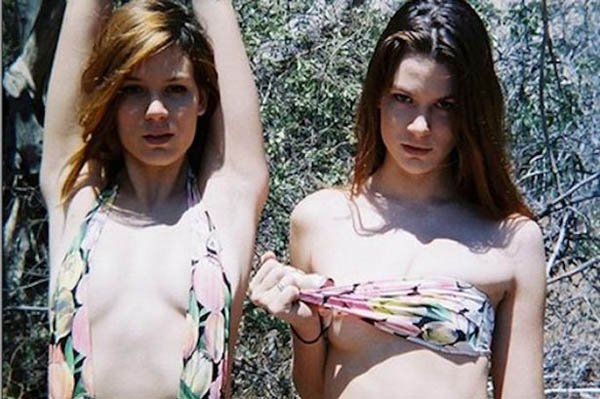 In early 2015, Australian agency Sticks and Stones uploaded a picture of two women in bathing suits to Instagram. In the photo their pubic hair peeking out was peaking out from their bikini bottoms. The social media site has user guidelines that ban "violent, nude, partially nude, discriminatory, unlawful, infringing, hateful, pornographic or sexually suggestive photos" and disabled the account.

Was this a double standard? Sticks and Stones Director Ainsley Hutchence, mic.com, Cosmopolitan and an army of angry Instagram users thought so and aired their complaints. Jessica Lewis, a model and body image expert in New York City was appalled by Instagram's decision and said, "Why is it inappropriate for women to show natural, REAL pubic hair in images when we have Justin Bieber having his Photoshopped in for his most current Calvin Klein campaign with Lara Stone? If a male can be enhanced in post to look more masculine by way of pubic hair, why can't a woman feel accepted in society to be feminine in showing hers?"

Instagram apologized and released a statement saying, "We recognize that we don't always get it right. In this case, we made a mistake and have since restored the account."