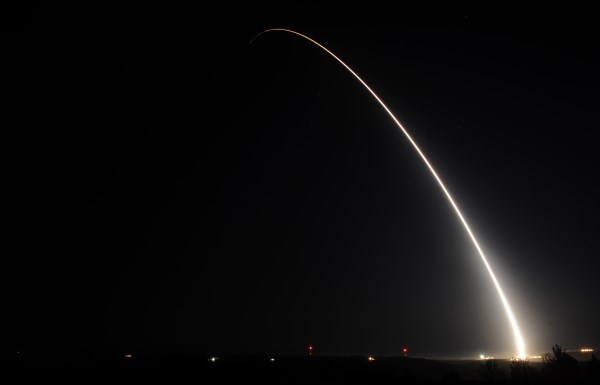 The lack of information about a streak of light that was visible across the states of California, Nevada and Arizona led to a flurry of calls to law enforcement agencies and lit up social media as people posted photos and videos of the celestial sight. Many had thought—or had hoped—the light was a sighting of an unidentified flying object, or UFO.

No such luck. The U.S. Navy fired an unarmed Trident missile from a submarine off the coast of southern California from the USS Kentucky, a ballistic missile submarine. Commander Ryan Perry said such launches were conducted on a frequent basis to ensure the continued reliability of the system and that information about them is classified before the launch.

The test was conducted in the Pacific Test Range, a vast area northwest of Los Angeles, where the Navy periodically test-fires Tomahawk and Standard cruise missiles from surface ships and submarines. 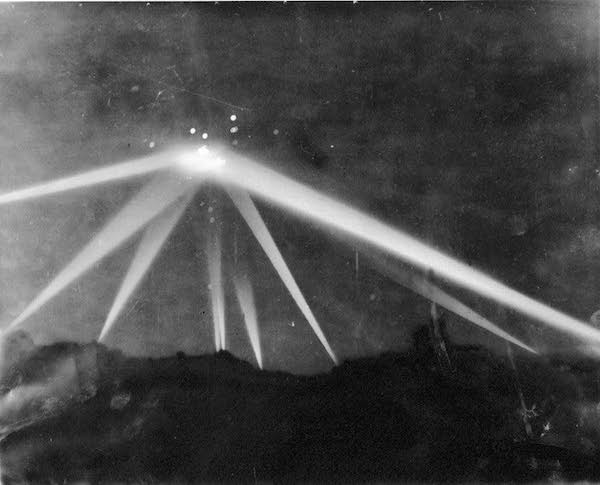 The Battle of Los Angeles is still thought by many to be one of the few "unexplained" UFO phenomena.

LA was consumed by "invasion jitters" at the time. A mere 79 days before the "battle," the Japanese had attacked Pearl Harbor, and the country was still reeling from the tragedy. There was widespread speculation that the West Coast was going to be next.

On February 24-25, 1942, air raid sirens sounded throughout Los Angeles County. At 3:16 am the anti-aircraft batteries went crazy, lobbing shells and firing machine guns at reported aircraft from Santa Monica to Culver City. Over 1,400 rounds were fired during the alert and the vigorous shelling was witnessed by thousands on the ground. Eight people died as a consequence of this anti-aircraft fire—five from falling shrapnel and three from heart attacks.

But what, if anything, triggered the event? Would you believe—weather balloons?

In 1983, the Office of Air Force History concluded that balloons were indeed responsible for inciting mass hysteria. They were released from each of the dozen anti-aircraft positions around the city every six hours and were illuminated from below by an enclosed candle that would reflect off the silver lining of the balloon itself to ensure that it was visible at night. A U.S. Army memo to President Roosevelt suggests that gunners from all but one battery mistook the balloons for planes and opened fire. The memo also stated there was no evidence of bombs being dropped, troop casualties reported, or planes shot down. The President's response was to suggest that the power to order an air alarm should be restricted to U.S. Army officials only.

And as for the above photo—it was heavily doctored. Before and after comparisons show that separate round spots of light seen where the beams converge (most likely lens flares) were modified with blobs of white paint, inadvertently creating an impression of an object "trapped" in the beams.

3The Miracle of the Sun (Portugal) 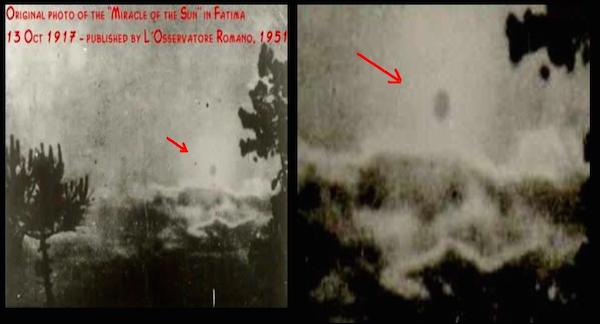 In May 1917, three children in Portugal (ages 7, 9, and 10) claimed to have encountered the Virgin Mary on their way home from tending a flock of sheep. The oldest girl, Lucia, was the only one to speak to her, and Mary told the children that she would reappear to them on the thirteenth day of each month over the next six months. She then vanished. The kids spread the word, and soon, over the next few months, villagers flocked to the site waiting for a sign from her.

On October 13, Mary "appeared" for the last time. After predicting an end to WWI and giving the children certain other undisclosed visions, the lady lifted her hands to the sky and performed "The Miracle of the Sun." Some present claimed they saw the sun dance around the heavens; others said it zoomed toward Earth in a zigzag motion that caused them to fear that it might collide with Earth (or, more likely, burn it up). Some people reported seeing brilliant colors spin out of the sun in a psychedelic, pinwheel pattern, and still others didn't see anything unusual at all.

In his book "Looking for a Miracle," author Joe Nickel theorizes that people saw a sundog, a patch of light that sometimes appears beside the sun. Sundogs are stationary, however, so that doesn't explain why people thought they saw the sun moving. He believes many in the crowd were looking directly at the sun, and as the eye muscles tire, it can give the illusion of the sun moving. Also, there was likely an element of mild mass hysteria involved, where one person sees something and gets excited about it, and others feed off it and start seeing similar things themselves.

Whether the sighting was the result of a miracle or mundane psychological and physical processes, it is still welcomed by the faithful to this day. 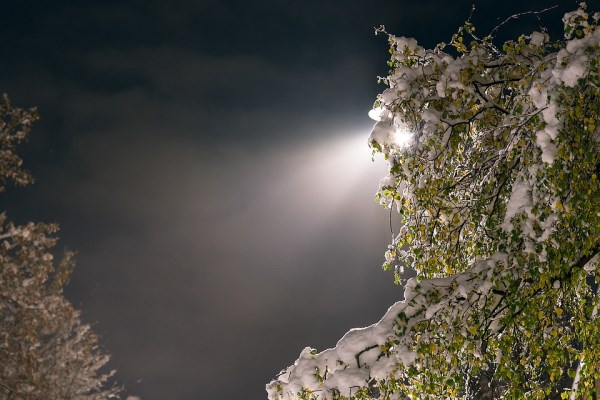 The above image shows mysterious columns of light streaming into the sky above the town of Sigulda in Latvia at the end of December 2008.

At the time (and during an unusually cold winter) the air above the town was filled with suspended ice crystals. It is believed that the columns were formed by those reflecting light from the bright street lamps and other lights on the ground and beaming it back down again. Still, scientists at spaceweather.com said the pillars are not ordinary. A leading expert in atmospheric optics said, "These pillars are mysterious. They have unexplained curved tops and even curved arcs coming from their base. Arcs in rare displays like these could be from column crystals to give parts of tangent arcs; others could be the enigmatic Moilanen arc or even the recently discovered reflected Parry arc. We don't really know—so take more photos on cold nights!" 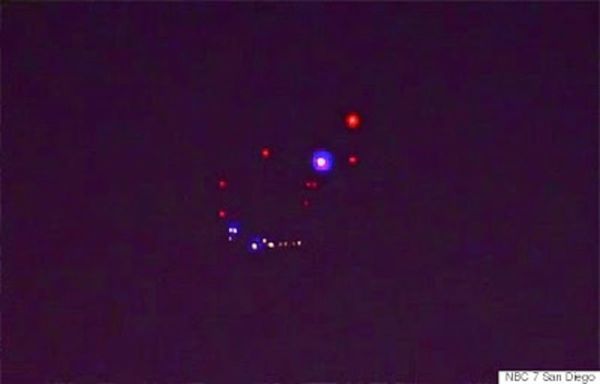 Several callers phoned into San Diego's NBC News affiliate on April 28, 2015, to inquire about this unusual, colorful grouping of aerial lights that were captured over San Ysidro, close to the U.S.-Mexico border.

"Some said they appeared to be red, blue, and green and kept flashing and changing colors. Some who saw them say the lights didn't seem to move, like those on a plane or a drone," NBC 7 San Diego reported. "We put in calls to the military here to see if they could identify what these were. So far, no response."

However, after UFO researchers and The Huffington Post called the station to ask for more information, they were all of sudden tight-lipped.

OpenMinds.tv investigative reporter Alejandro Rojas thinks he knows why: "We have received several comments pointing out how similar the light configuration in the sky is to the lights on the ground, suggesting that the lights that appear in the sky are actually just a lens flare."

"Bright lights can sometimes be reflected in the lens of the camera. In particular, a tower light can be seen pulsing at the top of a tower on the ground. One of the red lights in the sky pulses in the same manner. However, it doesn't pulse at the same time." 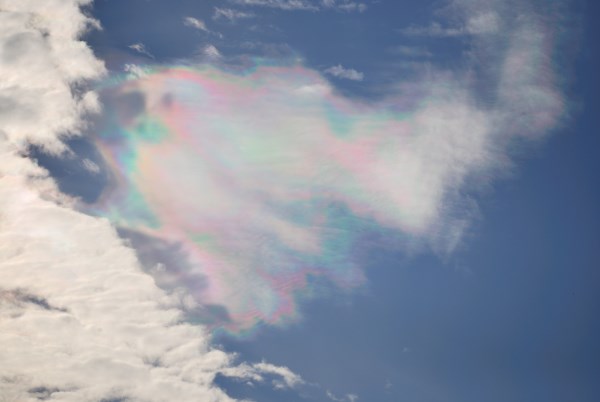 An iridescent, multi-hued cloud was spotted in Costa Rican skies and residents were left awestruck and mystified. The spectacle was reported in September 2015 in numerous cities including San Jose, Parrita, Pavas, Escazu and Hatillo.

Many witnesses took to social media to post photos and video of the luminous cloud formation, with some even noting that it looked apocalyptic. Experts said the stunning view was caused by a rare weather phenomenon called cloud iridescence, which occurs when sunlight diffracts off water droplets in the atmosphere. 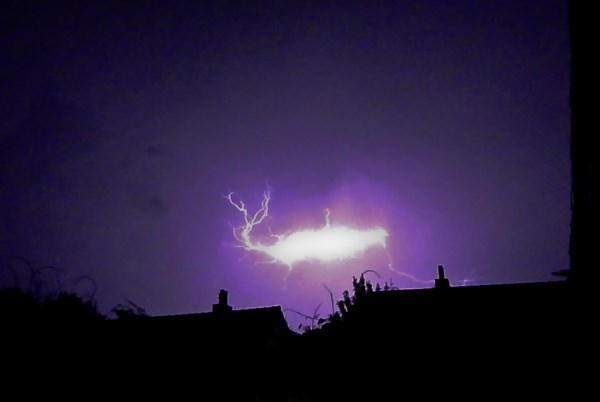 The Hessdalen Lights regularly appear above the Hessdalen Valley in the municipality of Holtålen in Sør-Trøndelag county, Norway. Unlike some "phantom light" phenomena, they can't be explained being just as headlights or passing planes. These lights form different shapes, including helixes. They often appear as rough ball shapes and sometimes spit out smaller balls that go zooming around the sky.

There are quite a few theories as to what causes the lights, one of which includes Coulomb crystals.

Scientists exploring a site near the area found an increased level of radiation coming from the rocks. Coulomb crystals form in a plasma produced by the ionization of air and dust by Alpha particles during radon decay in the atmosphere. They change shape depending on their impurities. One of the shapes they form is a helix. When radon decays, it sends out alpha particles. Alpha particles aren't dangerous when they're ejected from a source outside the body. Inside the body, they can do damage, causing cancer in the linings of the lungs and the digestive tract. If radon is on atmospheric dust, there's a chance people are inhaling it. 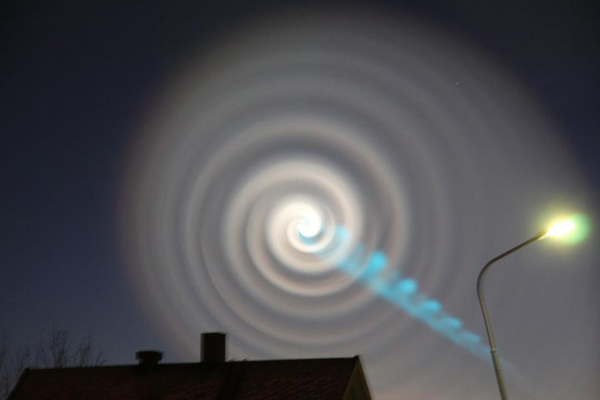 In 2009, people freaked out all over Norway because of the strange sight above. This spooky giant spiral was seen, photographed, and recorded on video from all over the country. Was it a portal to a parallel universe, perhaps?

Not quite. It was a rocket running out of fuel and spiraling out of control. The Russian Defense Ministry confirmed that it launched a Bulava missile and that the missile's third stage failed. The third stage's nozzle, which directs the rocket's exhaust plume, may have fallen off or been punctured, causing the exhaust to come out sideways instead of out the back. 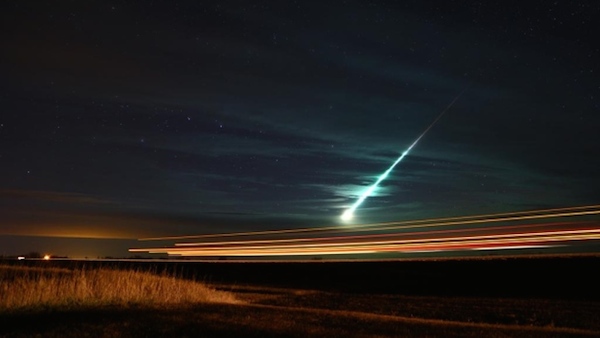 In November 2015, people across Saskatchewan were surprised by a strange fireball that that streaked across the skies. Loud booms were heard as well.

It was a Taurid meteor that lit things up, and it was visible from Saskatoon to Weyburn. Martin Beech, an astronomer at the University of Regina's Campion College, said chances are good some material got to the ground, but how much is hard to tell. The fact that people heard booms in the Kelvington area could mean material landed near there. "These are all indicators that material did get to the lower atmosphere," Beech said. "Most of it would burn off in the upper atmosphere. That was the trail and the flash that people were seeing."

The Taurid meteor shower has been going on since September 2015, but it's still a good time to try to catch a glimpse of a fireball in the night sky. Astronomers are saying this year's shower has been especially active.The last week of October and first two weeks of November have historically proven to be great times for stargazing.