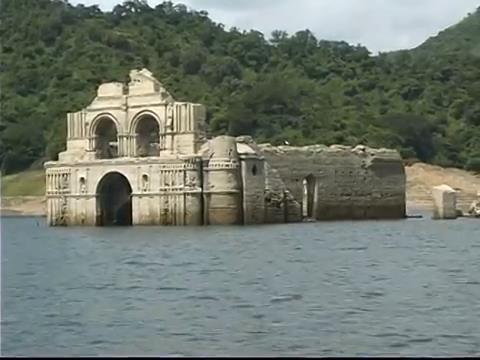 In 2015, the remains of a Colonial-era church emerged from the receding waters of a river in the southern Mexican state of Chiapas. The Grijalva River watershed was hit by a drought this year, which caused the water level in the Nezahualcoyotl reservoir to decrease by 82 feet.

The church was built in the mid-16th century by a group of monks (led by Friar Bartolome de la Casas) in the Quechula region, which was formerly inhabited by the Zoque people. It was originally lost to the waters of the Nezahualcoyotl reservoir in 1966 when it flooded. 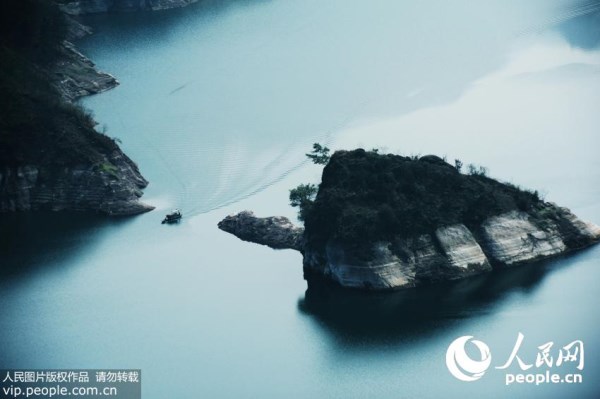 Every year, thousands of Chinese tourists flock to the Gorges Reservoir to see an elusive turtle-shaped island rise from the waters of the Muodaoxi River. The event, dubbed "spring turtle rising from the water," is celebrated by residents because turtles are considered auspicious and a sign of longevity.

It sounds like a fascinating natural phenomenon, but the “magic” is man-made. The water level of Muodaoxi River is controlled by the Three Gorges Dam. Every spring, the reservoir supplies water to the areas downstream, bringing down the water level and exposing the island.

The appearance of the island depends on the amount of floodwater heading downstream. For nine months out of the year, it is either fully submerged or only has its tip exposed. The turtle shape is fully visible when the water level is between 163 and 168 meters. If the water falls to around 145 meters, the rock becomes connected to the mainland, losing its unique shape.

3The Argentinian town that resurfaced after being underwater for 30 years 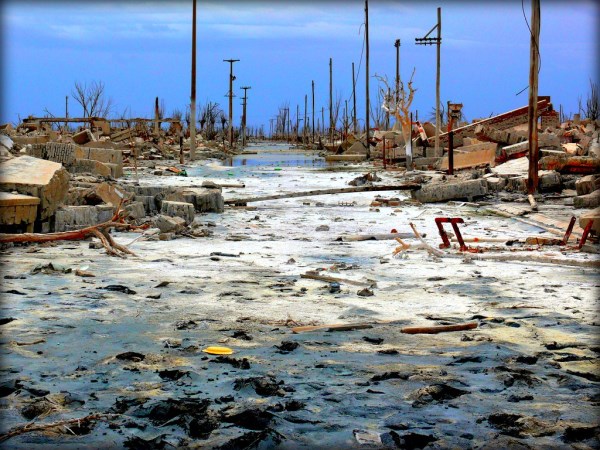 Back in the 1920s, a tourist village named Villa Epecuen was established along the shores of Lago Epecuen, a salt lake some 600 kilometers southwest of Buenos Aires, Argentina. Lago Epecuen is like most other mountain lakes, except for one important difference—it has salt levels second only to the Dead Sea, and ten times higher than any ocean.

The town's population peaked in the 1970s with more than 5,000 people. Nearly 300 businesses thrived there, including hotels, hostels, spas, shops, and museums. During that time, a long-term weather event was delivering far more rain than usual to the surrounding hills, and Lago Epecuen began to swell. On November 10, 1985, an enormous volume of water broke through the dam and inundated much of the town. By 1993, the slow-moving flood consumed the town until it was covered in 10 meters of water.

Nearly 25 years later, in 2009, the wet weather reversed and the waters began to recede. Villa Epecuen started coming back to the surface. No one returned to the town, except 81-year-old Pablo Novak, who is now Villa Epecuen's sole resident.

4The flooded Church of St. Nicholas was submerged in an artificial lake 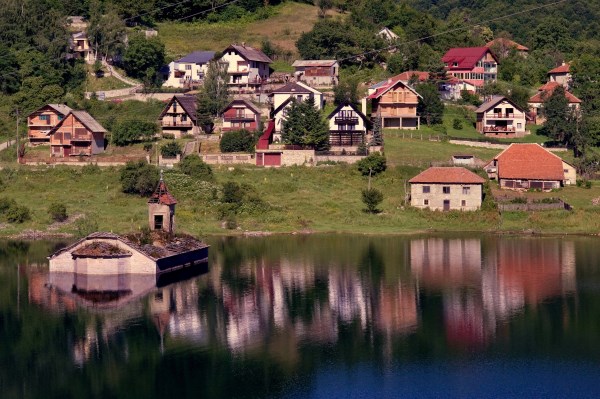 Not far from the highest waterfall in the Balkans lies Mavrovo Lake, a national park in Macedonia that's famous for its semi-submerged church. Set in breathtaking scenery amid grassy plateaus and snowy peaks, the abandoned church of St. Nicholas was reportedly the victim of an artificial lake created to supply water to a local power plant.

The top half of St. Nicholas is still visible, emerging from the lake immediately offshore of the village that it once served. Today, weeds grow from the ruins and the tiled roof of the tower is collapsing, but this ruined building will remain a point of interest on the landscape for years to come.

5The amazing underwater sanctuary that transforms into a county park 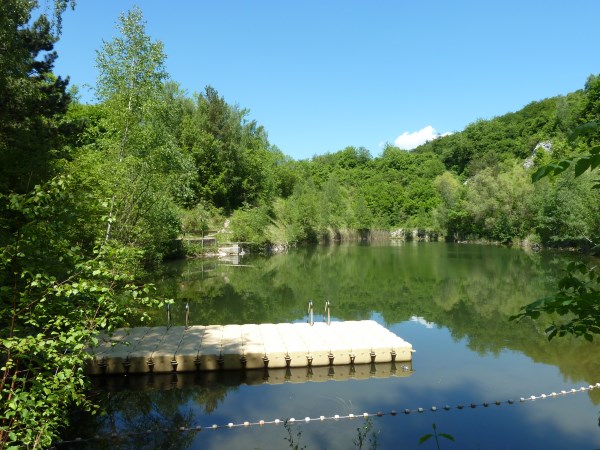 The Grüner See (also known as “Green Lake") is located in Styria, Austria. It is known for its scenic views and emerald-green water that trickles down from the surrounding snow-capped mountains. During the winter, before the ice melts, the lake is only 1-2 meters deep, and the surrounding area is used as a county park. However, by spring, the basin of land below the mountain fills with water, transforming the lake into an underwater sanctuary nearly 12 meters deep.

The Grüner See is pollution-free and is an immensely popular tourist destination for hikers, campers, and adventurers looking to enjoy nature. 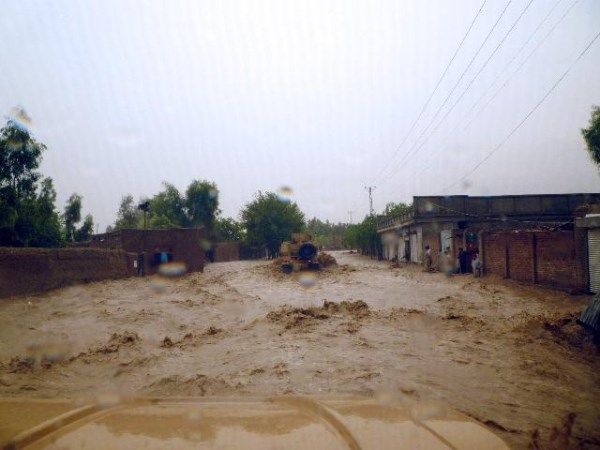 These astonishing pictures show an entire village emerging from a lake five years after it was completely flooded following a massive earthquake. Almost ten buildings—including homes, offices, and a primary school—have emerged from the water since the village of Xuanping was destroyed in 2008.

An 8.0-magnitude earthquake devastated the village in Beichuan County, Sichuan Province of China, causing it to be completely flooded by a barrier lake. 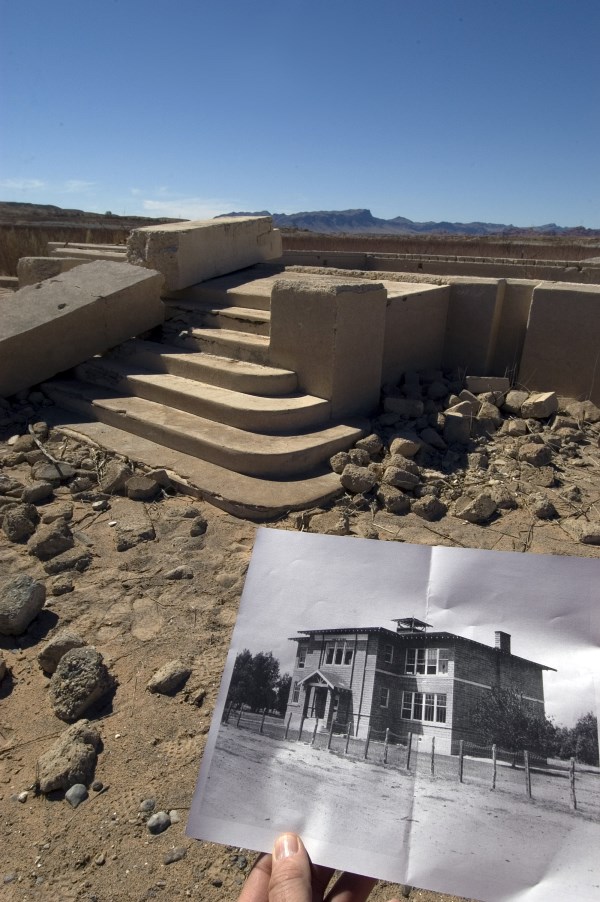 The Mormon pioneer town of Saint Thomas was flooded 70 years ago by the rising waters of the Colorado River when it was dammed to create Lake Mead. Its ruins are now exposed as a continuing drought keeps the reservoir near historically low levels.

Thomas was established in 1865 at the confluence of the Muddy and Virgin rivers by Mormons dispatched to southern Nevada to plant cotton and expand the reach of their church toward the west coast. The town had grown to a population of 500 by the time it was inundated in 1938.

The underwater concrete foundations of Saint Thomas were first seen by fishermen in 2003. Today, tamarisk bushes cover the landscape. The US Bureau of Reclamation is currently evaluating proposals to manage the drought on the river, which supplies water and power to millions of people in the western states.

8The Venezuelan church that resurfaced after 33 years underwater 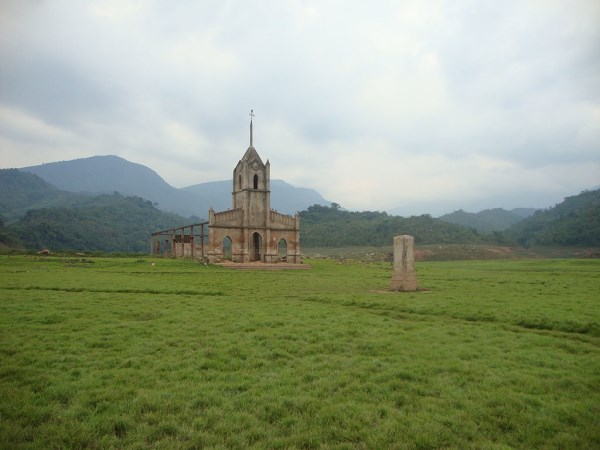 Between 1985 and 2008, fishermen and daytrippers traveling by boat along the lake formed by the Uribante Reservoir in Táchira, Venezuela were presented with an eerie sight—a mildewed cross rising crookedly out of the water. It was clearly attached to something anchoring it—something big and deep beneath the surface.

In 2008, the cross started to rise higher and higher out of the water, revealing more of the gothic structure below. It was literally just the tip of something much more massive.

In reality, the structure was not rising out of the water, but rather the water of the reservoir was receding, revealing what the lake had concealed for more than two decades. By 2010, the water had receded almost entirely, revealing a large stretch of flat land and a towering, gothic church that was once nearly submerged.

The church belonged to the city of Potosi, which in 1985 was purposefully flooded by the damming of a nearby river to create hydroelectric power. All of Potosi's citizens had to be relocated. For 20 years, all that remained of their former life was the cross at the top of the church's steeple, once reaching high into the sky, and then brought down to earth and nearly—but not completely—drowned.