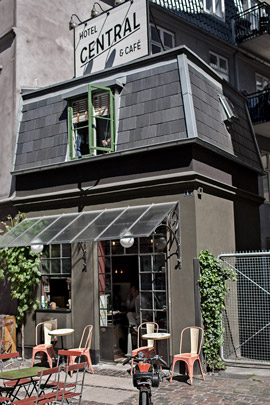 For about $300 per night, you can enjoy the exclusivity of staying in the world's smallest hotel. A double room—measuring just eight-foot by ten-foot wide—is the only room in theCentral Hotel. The hotel is 12 square meters/130 square feet and fits neatly above Copenhagen's Central Café. (With just five indoor seats, the Central Café can also claim to be Copenhagen's smallest coffee shop.)

Equipped with a TV and iPhone docking station, this room has just enough space to swing a cat in, but not much more. There is also a picture of legendary British comedian Ronnie Barker— not because he stayed there, but because the owner of the hotel is a huge fan. 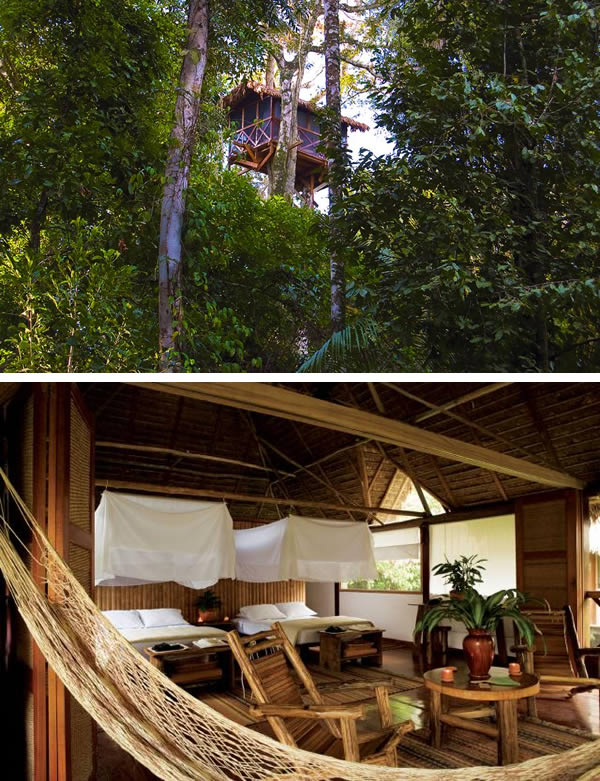 Built on a private platform next to the famous Inkaterra Canopy Walkway at some 90-ft (27-mt.) above the lush jungle floor, the Inkaterra Canopy Tree House in the Peruvian South Eastern Amazon provides a service that is second to none and a jungle stay like no other.

The tree house is linked by a suspension bridge to the resort's quarter-mile, 103-ft high canopy walk (of which you'll get a spectacular nighttime tour). You are pretty much sleeping with the wildlife in this cabin. It boasts a traditional "Ese-Eja palm-thatched roof and wooden floors" and patrons even get walkie talkies for contacting the butler. 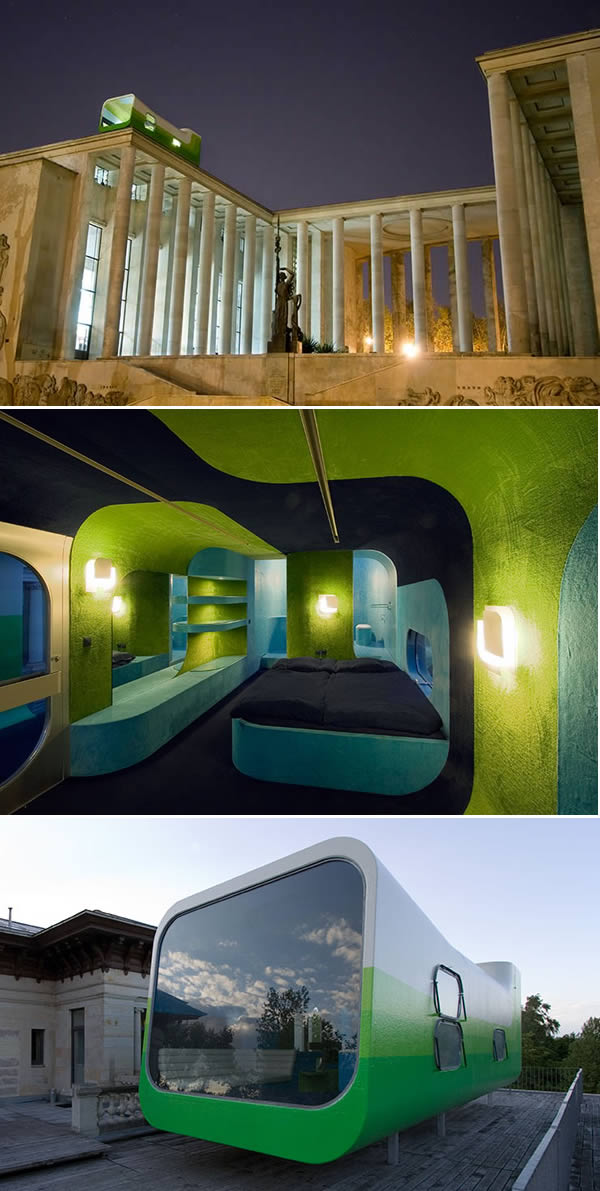 Everland is a hotel with only one room, but that one room includes a bathroom, a king-size bed and a lounge. Everland is also an art installation, and as such, this hotel travels! It has been "parked" in the most unusual places, including the roof deck of the Museum of Contemporary Art in Leipzig, Germany, and the roof of Palais de Tokyo (with a spectacular view of the Eiffel Tower) in Paris.

Considering how unique a night in this hotel is, the price is pretty reasonable—you can get the room and its unique views for €333 during the week, or €444 on the weekends.

4A Room for London – London, England 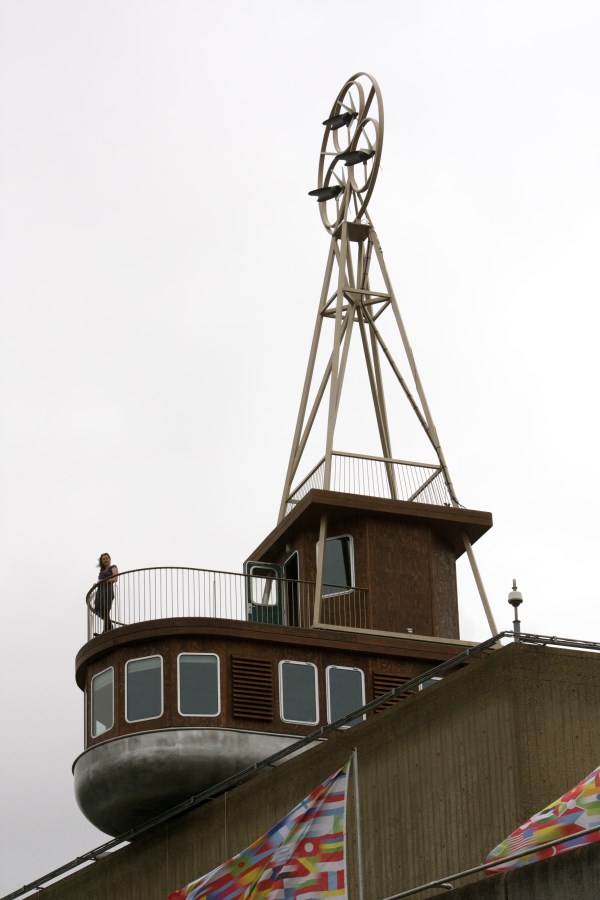 Installed in 2012, A Room for London is a single-room, boat-shaped hotel seemingly moored on the roof of the Queen Elizabeth Hall. The unexpected structure was developed by Living Architecture, a social enterprise that operates some exceptionally designed holiday homes throughout Britain, and Artangel, an organization that commissions creative projects by contemporary artists.

Its unusual design, by David Kohn Architects and the artist Fiona Banner, was selected from over 500 entries submitted in an open competition. The hotel draws inspiration from Joseph Conrad's book Heart of Darkness, which documented the author's riverboat voyage through the Congo in the late 19th century. Although firmly on dry land—despite its prow extending over the lip of the building—the hotel is close to the water. Guests can observe the tugboats and riverboat services that continually sail past on the Thames.

The residence accepts only two guests at a time (names are determined by ballot and identification is required at check-in), and stays are limited to one night. Bringing additional visitors on board is prohibited.

A Room for London was initially intended to be open only during 2012, but an unexpected extension allowed it to remain in place during 2013, and it has been open ever since. 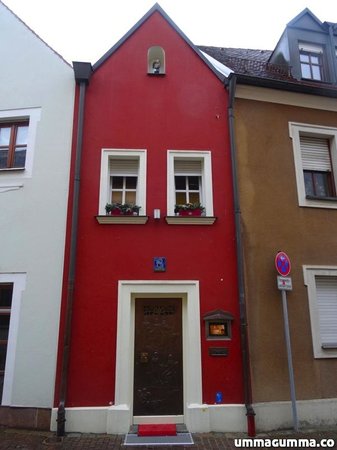 The second smallest hotel in the world is just 2.5 meters wide, and occupies a mere 53 square meters of space, but is fitted with many modern accessories, from flat screen televisions to a mini spa. With just one room, only one couple at a time can stay at Eh'haeusl, in Amberg, Germany.

The house was originally built in 1728 by a couple who wanted to get married, but the city council had a rule that allowed only homeowners to tie the knot. To get around the law, they picked up a strip of empty land between two buildings, ran a quick wall on the front and the back and slapped a roof on top. They declared it their home. The council fell for it and allowed the couple to get married.

After the house had served its purpose, they sold it to the next couple with the same problem before moving into a larger rented space. With a different couple as occupants every few weeks, it became known as Eh'haeusl, or "The Wedding House."

Today, this extraordinary hotel is owned by Marina Schreiner, who welcomes couples in love from all over the world. According to local lore, couples who stay at the hotel live happily ever after. 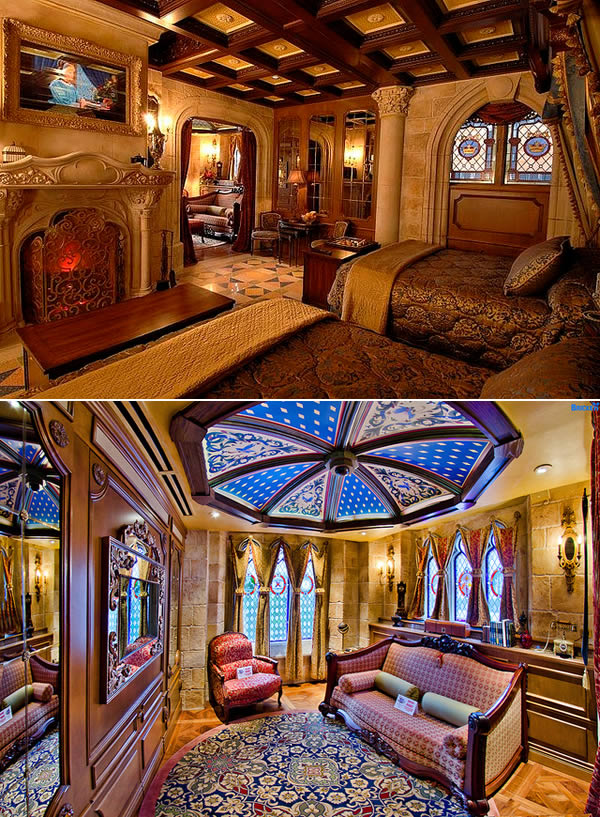 It's so exclusive, money can't buy it. It's so elusive, only a lucky few have ever spent the night. Unless you're a frequent visitor to Walt Disney World (or a rabid fan of all things Disney), you may not even know it exists.

The entrance, at the base of Cinderella's Castle, is unassuming. A simple door that leads to an elevator will bring you to the only overnight room in the Magic Kingdom—The Cinderella Castle Suite.

The elevator opens to a foyer, where the last remaining glass slipper, Cinderella's coronation crown and scepter, and some of the pumpkins from her pumpkin collection are on display. The room itself, while lovely, is fairly small, at approximately 650 square feet. There are two queen sized beds in the chamber and a pull-out sofa in the adjacent parlor. There's an electric fireplace, with three hidden Mickeys inside.

From the parlor, guests can view the Magic Kingdom's nightly fireworks through the window from a completely different vantage point than any other in the park. The windows are made of stained glass and tell the story of Cinderella's journey from pauper to princess. Staying in the suite includes access to a 24-hour concierge.

The suite was originally intended to be an apartment for Walt Disney, but he died prior to the opening of Walt Disney World. It didn't have a specific purpose for many years until 2007, during "The Year of a Million Dreams," when it was given away as the grand prize to a family every day.

Some celebrities have also spent a night in the special suite. Kevin and Danielle Jonas celebrated their first wedding anniversary here, and Tom Cruise brought his daughter Suri on their Walt Disney World vacation in the summer of 2012.

7The One Hotel - Angkor, Cambodia

Guests can be assured of total attention—this sole accommodation sits atop a bistro in a French colonial townhouse and includes a rooftop terrace with a queen size daybed, an outdoor shower, and a swanky jacuzzi.

The 360-square-foot bedroom's centerpiece, a modernist sleigh bed, dominates the high-ceilinged space, and an iPod and a mobile phone are provided. The sleek terrazzo bathroom gets lots of natural light from the back garden.

Double-paned windows in the main room block the neighborhood noise from late night revelers in this artsy part of town. Staff are all alums of the local training institute for Cambodian youth, and the bistro's chef is known as a prodigy for his innovative Cambodian cooking. 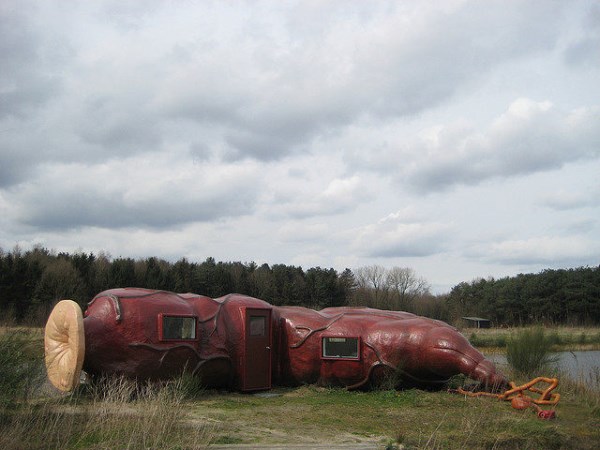 Ever wanted to spend a cozy night inside a massive colon? Then the Hotel CasAnus, near Antwerp, Belgium, might just be for you.

Originally a cheeky and titanic piece of art, the hotel rests in the Verbeke Foundation Art Park and is the work of Dutch designer Joep van Lieshout. The slim, curved interior of the furnished anus features a double bed, windows, heating, and of course, working plumbing. The hotel's exterior is sculpted with bulging veins and a giant puckered (non-functional) sphincter on one end, and painted the visceral red of exposed organs. Hotel CasAnus almost seems out of place in the idyllic art park, near a placid pond, yet it is composed of soft, natural angles.

Despite the stomach-churning imagery, visitors still flock to the site to spend a night in the big colon, which is surrounded by black swans and an unobstructed view of the night sky. Hotel CasAnus is somewhere between theme bed and breakfast and gross-out stunt tourism. Whatever the draw, guests can't help "butt" visit. 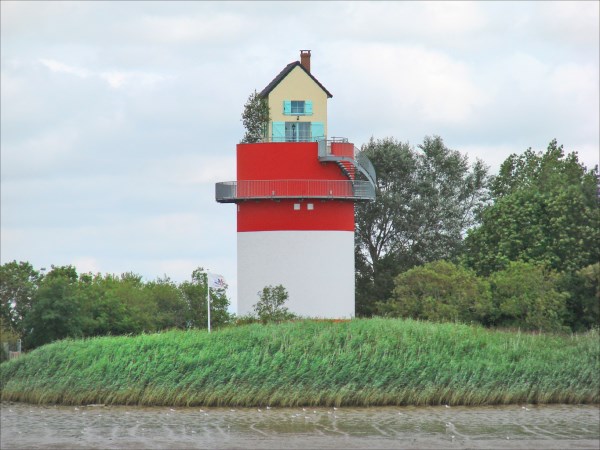 This artistic project was designed by Japanese artist Tatzu Nishi for the Estuaire 2009 Nantes-Saint-Nazaire art event. A house that sits on top of a factory smokestack, La Villa Cheminée offers a double bedroom and kitchen as well as other basic amenities. It sleeps two and has a wood-fired heater and a small garden outside the gîte, with views of the Loire.

This quaint and warm home comes complete with its own chimney and is a must for those who want to defy reality. 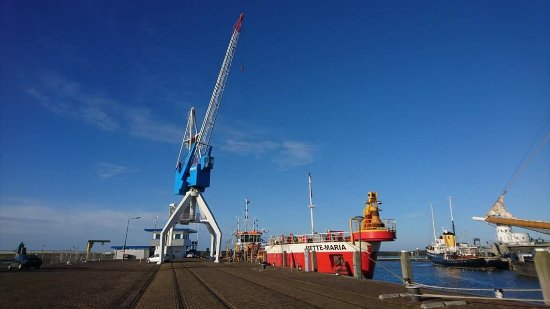 The Harlingen Harbour Crane hotel is as unexpected as it is awe-inspiring. A 150-foot tall crane has been converted into a hotel, where guests can now enjoy panoramic views while towering above the Wadden Sea.

Experience the power of over 143,000 pounds of steel your fingertips, as you control the crane and can choose your view and positioning with the touch of a button. That's right—you can rotate the hotel a full 360 degrees!

Nicknamed "de spin" (the spider), this two-person cabin has computer controlled room temperature, high-tech lights, a king size bed, and a flat-screen TV. The Spartan cage ladders have been replaced by two specially designed elevators—one to bring you to a platform between the crane's legs, and the second to take you up to the heart of the crane where the bedroom can be found.