1The British soldier who fought in both World Wars, was shot in the face, head, ankle, leg, hip and ear, survived a plane crash, tunneled out of a POW camp...and even more 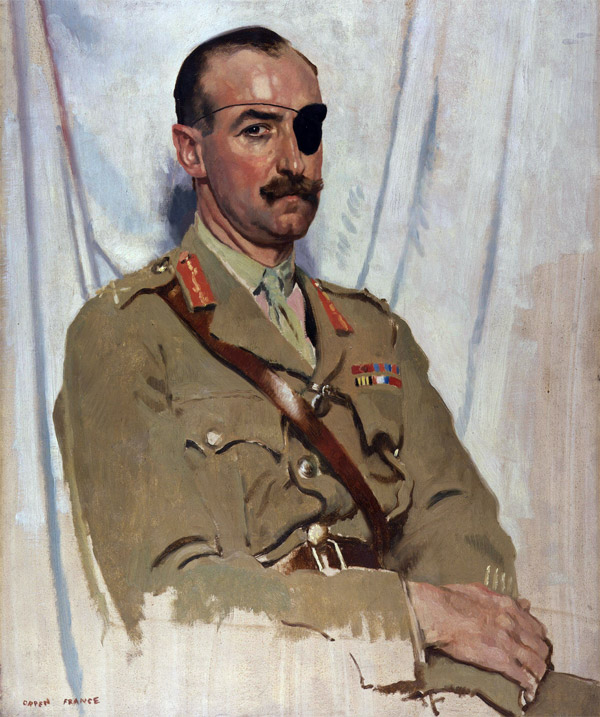 "We are told that the pen is mightier than the sword, but I know which of these weapons I would choose," said Sir Adrian Paul Ghislain Carton de Wiart.

As a British Army officer, Carton de Wiart served in the Boer War, the First World War and the Second World War. He was shot in the face, head, stomach, ankle, leg, hip, and ear. He survived two plane crashes. He tunnelled out of a prisoner-of-war camp. And he bit off his own fingers when a doctor refused to amputate them.

Describing his experiences in the First World War, he wrote, "Frankly I had enjoyed the war."

At the age of 71, he married a divorcée 23 years his junior and settled in Ireland, where he took up a life pursuing salmon and snipe. He died peacefully at the age of 83.

His autobiography, called HAPPY ODYSSEY, is one of the most remarkable military memoirs ever written. 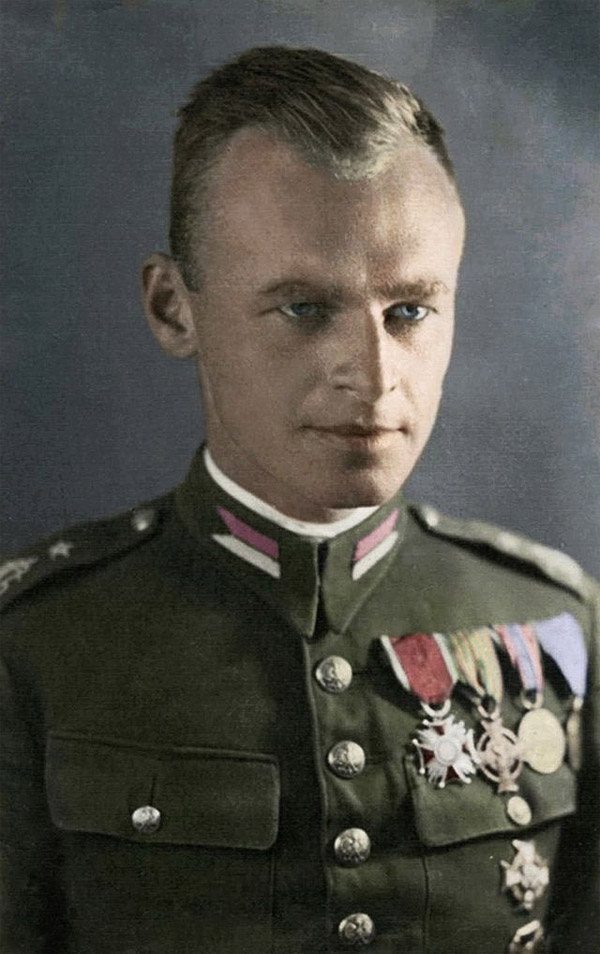 There's no denying that life in Nazi concentration camps was truly hell. The Auschwitz death camp, located in southern Poland, was the largest of the concentration and extermination camps.

During World War II, millions of Jewish people and perceived enemies of the Nazis were sent to their deaths in concentration camps. Upon hearing about these atrocities, a 39-year-old veteran of the Polish-Soviet War and member of the resistance, Witold Pilecki, volunteered to be imprisoned at Auschwitz to secretly collect intelligence and then escape.

While in the concentration camp, Pilecki was responsible for informing the Allies of the atrocities he witnessed at Auschwitz and organizing a resistance movement.

In 1943, after three years in Auschwitz, Pilecki escaped. He took part in the Warsaw Uprising in August 1944 and served the London-based Polish government in exile, but was executed in 1948 by Stalin's police for “foreign imperialism.”

Pilecki's exploits were suppressed by the Communists for years, and it wasn't until 1989 that the world heard of this heroic man and his bravery. His story is recounted in the book The Auschwitz Volunteer: Beyond Bravery.

3The U.S. soldier who single-handedly held off over 100 Japanese soldiers in WWII 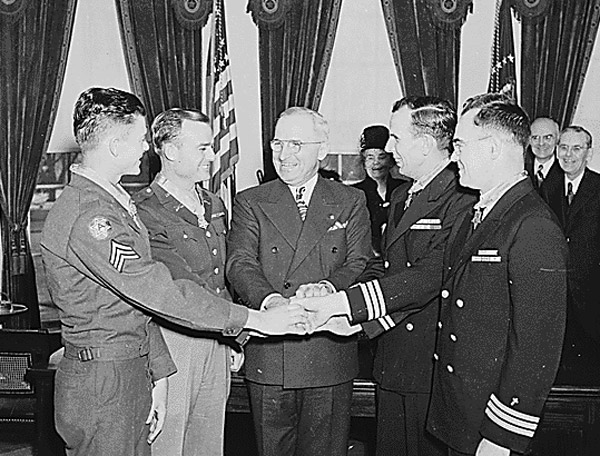 Private John R. McKinney received the Medal of Honor in World War II for his bravery during the campaign to recapture the Philippines from Japanese forces in 1945. McKinney single-handedly secured a crucial battlefield against 100 Japanese soldiers before reinforcements arrived.

According to one account, "Thirty-eight dead Japanese around the machine gun and two more at the side of a mortar 45 yards distant was the amazing toll he had exacted single-handedly. By his indomitable spirit, extraordinary fighting ability, and unwavering courage in the face of tremendous odds, Pvt. McKinney saved his company from possible annihilation and set an example of unsurpassed intrepidity."

4The WWII soldier who was captured, began to laugh and when the enemy joined in the laughter, he whipped out his machine gun and killed everyone

In 1945, US Army First Sergeant Leonard A. Funk, Jr. and his men were captured by the Germans around Holzheim, Belgium.

At one point, he looked at a screaming German officer and couldn't help but burst into laughter. Although later he insisted he tried to stop, the laughter just kept coming. His outburst and non-compliance was so bizarre that many of the Germans began to chuckle, which made Funk laugh even harder. The German officer was bacame increasingly agitated, and was screaming louder and getting angrier.

Then, Funk did the unthinkable. In a lighting-fast maneuver, he swung his Thompson around and opened fire, emptying his magazine. Within a matter of seconds, Funk had cut the officer in half and reloaded. He opened fire on the other Germans while shouting to his men to pick up weapons and join him.

The small force was able to quickly kill 20 enemy soldiers before the remainder threw down their guns and surrendered. For these darkly humorous actions, Leonard Funk was awarded America's highest award, the Medal of Honor. 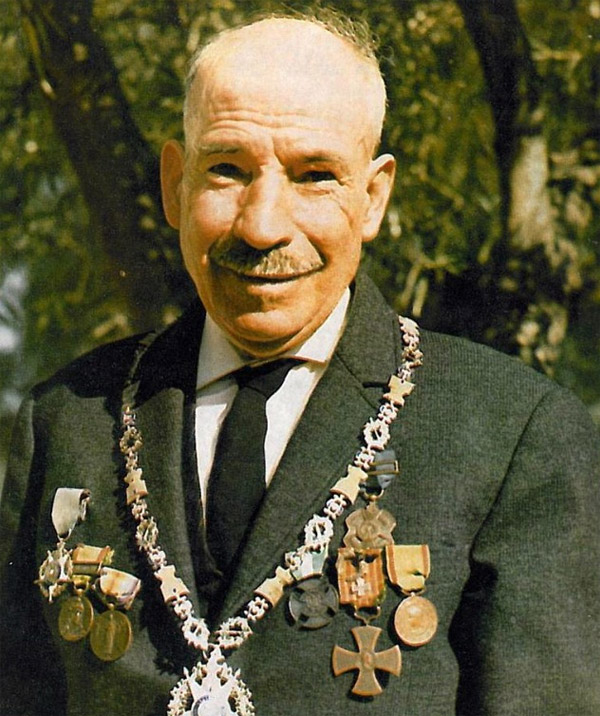 The most decorated Portuguese soldier of World War I and the only soldier awarded the country's highest honor, Milhais found himself in the midst of the battle of La Lys, in Belgium, covering the withdrawal of Portuguese and Scottish soldiers. Within a few hours of the skirmish, 1,938 men were killed, 5,198 wounded and about 7,000 taken prisoner.

Milhais was in charge of a Lewis gun on April 9, 1918. During Operation Georgette, when the German Army attacked his division, Milhais stood up with the machine gun and defended his regiment against assaults by Germans, causing many casualties. He managed to cover the retreat of Portuguese and Scots alike despite coming under heavy attack himself. He fired in all directions and stayed at his post until he ran out of ammunition.

When he Germans decided to go around, Milhais found himself alone behind the enemy lines for three days. On the third day, Milhais, still carrying his Lewis, rescued a Scottish major from a swamp and the two reached Allied lines.

His actions were later described as having been "worth a million men," hence the nickname. Unfortunately, after the war ended, the Portuguese economy was near bankruptcy and Milhais faced difficulties in providing for his family. The Portuguese government promised to help but, instead of an allowance, they were only able to name the village where he was born after him: . He died in 1970 in Valongo of Milhais. 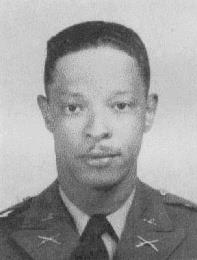 As part of a segregated African-American division in World War II, First Lieutenant John R. Fox volunteered to stay behind as an observer in the Italian village of Sommocolonia in 1944. American forces had been forced to withdraw from the village after it had been overrun by the Germans.

From his position on the second floor of a house, Fox radioed in to have the artillery fire adjusted closer to his position, then radioed again to have the shelling moved even closer. The soldier receiving the message was stunned, for that would bring the deadly fire right on top of Fox's position; there was no way he would survive. When Fox was told this, he replied, “Fire it.” This shelling delayed the German's advances until other units could reorganize to repel their attacks.

Fox's action permitted U.S. forces –who had no choice but to withdraw – to organize a counterattack and regain control of the village. After the units had retaken Sommocolonia, they found Fox's body along with the bodies of about one hundred German soldiers.

Fox posthumously received the Medal of Honor in 1997 for willingly sacrificing his life. 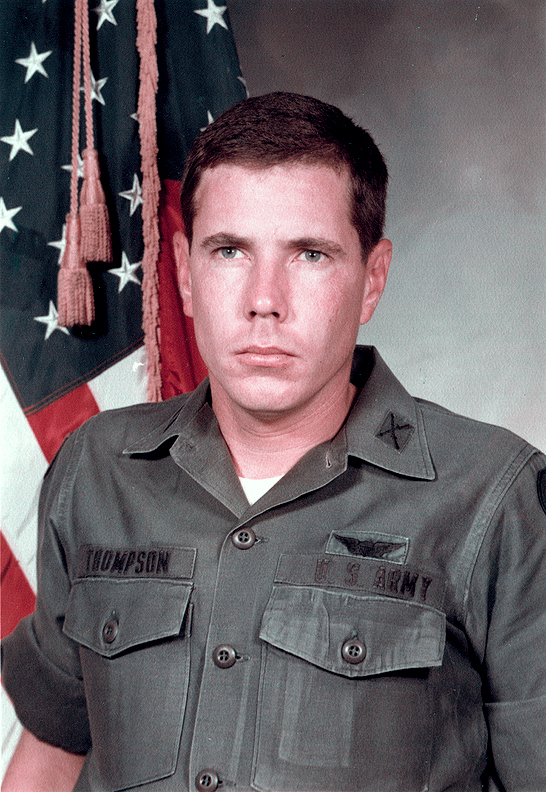 Hugh C. Thompson Jr. has been aptly described as "The hero of the My Lai massacre." He was the soldier who stepped in to stop fellow soldiers on a murderous rampage against civilians at the Son My village during the Vietnam War.

On March 16, 1968, Thompson and his observation helicopter crew were ordered to support Task Force Barker's search and destroy ground operations in Son My. "We kept flying back and forth, reconning in front and in the rear, and it didn't take very long until we started noticing the large number of bodies everywhere. Everywhere we'd look, we'd see bodies. These were infants, two-, three-, four-, five-year-olds, women, very old men, no draft-age people whatsoever," Thompson later recounted.

At first, they thought the artillery bombardment caused all the civilian deaths on the ground, but later became aware that Americans were murdering Vietnamese villagers after a wounded civilian woman they requested medical evacuation for was murdered right in front of them.

Thompson and his crew, in disbelief and shock, returned to their helicopter and began searching for civilians they could save. He located as many as he could, and persuaded them to follow him to a safer location. He later made an official report of the killings. Eventually, he testified against United States Army personnel in a long and painful journey to ensure justice. "I'd received death threats over the phone...Dead animals on your porch, mutilated animals on your porch some mornings when you get up," he later revealed.

In 1998, exactly 30 years after the massacre, Thompson and the two other members of his crew were awarded the Soldier's Medal, the United States Army's highest award for bravery not involving direct contact with the enemy. Thompson's story is recounted in Trent Angers' book The Forgotten Hero of My Lai: The Hugh Thompson Story. 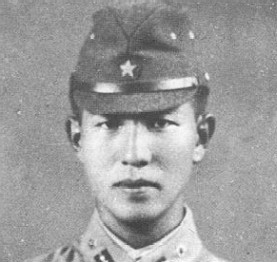 In 1944, the Japanese army sent Lt. Hiroo Onoda and several other units to the sparsely-populated Philippine island of Lubang to conduct guerrilla warfare. Although the war ended soon afterward, Onoda and his compatriots were never officially told, so they continued to stay and fight with locals for the next thirty years.

Onoda stayed in the jungle for decades, living off of coconuts and bananas. In October 1945, the Japanese government attempted to notify soldiers who were hiding in remote jungles that the war was over, but Onoda and his compatriots believed the newspapers and flyers that had been dropped by aircraft to be Allied propaganda. The men scrutinized every word of the flyers, but decided that they would not surrender until their commanding officer gave them the word. Search parties were issued, but no one could ever find the men.

Over the years, all of the other men died. One man decided to surrender and sneaked away from their camp. Onoda lived alone for another twenty years, and became legend among Japenese and Filipino nationalists who believed that he had died. In 1974, a backpacker found Onoda and tried to convince him that the war had indeed ended, but Onoda stubbornly refused to believe him.

The backpacker, Norio Suzuki, left the island and arranged a meeting between Onodo and his now-retired commanding officer. When Onodo learned the truth, he was shocked beyond belief. He was hailed as a hero in Japan, and was pardoned for the Filipino men he had killed and injured while living on the island for all those years. Once reintegrated into society, Onado decided that he preferred a simple, solitary lifestyle. He moved to Brazil and ran a ranch, returning to his island just once more in 1996.

Onoda published his memoirs in 1974. In English, the book is called No Surrender: My Thirty-Year War.