People seems to be obsessed with Kylie Jenner's lip, take a look at some of the most disastrous results of women trying to copy the sexy lip trend. 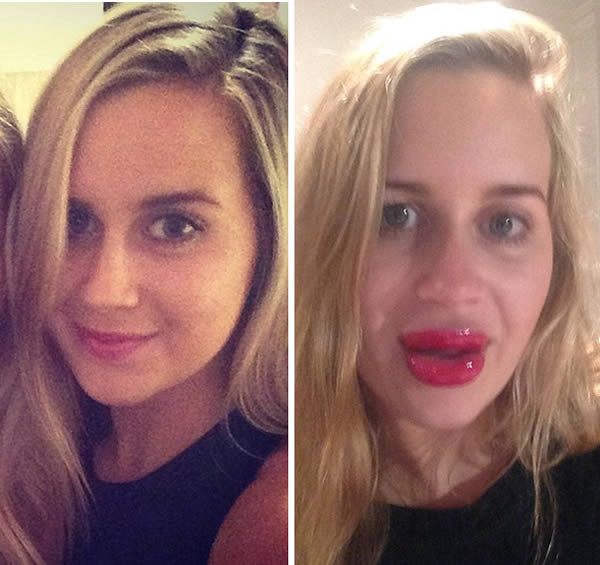 A woman who bought a product to emulate Kylie Jenner's full pout was left with hugely swollen lips. Australian Brittany Forster used a lip enhancer to give her the voluptuous lips of the Keeping Up With The Kardashians star but was left regretting her decision. After applying the device to her mouth for two minutes, she took it off to reveal her lips had swollen to more than twice their size.

She said she worried the effects would be permanent, but now sees the funny side after discovering the swelling and bruising would be gone in a few days.

Luckily for us, there is a video to relive the moment. 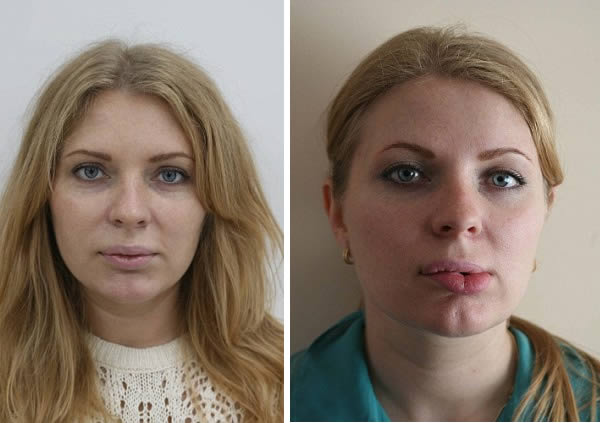 Hannah Costayer was a pretty teen at just 18 when she decided to have lip injections, not knowing that they would change her appearance forever.

The procedure initially went well but she soon started to notice problems. Hannah's bottom lip started to swell and, in time,became lumpy. Although Hannah tried to have her lips fixed, a second lip job saw little improvement and she is now looking at having another operation.

In January 2015, she appeared on the TV show Botched Up Bodies to tell her story. 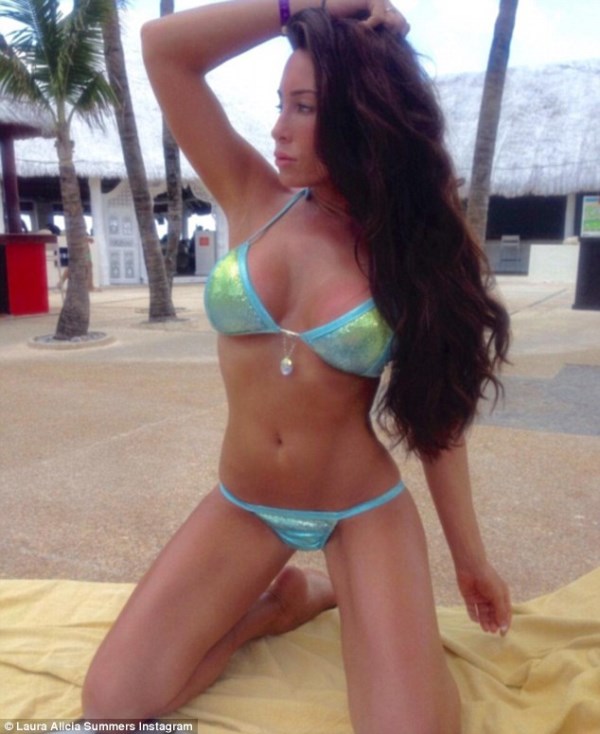 Laura Summers was addicted to plastic surgery – until, a day after a lip jab, she woke up looking like this. The model, who had spent £60,000 ($90k) on procedures, said: “I looked in the mirror and screamed. All I could see was a monster looking back at me.”

Her lips had ballooned to four times their normal size after a botched jab that was meant to make them sexily plump. Now Laura, once branded the vainest woman in Britain, wants to warn others about the risk of cowboy cosmetic companies.

Her nightmare started when she had the fillers put in by injection. It only took a few minutes, and it all seemed really professional. But soon, her whole face was numb and she began dribbling uncontrollably. The next day she woke up to the horrifying swelling and went straight to hospital. However, medics could do little as they did not know what had been used as the filler.

She was eventually prescribed antibiotics to help the swelling but it took months for her lips to begin to go down. Even now, more than 20 months on, her lips are still not back to their normal size. 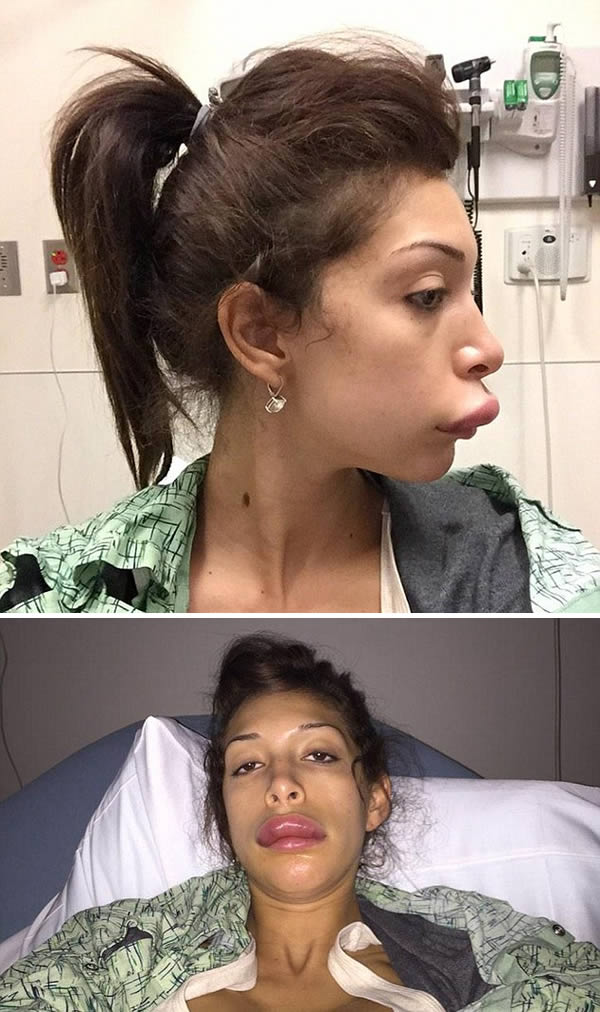 She's no stranger to plastic surgery after having her breasts increased from a size C to a size D in 2013. But Farrah Abraham's recent experience with cosmetic enhancements may keep her away from the doctor for good.

On January 2015, the 23-year-old Teen Mom star revealed on Twitter that her recent lip injections went so haywire that she had to check into the emergency room. In the photo above, the MTV star shows her profile – her top lip is so swollen Abraham looks as if she has a duck face.

In another shot, the mother of one is sitting in a hospital bed in a light grey tank top. On her arm is a Nova patch which releases a powerful painkiller. Farrah's top lip, which is pink and swollen, is about 10 times larger than her lower lip. She has no makeup on and looks depressed over the cosmetic procedure gone wrong.

The beauty was quickly mocked on social media for her new lips, being compared to Turanga Leela from the animated series Futurama, as well as a character from The Simpsons.

As the story goes, she actually blames her plastic surgeon boyfriend for not stopping her from the continued use of the injections. It wasn't until Caputo, 30, posted pictures online that her obvious "before" and "after" ballooning results made her an internet joke almost overnight. She became depressed and suicidal after realizing that her addiction completely altered her appearance. The modeling offers stopped. She eventually went into therapy.

Priscilla has since stopped any lip procedures and is slowly regaining her original lip proportion. 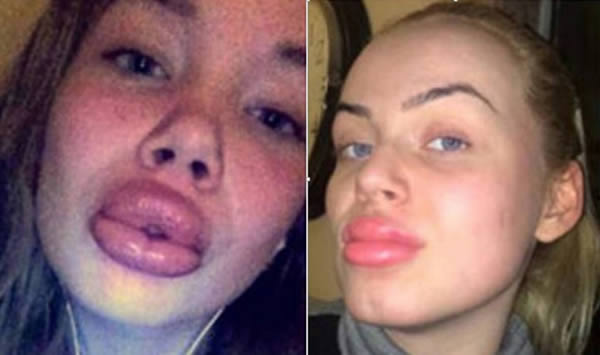 In an effort to get a Kylie Jenner-worthy pout, some women have been turning to at-home lip jobs, also known as "bottle lips." Two of these woman are Yrja Ás Baldvinsdottir and her sister Birgitta Ás, from Reykjavik, Iceland.

To achieve a super-sized pout, Yrja put her lips into a plastic bottle and sucked the air out, causing her lips to swell. She said: "I just wanted to try it and see what they would look like, I've never done it before, and I won't be doing it again. My lips turned blue." 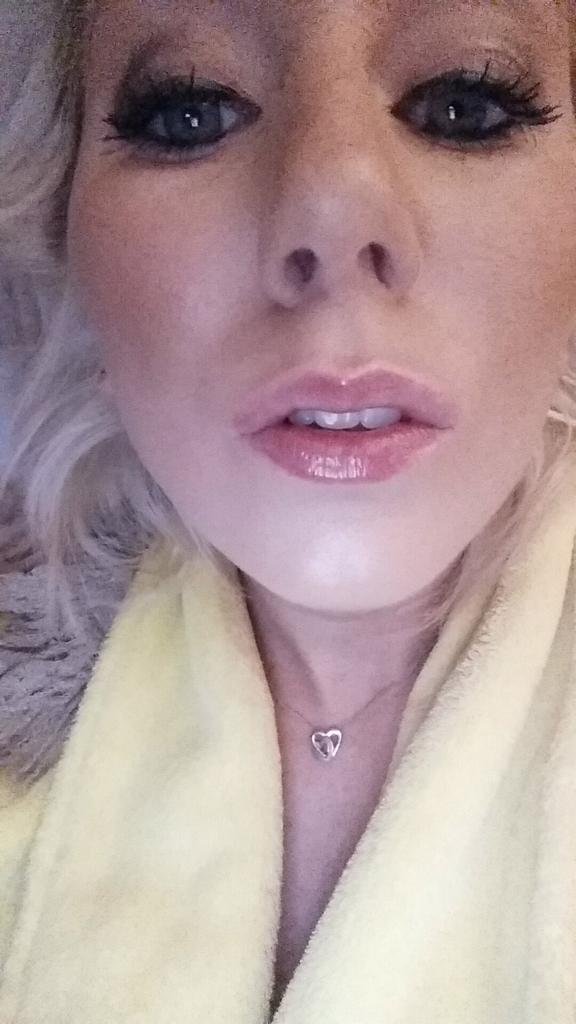 A swimwear model has revealed how a DIY lip job ended in disaster when she tried to emulate the fuller lips trend.

Unable to afford £200 ($300) injectable chemical fillers, part-time swimwear model and retail worker Gail Scott, from Salisbury in Wiltshire, was intrigued when she heard about yet another DIY version.

Gail had heard about a tool available online, which promises an enhanced look without injections.
Buyers suck into a lip shaped vessel to increase blood supply, temporarily giving the lips an artificial plumped look. Instead of spending £30 on the product, she used the lid of a mini hairspray bottle instead. After placing it over her lips, she sucked for five minutes until her lips started to tingle.

Initially she was delighted when she removed the lid to see her lips looked fuller. But minutes later she was left with painful bruising around her mouth that has left her unable to model since.

8The pop singer who sued for $1.2 million over botched lip implant surgery 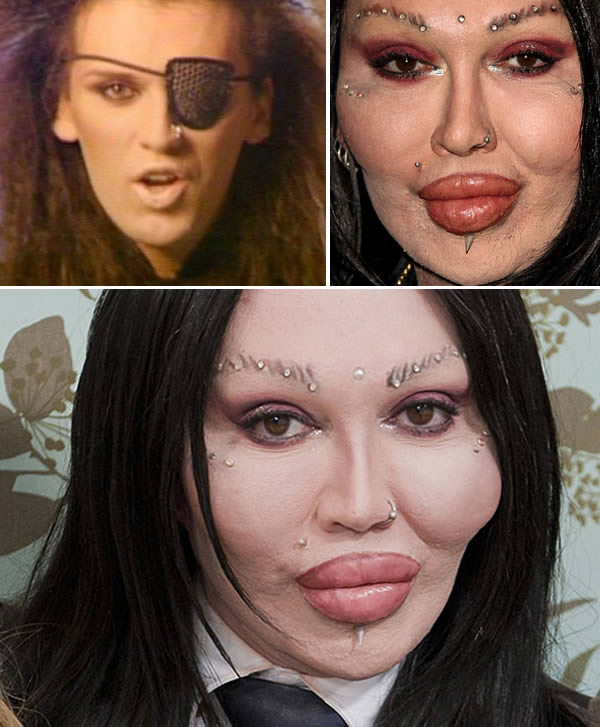 In 2007, pop star Pete Burns sued his plastic surgeon for "wrecking his career and life." Burns, singer for the 1980s pop band Dead or Alive, has had several cosmetic procedures on his face and sued a Harley Street surgeon for an estimated £1 million over a botched attempt to remove lip implants.

Burns said he looked like he had been "mutilated with a Stanley knife" after surgery to correct the original problems left his top lip hanging off. The singer, who re-surfaced in last year's Celebrity Big Brother, has had more than 100 operations by specialists in Italy to try to correct the damage. In 2009, he reached an out-of-court settlement for £450,000 (over $600,000) with cosmetic surgeon, Dr Maurizio Viel.