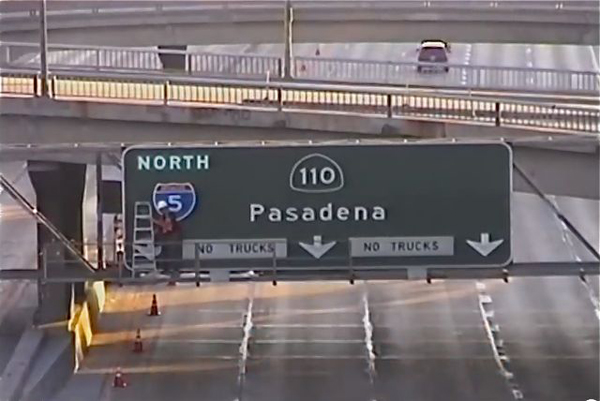 If you live in Los Angeles or at least have watched an episode of The Californians, you know that the LA freeway system can be incredibly confusing.

One especially irksome area was near downtown Los Angeles, where a crucial piece of signage was missing, causing many people, including artist Richard Ankrom, to get lost. But unlike other drivers who perhaps cursed and shrugged it off, Ankrom decided he would fix it. On August 5, 2001, after carefully creating an exact replica of a Caltrans sign, Ankrom snuck onto the overhead signage and hung it up. The new marker was so convincing (and necessary) when Caltrans found out about the project called “Guerrilla Public Service” they left it up. 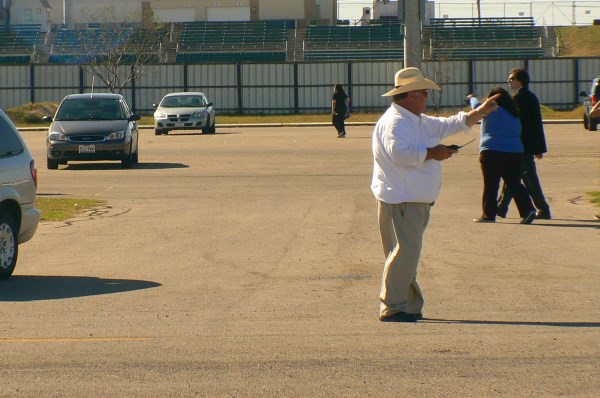 In Newark, New Jersey, when 4 traffic signals stopped working and the city wouldn't respond, citizens Ernest Manning and Luther Russell stepped in to save the day. Together, they directed traffic in what they consider one of the most dangerous corners in the area. Although several police officers drove through or looked on, it wasn't until more than 3 hours later a motorcycle cop took over and the light was fixed.

Meanwhile, back in California, a citizen who directed traffic when a light in South Pasadena went out was given a $193 ticket (but was later found not guilty). 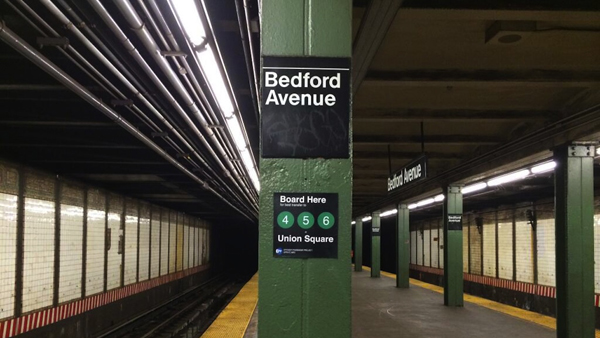 Meanwhile, in New York City, a group of rogue commuters decided to assist their fellow subway riders by adding signage to the MTA's “L” line. They called it the Efficient Passenger Project, and they hoped by adding official-looking signage they could help people board the subway car that was most efficient for transfers to a different line. They had plans to expand this signage to other lines, but the MTA, unlike Caltrans, was not so “chill.”

Officials felt the signs could cause crowding conditions and uneven loading, so they had them removed. 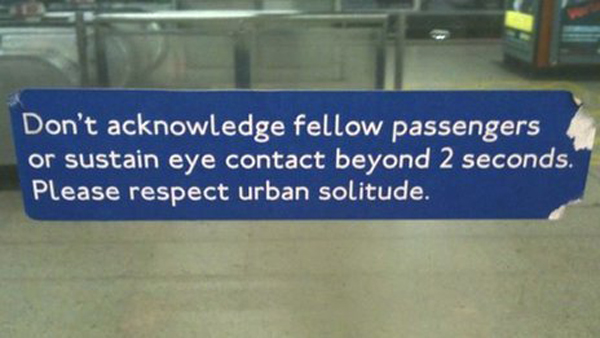 Riders of the London Underground have also put up their own signage as a public service. But instead of being helpful, their goal is often to get a laugh. They are made with the same colors and fonts as the official ones, but have messages like “Please offer this seat to those drunks less able to stand” or “No eye contact. Penalty £200.” Some of the stickers have been traced back to a website run by a man by the name of James who says they are a form of rebellion and represent freedom of expression. Over the past 10 years, one blogger has noticed more stickers appearing in the Underground and feels they are harmless fun, while the BTP calls them a blight on society. 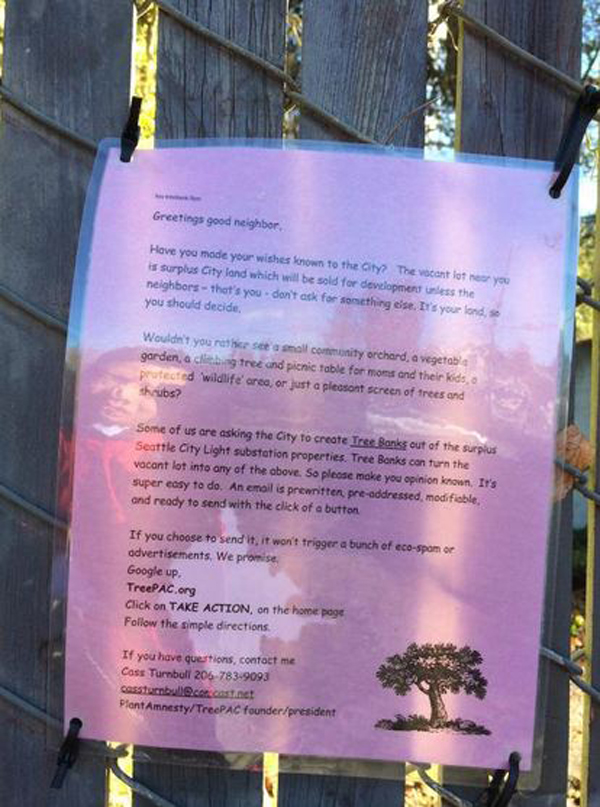 In Seattle, when locals found out the city's light company was going to sell some of its unused lots, some banded together to try and buy them. However, the prices started at over half a million dollars. But others, in an attempt to thwart development on these lands, have taken matters into their own hands by doing “drive-by plantings” and creating Tree Banks, in hopes to rally the community to oppose the sales. 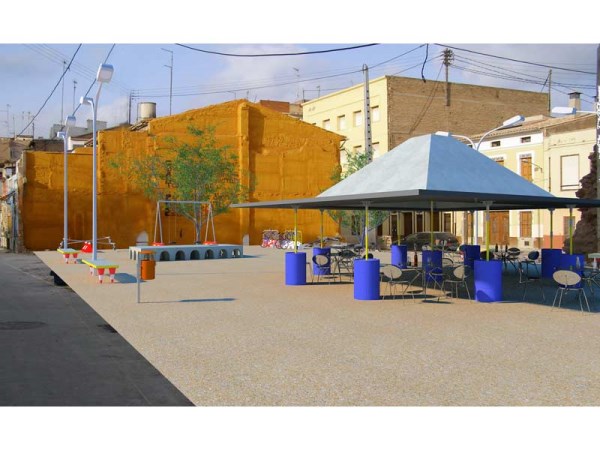 Santiago Cirugeda is an architect from Seville, Spain who is working to reclaim abandoned buildings and re-purpose them for the local communities. Due to the economic downturn, there is an estimated 500,000 half-built or abandoned structures all over Spain.

Occupying and self-building are technically illegal in Spain, so Cirugeda's projects often skirt the law. La Carpa, was a spider-like structure he built and turned into an mobile art center that had its own circus and tens of thousands of visitors before being closed in June 2014. He continues to butt heads with Spanish authorities as he works with architects and communities around the country. “Architecture should be cheap, functional and it should be an excuse to bring people together: and that's what we're doing,” he was quoted as saying. 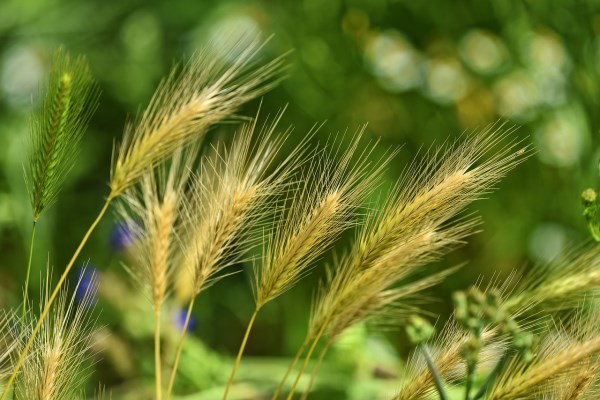 Richard Reynolds is credited with sparking a guerilla gardening movement in 2004 starting with a weed-filled plot outside his South London flat. From there, he moved on to other areas, often weeding and seeding after midnight (guerilla gardening is illegal). When others saw his renegade work, they too joined in, cleaning up roundabouts and pathways neglected by the landowners or the city. Now many of these plantings have become officially sanctioned by the city. 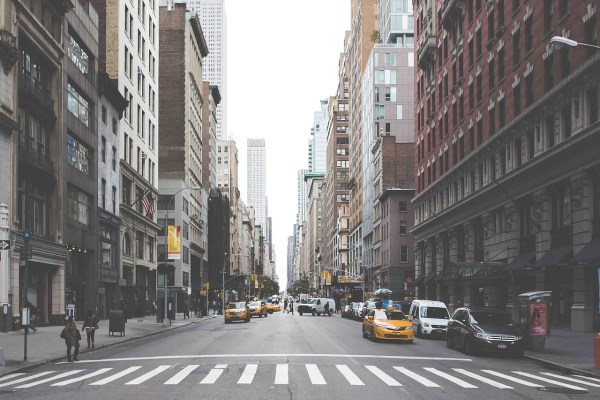 Anthony Cardenas of Vallejo, California was arrested for vandalism, but his crime wasn't tagging a building, it was putting in a crosswalk. Mr. Vallejo claimed to be trying to make his neighborhood's intersection safer after watching several accidents, and the city ignored his requests. He was bailed from jail by an anonymous donor and given a hero's welcome from the community, who also shared his safety concerns. Caltrans placed a cadet near the crosswalk until it was removed, warning pedestrians not to use it. 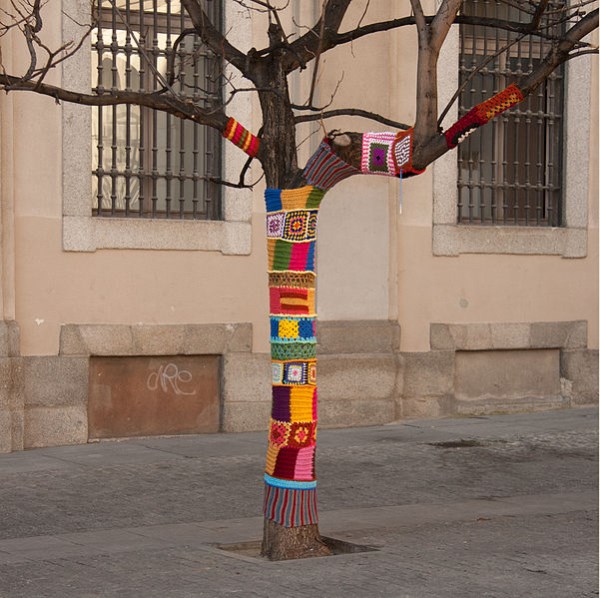 Yarn Bombing is one of the latest volleys in guerilla urban beautification. It was believed to have started with guerilla knitters around Texas looking for ways to utilize leftover wool, but it has morphed into an international movement of knitters, with some seeking to make political or social statements, and others to liven up public spaces or tell stories with temporary, colorful knitted art pieces. 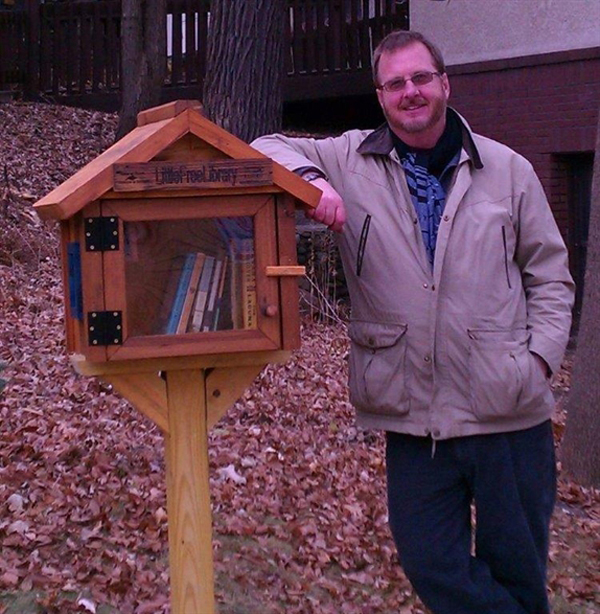 Todd Bol with a LFL

In memory of his schoolteacher mother, Tod Bol of Hudson Wisconsin built a little red schoolhouse out of wood. Then he filed it with books, and placed it on his lawn with the sign “Free Books." This sparked the idea to start Little Free Library, whose goal was to place tiny libraries just like it around the world, filled with books that anyone could borrow. By January 2014, there are almost 15,000 Little Free Libraries around the world which help promote community and literacy.