The houses on this list are still standing and have just one thing in common – all are grisly murder sites. While some are occupied, others are available for purchase. 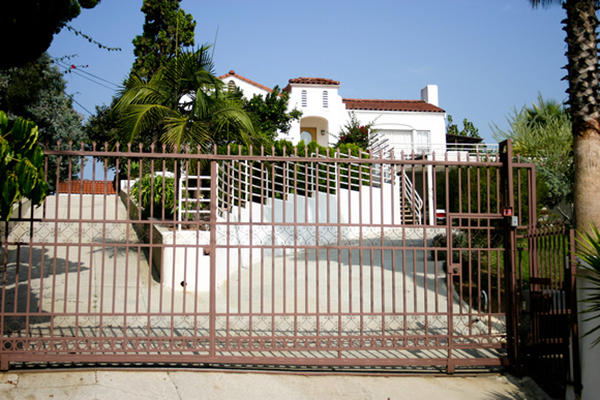 Most everyone knows the story of the 1969 Manson Family killings. In the Los Angeles area between August 8th and 10th, 1969, a small group of Charles Manson's most ardent followers brutally murdered five people at the Benedict Canyon home of director Roman Polanski. The night after, Manson, displeased at the sloppiness of the previous night's murders, joined his followers for a second night of murder and mayhem at the home of grocery store owner Leno LaBianca and his wife, Rosemary, in the Los Feliz area of L.A.

Over the years, both murder sites became morbid tourist attractions – the Cielo Drive house in Benedict Canyon was razed soon after Nine Inch Nails founder Trent Reznor recorded his hit album The Downward Spiral there in 1993, but the Labianca house still stands and has, for the most part, been occupied since. After the murders, a Filipino couple (rumored to be friends of Imelda Marcos) bought the LaBianca house. Over time, there have been some renovations; both a pool and carport have been added and the address has been changed from 3301 to 3311. The house was sold again in 1998 for $375,000. 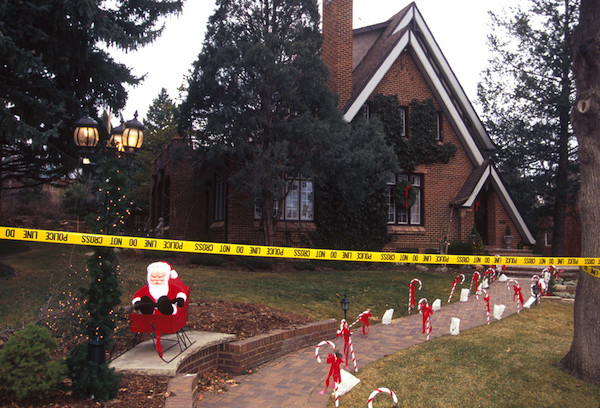 The Colorado home of Jon Benet Ramsey has been on the market for a while. In 2011, the property was put on the market for a sale price of $2.3 million, but no one bought it. In March 2014, the same owners lowered the listed price to $1.985 million in hopes someone would see the beauty of the home despite the tragedy that occurred there. (Six-year-old Jon Benet was murdered in her home. Her body was found in the basement about eight hours after she was reported missing during a police search of the home. She had been struck on the head and strangled. Her murder remains unsolved.)

Co-owner Carol Schuller Milner, the daughter of televangelist Robert Schuller, bought the long vacant property in 2004, but spent little time there as projects kept pulling her and her family back to California. They put it up for sale twice before 2011 and had no takers any of the times it was listed.

Milner says of the property: "Some people are making this a dark monument as opposed to thinking about the restoration that can occur after a tragedy. Death is not the last word, and God is not bound by death. I just don't believe it's in his character to abandon us, and that affects my ability to look at this house and see all the beautiful things about it." 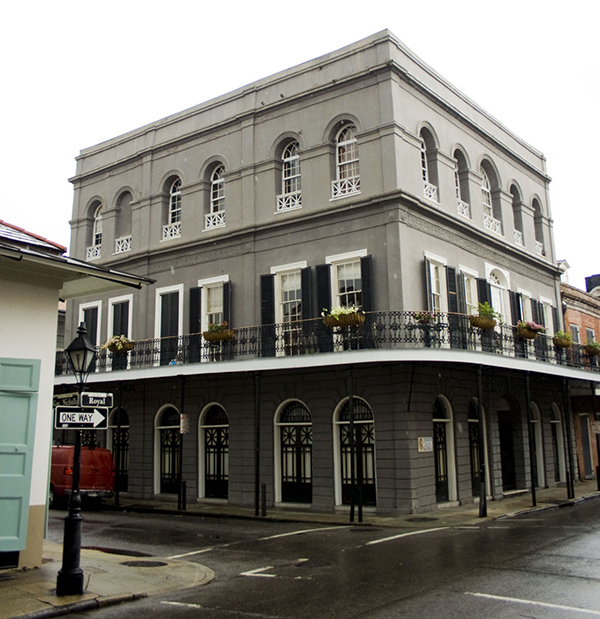 The LaLaurie Mansion was once home to Madame Delphine LaLaurie, a wealthy socialite and serial killer who routinely bound, starved, and tortured her slaves. Her murderous ways weren't discovered until a fire destroyed part of her home in 1834. LaLaurie fled New Orleans during the mob violence that followed the fire and landed in Paris, where she died in 1849.

The house, badly damaged from the fire, was restored by 1888 and has at times been used as a public high school, a conservatory of music, a tenement, a refuge for young delinquents, a bar, a furniture store, and a luxury apartment building.

In 2007, the home was purchased by actor Nicolas Cage for $3.45 million, but fell into foreclosure and was and sold to Regions Financial Corporation for $2.3 million. The home was bought by Michael Whalen, an energy trader in Houston in 2010, who had it restored to its former glory. Although it remains a favorite stop on ghost tours in the French Quarter, the rumored paranormal activity at the residence seems to have quieted since the renovation. 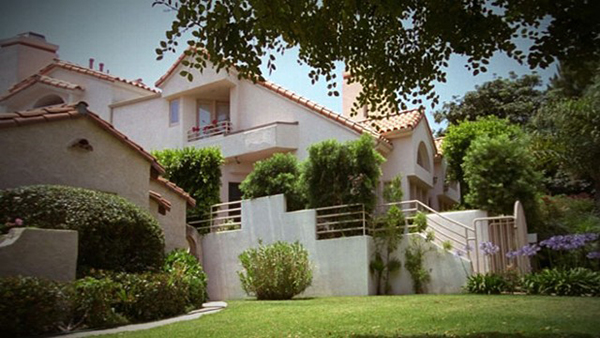 The four-bedroom Brentwood, California home where Nicole Brown Simpson (ex-wife of O.J. Simpson) and friend Ronald Goldman were murdered still stands and is currently occupied, but it was a hard sell in the years after the still unsolved murders.

Current residents still have to contend with tourists, the curious and the media, all of which still flock to the site, two decades after the event. 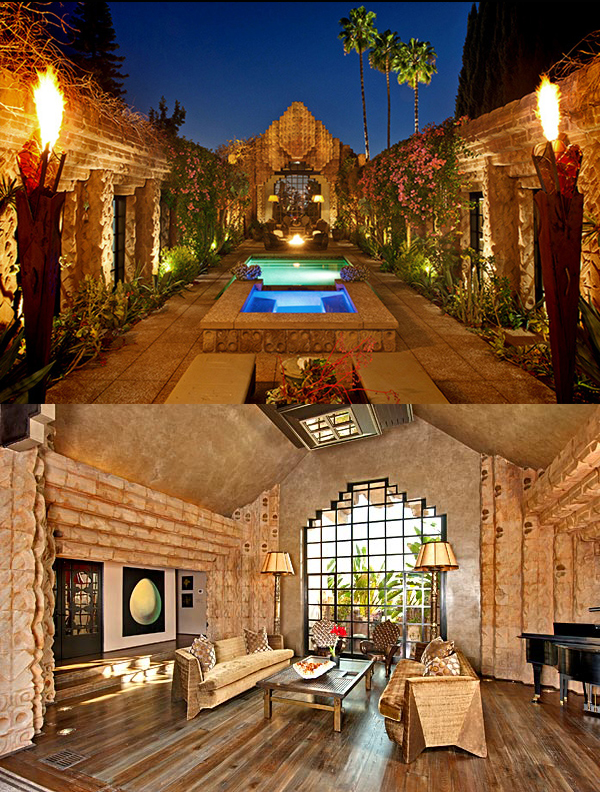 Even if Los Angeles' Sowden House plays a part in the shocking and still-unsolved Black Dahlia murder, we cannot overlook its unique beauty.

The house, located in the Los Feliz area of Los Angeles (not too far from the LaBianca house), was built by Lloyd Wright (eldest son of Frank Lloyd Wright) in 1926. The Mayan-like structure features seven bedrooms, four baths, and was listed on the market at $1.6 million in 2001. It was purchased for $1.2 million and an additional $1.6 million was spent in renovations.

From 1945 through 1951, the house was owned by Dr. George Hodel, a Los Angeles physician who was a prime suspect in the infamous Black Dahlia murder, though he was not directly named as such at the time. His son, Steve, a former LAPD homicide detective, claimed in his 2003 book Black Dahlia Avenger that the Dahlia, Elizabeth Short, was tortured, murdered and dissected by his father inside of the Sowden House, in January 1947.

In recent years, a police cadaver dog and subsequent soil analysis tests conducted by forensic anthropologist Dr. Arpad Vass, confirmed that soil samples from the rear of the Sowden House were "specific for human remains."

The house, which is on the National Register of Historic Places, is currently on the market for $4.8 million. 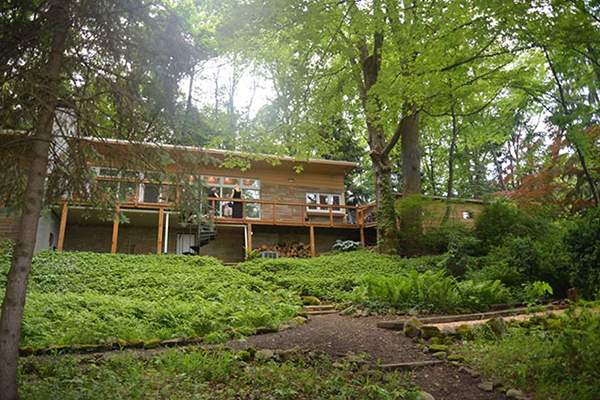 As of August 2014, the childhood home of serial murder Jeffrey Dahmer was still on the market after being listed six months earlier.

The mid-century modern house which rests in a wooded area along West Bath Road in Bath Township, Ohio is currently owned by Chris Butler, a man tied to '80s pop culture as a songwriter / guitarist for The Waitresses. The band is best known for the hit song "I Know What Boys Like."

The 2,170-square-feet house has three bedrooms and three bathrooms and is priced at $295,000. Realtor Rich Lubinski of Stouffer Reality Inc. says that while the house may be a tough sell, its not impossible. He says, "this house never killed anyone."

It was here Dahmer murdered his first victim, Steven Hicks, in 1978. Hicks' remains were scattered outside the house. Dahmer was arrested in 1991 and confessed to killing 17 young men and boys since 1978. He was killed in 1994 in prison by another inmate.

In 2008, a listing for a two-bed/two-bath rental nestled in a highly desirable area in Laurel Canyon and priced at $3000 a month appeared on Craigslist.

At the time, the residence was a notorious drug den and its inhabitants – Joy Audrey Gold Miller, her live-in boyfriend William Raymond "Billy" DeVerell, David Lind, and the gang's leader, Ronnie Lee "Ron" Launius – were part of the Wonderland Gang, a group of drug dealers involved in the Los Angeles cocaine trade during the late 1970s and early 1980s. Holmes was a frequent visitor to Wonderland Avenue and would purchase or scrounge cocaine from the Gang.

Holmes and the gang conspired to rob Eddie Nash, a reputedly powerful organized crime figure in the Los Angeles area. The brutal home invasion was an inside job set up by Holmes, who was friends with Nash. Nash was threatened and his bodyguard was shot in the back during the incident.

It was lucrative haul for the Gang, as they made off with more than $1,200,000 worth of cocaine, heroin, quaaludes, cash, antique guns, and jewelry, but that victory was short lived. Nash retailed and his henchmen (including Holmes) went to the Wonderland Avenue residence and bludgeoned the gang to death with hammers and lead pipes.

The exterior of the house was used in the 2003 film Wonderland and the house has also been a frequent stop on Hollywood murder tours.

On August 20, 1989, privileged brothers 21-year-old Lyle and 18-year-old Erik Menendez gunned down their parents in their Beverly Hills mansion. Entertainment executive Jose Menendez was shot in the head at point-blank range. The boys' mother, Kitty, was shot multiple times while trying to escape.

The brothers admitted to having committed the murders, but claimed to have been victims of abuse. The jury thought otherwise, and eventually found them guilty of first-degree murder and conspiracy to commit murder.

The Elm Drive house where the crimes occurred has been sold twice since the murders – first in 1993 to mystery television writer William Link, and then in 2001 to a telecommunications executive named Sam Delug. In 2002, major renovations occurred at the home, but the exteriors looks generally the same. (Note the "Grim Reaper" Halloween decorations from 2006!) 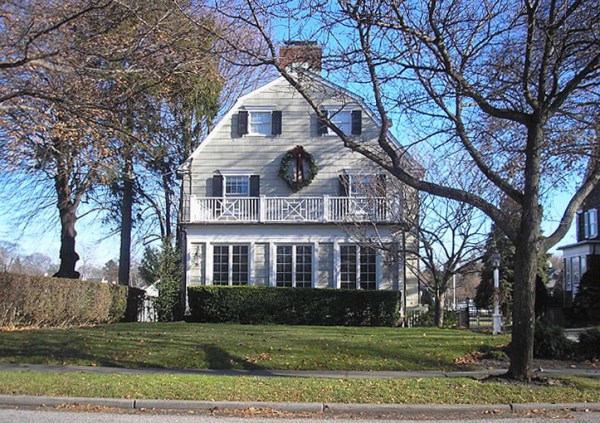 The house at 112 Ocean Avenue has been a thorn in the side of Amityville locals for many years – not because of the 1974 murders of the DeFeo family by eldest son Ronald, or the subsequent book about the home's hauntings by former residents the Lutz family, but because of the endless stream of tourists that continue to visit the site.

Since The Amityville Horror was released in 1979, the site has seen more than its share of thrillseekers, paranormalists and true crime aficionados, but Amityville town officials and local residents are unhappy with the attention that the book and movies bring to the area and tend to decline requests to discuss it publicly.

As for the house itself, it has undergone restoration and an address change to deter visitors. The famous quarter round windows have been removed, and the place looks considerably different from its depiction in the films. (For the 2005 film version, the house was renamed 412 Ocean Avenue.)

The house was put on the market in 2010 with an asking price of $1.5 million, and it was eventually purchased for $995,000. When the departing owner had a moving sale at the house, hundreds of people turned up and were allowed inside, but were not to visit the upstairs rooms or the basement. 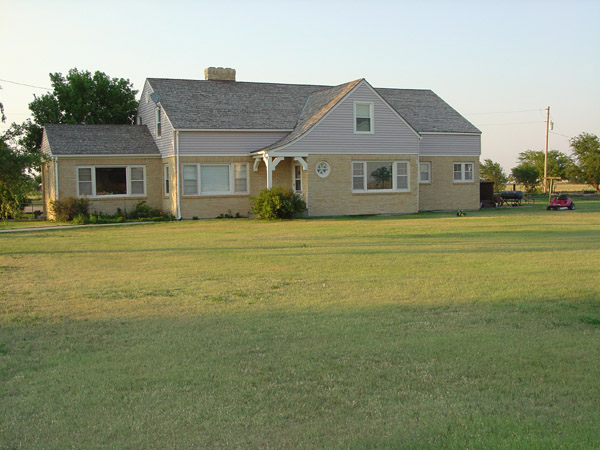 A house at the center of four brutal murders sits at the end of Oak Avenue on 7 acres of pastoral farmland in Holcomb, Kansas.

In November 1959, 4 members of the Clutter family were murdered by two criminally-minded drifters, Richard “Dick” Hickock and Perry Edward Smith. The men heard rumors that Herb Clutter was a wealthy farmer who kept $10,000 hidden inside his house. Once inside, the pair became enraged when they did not find the money, and ended up shooting/slashing Herb Clutter, his wife Bonnie, and their 2 youngest children Nancy, 16, and Kenyon, 15.

Weeks after the event, the pair were found and arrested after a jailhouse snitch revealed their identities and both were hanged on April 14, 1965.

The Clutter family, Hickock and Smith became known worldwide after Truman Capote's book, In Cold Blood, was released. The house was purchased in 1964 by a cattle rancher named Bob Byrd. A movie of the same name followed in 1967, and was filmed inside the house with permission from Byrd.

In 1990, Leonard and Donna Mader purchased the house from two of Byrd's relatives who lived there after his death. In 2006, fed up with all the visits from true crime enthusiasts, they put the home up for auction, but failed to find a bidder. The home is presumed to still be owned by the Mader family.

Rumors also persist that the house is haunted by the ghost of Nancy Clutter – the teenage daughter of Herb Clutter – but the current owners claim no paranormal activity takes place there.