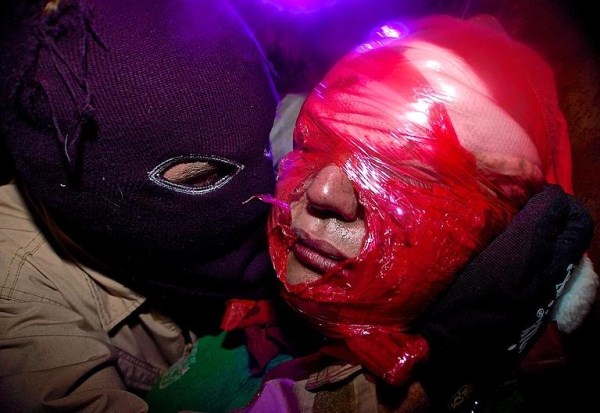 Quite possibly the world's scariest haunted house and easily the most exclusive, San Diego's McKamey Manor has a waiting list of 24,000 people, which makes sense when you consider that only two people are allowed inside at once and each experience lasts up to eight hours. Entrants must go through a background check before entering then sign a waiver and, as of yet, no one has actually completed the experience in its entirety. Even if someone managed to go through the waiting list twice, hoping to complete the haunt with the help of their past experience, they would soon find their previous knowledge does them no good as no two visits are ever the same.

Due to the popularity and exclusivity of the attraction, McKamey Manor operates year round -with a new theme changing the experience every year. So far, participants have been tied up and gagged, had snakes dumped on their head, eaten raw eggs, been waterboarded, covered in blood, threatened with power tools and stuffed into an ice box. Essentially, the goal of McKamey Manor is to make you feel like you're living in your own private horror movie, so be prepared to suffer from PTSD after you leave. 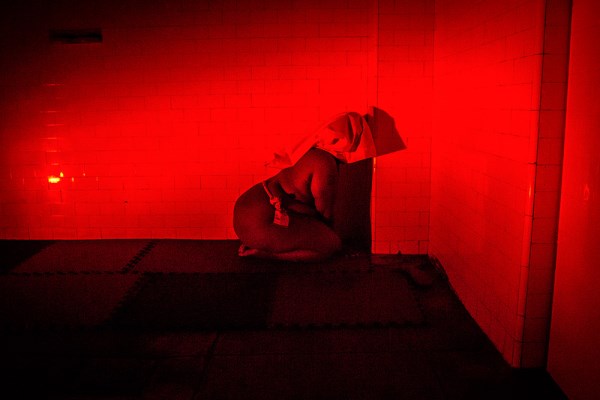 One of the most sexually-threatening haunts around, visitors at this horrorfest have been forced to walk barefoot on a floor covered in wet condoms, waterboarded, touched all over by unseen hands in a pitch-black hallway, pinned to the ground by an unknown assailant, forced into a corner while a plastic bag was tied over their head, subject to an (empty) staplegun being used on their face, made to lay on a dirty mattress next to a gory naked woman while a naked man rubbed his face on their feet, forced to eat a tampon that a woman appeared to take out right there, rolled naked in a sheet of plastic and abducted in a white, creepy van. To enter, you must sign a waiver and you must agree to wear a protective surgical mask the whole time. Also, you will go through the experience completely alone.

Blackout operates in New York, Los Angeles and Chicago, so if you want to check it out, you have a few options to minimize your travel time. 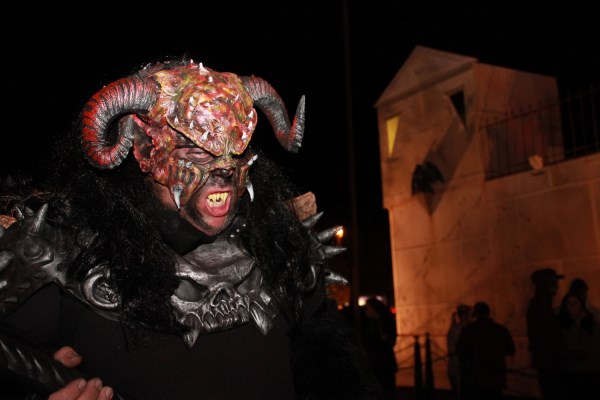 During one of Las Vegas' Freakling Bros Horror Shows, visitors can be subject to violence sexual undertones and electric shock. All entrants must sign a waiver and be over 18 years old for the only rated R haunt in Nevada.

In 2013, visitors could be kidnapped, knocked over, dragged along the floor, thrown over their abductor's shoulders, artificially drowned, shoved into a locker, shocked, asked to swing over a seemingly bottomless pit, and put before a firing squad. The company even hires professional wrestlers to ensure even the biggest guests can be picked up and tossed around. Even the line was creepy as a fire-breathing clown nibbled on the ears of people waiting. Only around 30% of visitors made it through the attraction all the way. 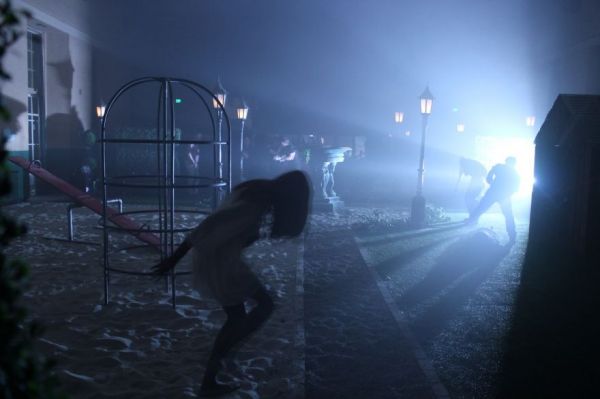 Every year, Blumhouse Productions (the same company responsible for The Purge, Sinister, Insidious, Paranormal Activity and related sequels) rents out a space in Los Angeles and puts on an elaborate and totally immersive horror experience for Halloween. Unlike many of the other immersive haunts on this list, the actors won't hit you or pick you up, though they do touch you lightly to guide you and help sell the storyline.

The experience changes every year, but if has "The Purge" in the title, you can be assured it will be related to the storyline of the film series with the same name. I experienced the 2013 attraction and was quite impressed (you can read a full walkthrough here). Of course, with six floors and 700,000 square feet of space, there was plenty to experience, including a creepy birthing scene, an execution and a broken elevator. The cohesive storyline was interesting and the way the actors get each person in your group to participate directly in the action really made the surprises that much more scary. 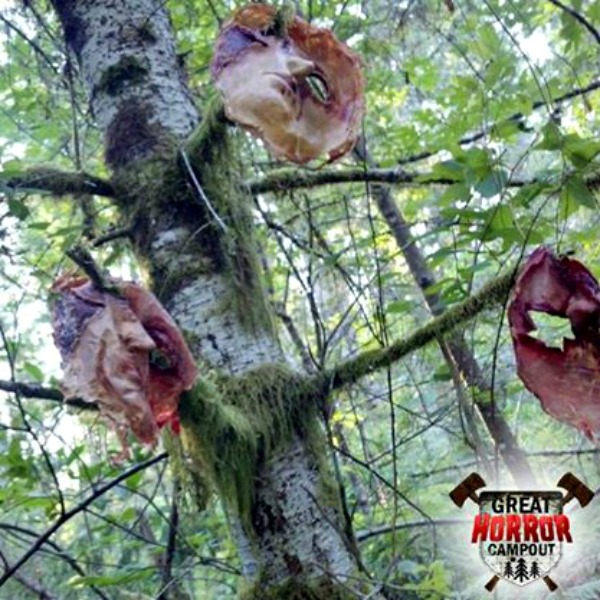 The 12-hour adventure involves camping out in the middle of the woods and enjoying a nightmarish camping trip like you've seen in so many movies. The setup allows guests to choose their own level of danger so you can be terrified out of your mind or just a little spooked. If you choose to participate in the Hell Hunt, you'll be competing for the title of "Hellmaster" by performing voodoo rituals, uncovering secret passwords and more.
Best of all, this freak show began touring last summer -starting with locations on the West Coast and Texas, and chances are they'll spread out even further east in the upcoming summer. 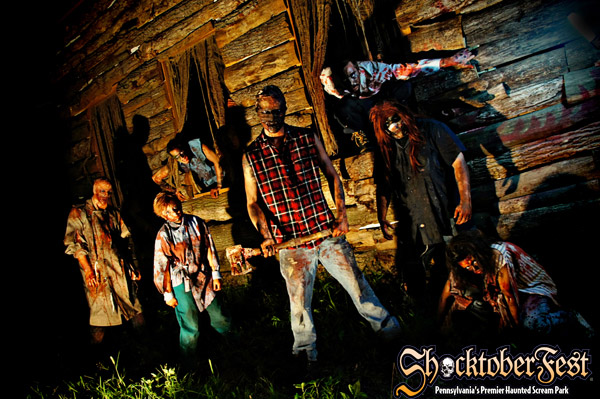 Located in Sinking Spring, PA, Shocktoberfest is most famous for its Naked and Scared challenge, where participants go through their Unknown attraction in nothing but their underwear, increasing the guest's feeling of venerability. The haunt also offers some other interactive experiences that may not be as famous, but are still cool.

The Zombie Revenge Paintball Hayride gives you the chance to fight off zombies with a paintball gun in a "zoo," sort of like Jurassic Park.

For a more up-close experience, the Zombie Night Run gives you the chance to run away from zombies with a flag football belt representing your brain, heart and entrails. The zombies can eat your organs as you run by. There's even a one-night mud run that makes the challenge even more difficult.

Finally, there's the Prison of the Dead, which reviewers seem to agree is the best of the bunch. The attraction starts with a real prison bus that takes you to the condemned Willow Glen State Penitentiary, which is said to be closed after inhumane torture of the prisoners was made public. Before the prisoners were transferred out of the prison, the warden carried out the largest mass-murder in history leaving everyone inside the prison (including the guards) dead. Beware the vengeful spirits of angry prisoners and betrayed guards as you crawl through wet metal tubes in a desperate escape attempt the actors who will grab at you and block your path throughout the maze. 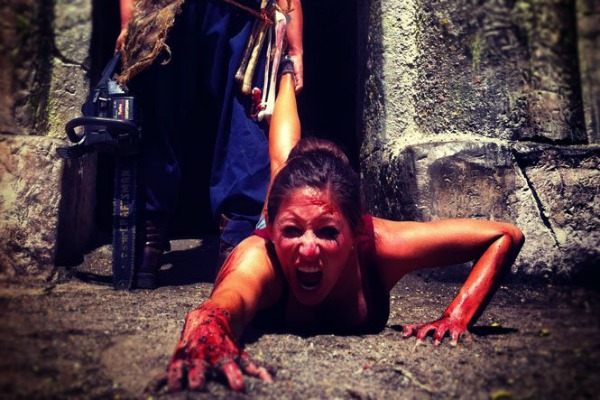 Want to fight back against those attacking you? Then head to LA's Haunted Hollywood Sports where you can shoot monsters with airsoft or paintball guns in either the Zombie Killhouse or the Cajun-themed Voodoo Killhouse. You're immersed in a full storyline and then armed so you can protect yourself from monsters. There's also a Shoothouse where you can protect your safehouse from a zombie hoard intending to feed on your flesh. 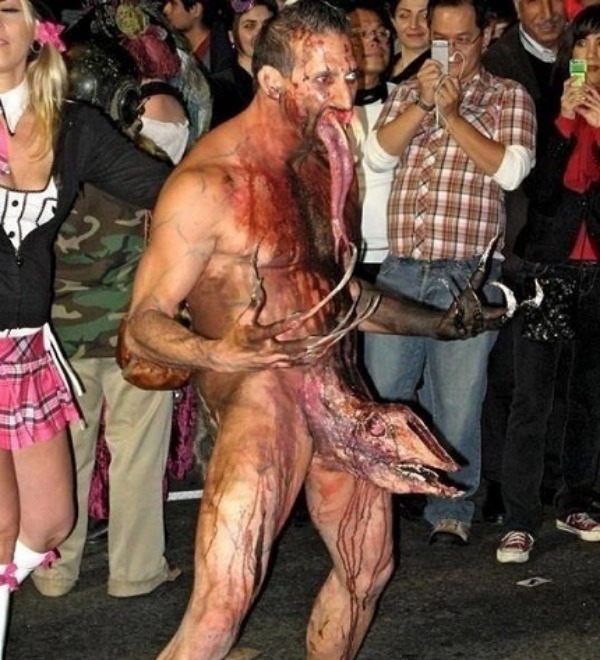 With over 500,000 square feet of space, Ohio's Haunted Hoochie has plenty of exciting surprises at every turn. Treats include shooting demons with paintball guns, being attacked by a man with a chainsaw, getting picked up and thrown over the shoulder of an abductor and witnessing the birth of a demon baby.