1"Babylon is the world's leading dictionary and translation software" 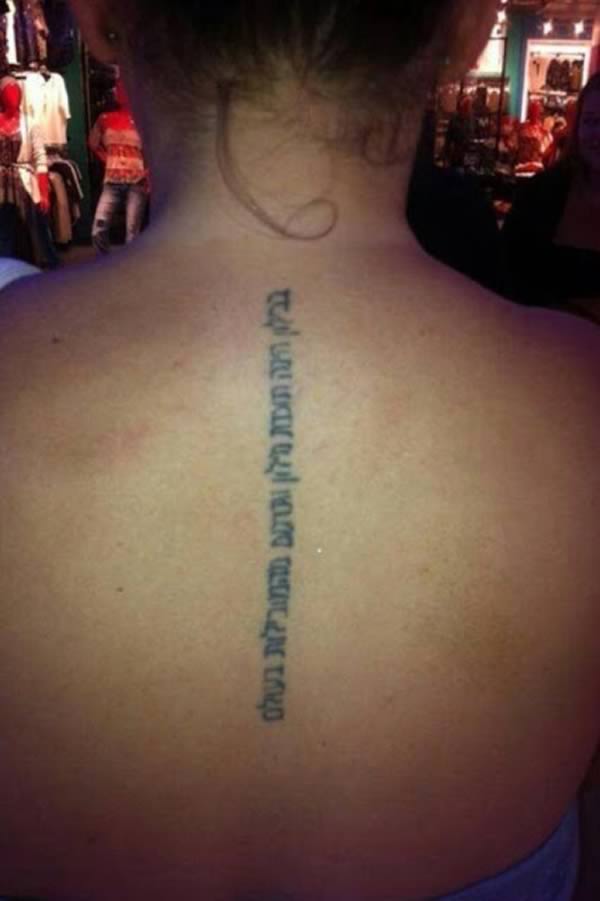 What does this Hebrew Tattoo read?

"Babylon is the world's leading dictionary and translation software" 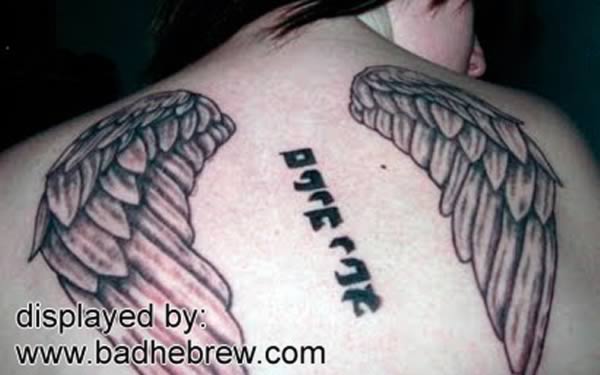 This poor girl wanted her Hebrew tattoo to say a spiritual "I am free." She got her Hebrew backwards, but that's the least of her troubles. This unfortunate creation actually says "I'm for free". Really, this Hebrew tattoo beats any tramp stamp hands down!

3"You shall not tattoo" 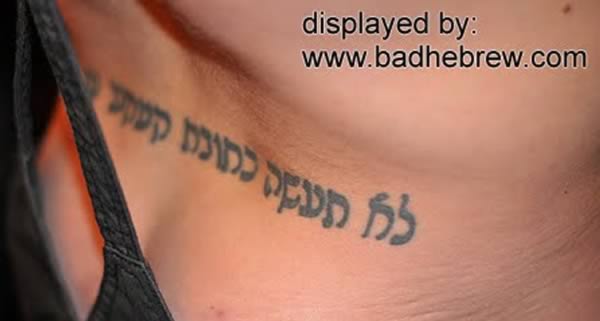 On the website where this picture was originally posted, it was labeled as "Honor thy Father and Mother." In reality, it says no such thing. This Hebrew tattoo in fact says: "You shall not tattoo," and it's written in Rashi Script of all things – an old Hebrew script used to write comments in religious texts. 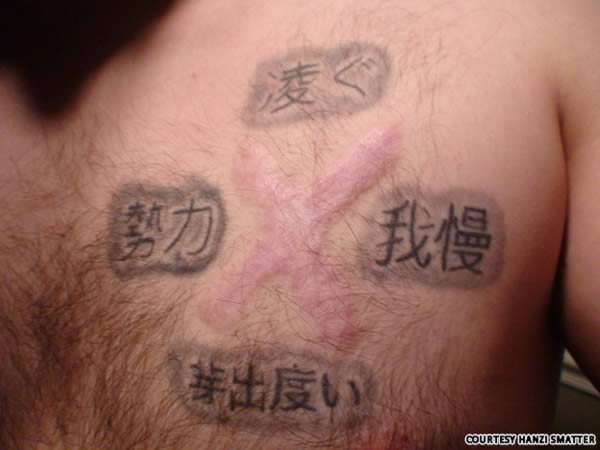 Tian, an Arizona-based amateur linguist, runs the Hanzi Smatter blog, a site dedicated to Asian language tattoos gone wrong. Tian translates Chinese tattoos for people who probably should have sought him out, or any Chinese-speaking friend, before getting their flesh indelibly inscribed.

In this case, this tattoo translates to: “I am slow." What the owner thought it meant: "To excel;" "Strength;" "To persevere;" "To find happiness."

5"I married a moron" 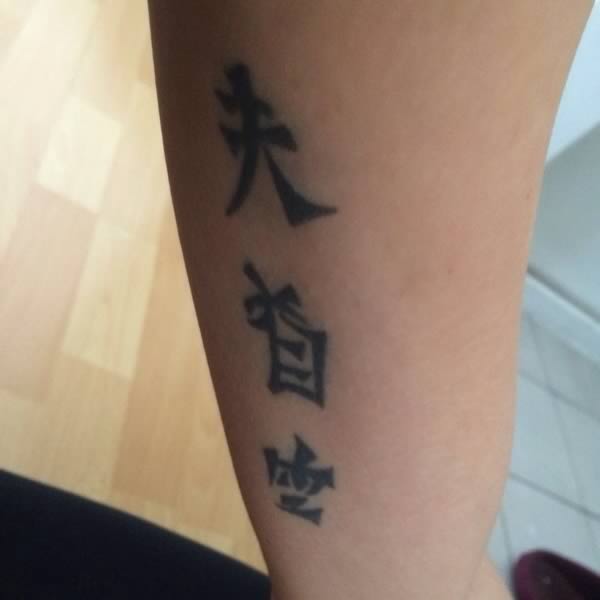 A man wrote Hanzi wondering what his girfriend's tattoo meant. I'm sure he wasn't happy with the answer: ? (man/husband), ? (head/neck), ? (empty/void) = "I married a moron." 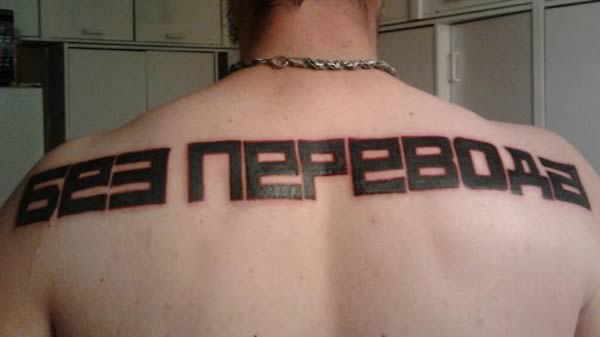 This guy tried to translate his last name to Russian using Google translate.. instead of "Botrokoff" it says "no translation." 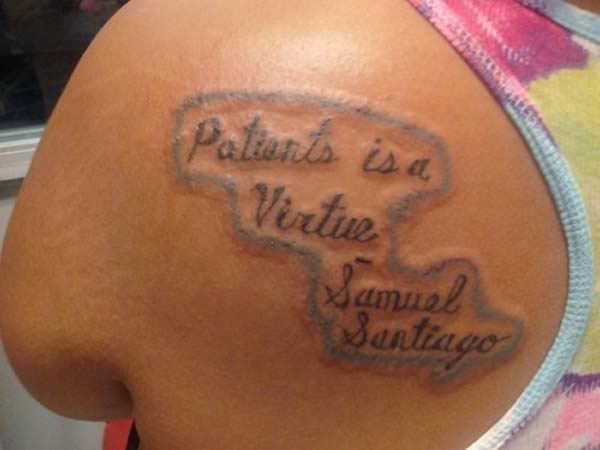 Patients are a virtue for doctors, indeed. (In Spanish, "patients" and "patience" are homonyms).

8”It swims happens by chance” 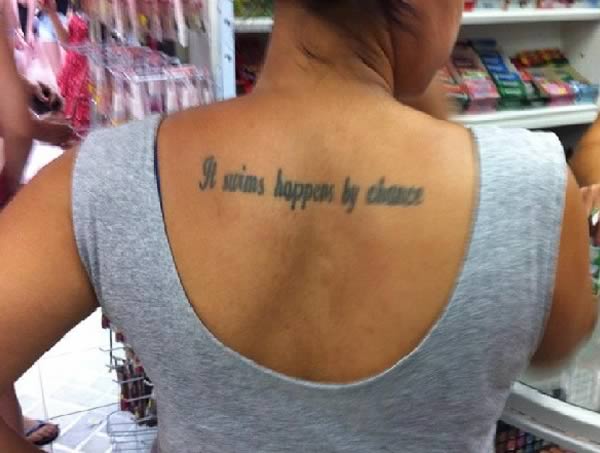 It could be said that tattoos are the ultimate form of self-expression — permanent markings meant to reflect an individual's artistic tastes or a way to share their favorite mantras and words to live by.

For the Brazilian lady above, that bit of ageless wisdom just so happens to be: ”It swims happens by chance.”

Deep? Not so much.

If you're confused as to what the tattoo means, chalk it up to a bit of bad translation. As it turns out, the Portuguese word nada (nothing), is a homonym with the third-person conjugation of nadar (to swim) — leading the phrase “Nada acontece por acaso” (Nothing happens by chance) to be irreversibly inked as something markedly less meaningful.

9As who am I wearing away for myself, I only set (it) down for/on myself, strong man (that I am)?"

Here stands the shoulder of Danielle Lloyd, a "celebrity" who has sought to bring the prestige of a Latin tattoo to her body, alongside a unique (i.e., meaningless) Hebraic tattoo. Her press release told journalists that her tattoo meant: "To diminish me will only make me stronger." Alas, only one word is correct, namely "only": tantum. The actual "meaning" is: "As who am I wearing away for myself, I only set (it) down for/on myself, strong man (that I am)?" 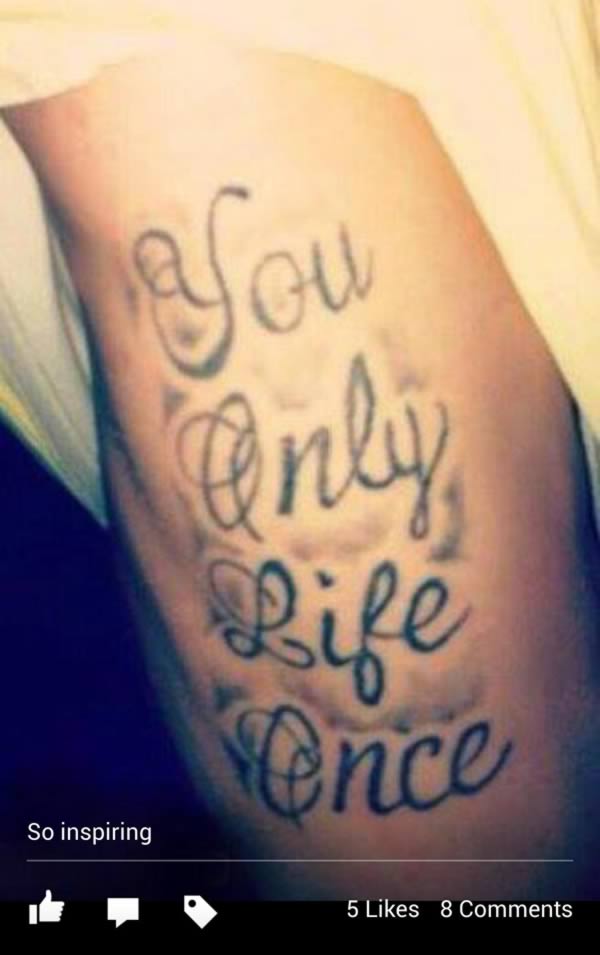 This foreign girl didn't know what YOLO really stands for.

This teenager paid £90 to have his arm tattooed with Chinese characters. He got a shock when he learned the message read: "At the end of the day, this is an ugly boy."

Hairdresser Lee Becks thought he had Mandarin for "love, honor and obey" etched into his skin. The 18-year-old found out that he had been tricked when he saw the effect it had on a woman serving at a Chinese take-away.

"At first, she said something about me making people laugh and talked about a crown," he said.
"But then I realized she was really saying clown, not crown. The young woman blushed and was very reluctant to translate for me. Then she admitted what it really said."

A "totally mortified" Mr. Becks went back to the tattoo parlor in Southend, the next day - only to find it had closed. He added: "I suspect the tattooist knew he was closing and just wanted to get his own back for some reason. I always wanted a tattoo and the design looked great. Now I am stuck with it but have to keep it covered up."

When he dared show off his arm at a nightclub, a group of Chinese girls came up - and burst out laughing. Even his friends have been finding it hard to keep straight faces. 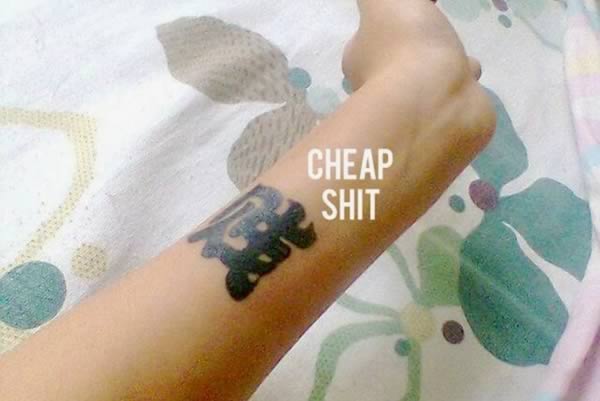