We've all heard the expression “You don't know what you've got until you lose it.” You could say the same thing about comic book characters —  Superman has been around since 1938, and Batman is currently celebrating his 75th anniversary. So, what's a good “career move” for a character who has fought countless fights and has gotten out of every predicament? Kill the character!

In July 2014, the publishers of Archie announced they would kill off 73-year-old Archie Andrews, making the perpetual teenager the latest comic casualty.

People take their comic book characters seriously — many of their deaths have been unexpected, causing outrage and anger among fans. But don't get too bent out of shape — nobody stays dead in comic books.

1The X-Man who killed 5 billion people 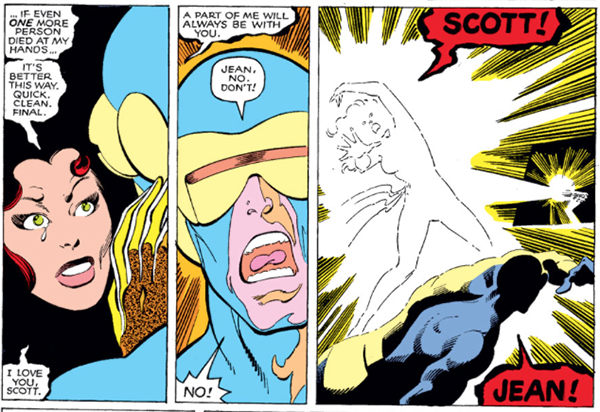 The X-Men are comicdom's favorite mutants. Perhaps the comic book death that caused the most furor was the passing of a founding member of the X-Men, Jean Grey (who was originally named Marvel Girl, but later became Phoenix.) Grey became Phoenix while saving the other X-Men as she took control of a crashing space shuttle in Uncanny X-Men #101 and emerged from the water as an extremely powerful being.

During the classic Dark Phoenix saga, Grey's powers got the best of her as she struggled to contain the power of the Phoenix force. She eventually became Dark Phoenix and ended up destroying a star in a distant, inhabited solar system and killed over 5 billion people.

Momentarily free from the grip of Dark Phoenix, Jean Grey committed suicide in front of the love of her life, Scott Summers/Cyclops, in the landmark issue of Uncanny X-Men #137. The third X-Men film,X-Men: The Last Stand, was loosely based on the Dark Phoenix saga but with Wolverine instead of Cyclops as Grey's love interest. (More Hugh Jackman screentime?) Grey dies at the hands of Wolverine's adamantium claws in the film.

Grey eventually did make a return in the Avengers series years later. It was explained that the real Grey was never actually Phoenix. While Jean Grey was in a cocoon, the Phoenix Force took her place and was so convinced it was the real Jean, it even had taken on her sense of morals and personality when it came to sacrificing her life.

2Did Spider-Man kill his girlfriend?

In 1965, Marvel Comics' big daddy Stan Lee created a love interest for Spider-Man (Peter Parker) to rival his sassy redheaded love interest, Mary Jane Watson — Gwen Stacy. For nearly 100 issues, Parker had an on and off again relationship with the blonde-haired Stacy.

When writer Gerry Conway took over the writing duties on Amazing Spider-Man, he wanted to ditch Stacy. Some said that he wanted to get rid of the character in retaliation.

Much to the shock of readers, Gwen Stacy died in 1973 in The Death of Gwen Stacy. High atop a bridge in New York, while Spider-Man tussles with his arch-foe The Green Goblin, the villain's flying machine hits Stacy and knocks her into a free-fall. Just before Gwen hits the ground, Spidey's webbing catches her, but a “Snap!" also accompanies the comic panel as Spider-Man pulls her up. He whispers, “I saved you,” but soon discovers she's dead. Goblin flies over and shouts, “Romantic idiot! She was dead before your webbing reached her! A fall from that height would kill anyone before they struck the ground!”

The debate has raged ever since. Did the Green Goblin kill Gwen Stacy or did Spider-Man kill her by accidentally breaking her neck?

You can't kill a great story, however. The death of Gwen Stacy was a major part of 2014's Amazing Spider-Man 2 plotline.

The Flash's arrival in comic books sparked its Silver Age, which resulted in the revamping of characters like Green Lantern and the Justice League. The Justice League inspired Stan Lee and Jack Kirby to create the Fantastic Four, which led to the creation of countless characters in Marvel Comics including the Avengers, Spider-Man, the X-Men, the Hulk... ah, you get the point. By 1985, there were so many alternate realities, DC decided to start fresh by getting rid of some of them. Thus, the wildly popular Crisis On Infinite Earths was born, starring nearly every character in the DC universe.

Hot on the heels of Supergirl's death, Barry Allen/Flash dies while protecting Earth in a fight with the time-erasing Anti-Monitor. This was a big deal, folks. Barry's Flash was one of DC's greatest superheroes just under the pantheon of Superman, Batman, and Wonder Woman. In the wake of Barry's death, Kid Flash (Wally West) takes up the mantle of being the Flash. (What's even more shocking is that Barry remained dead for 20 years! In comic book years, that's a lifetime.)

Barry Allen is the Flash again and has stayed that way even through the company's New 52 revamp. 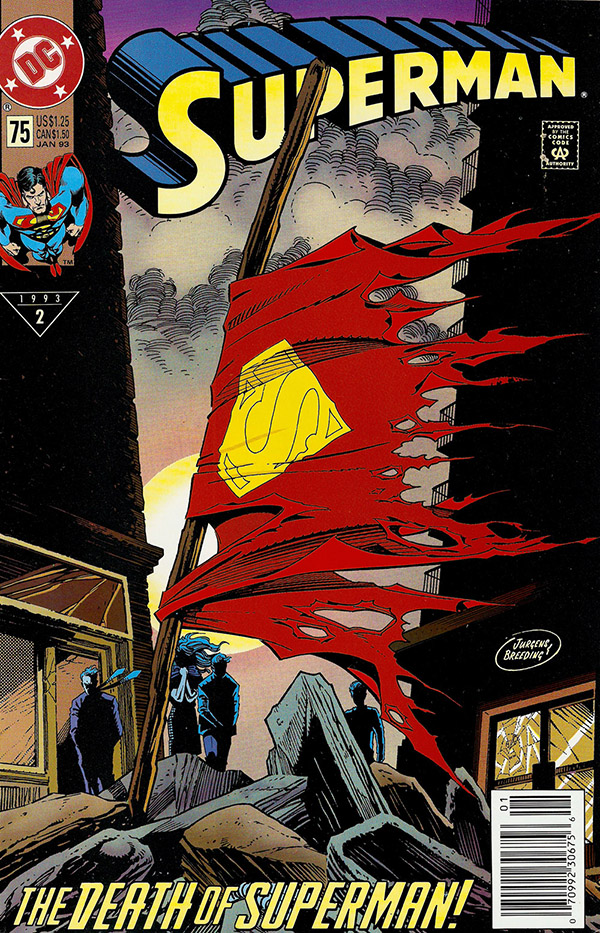 After the events of Infinite Crisis, DC relaunched the Superman mythos in 1986. By the 1990s, the popularity of comic books once again surged with the help of the X-men reboot.

In Superman #75, it seemed The Man of Steel had met his match. He fought the seemingly unstoppable war machine known as Doomsday. With each opponent not holding their punches, both died pretty much at the same time, with Superman passing in Lois Lane's arms.

You can't keep the oldest and most iconic comic book character down for long, though! The one, true Superman returned to comics after recovering in the Fortress of Solitude, stronger than ever and sporting longer hair. (He didn't cut his hair until just before he married Lois Lane.)

Superman #75 garnered extensive media coverage. The issue,— which included a black armband — was a massive success, selling between 2.5 and 3 million copies. 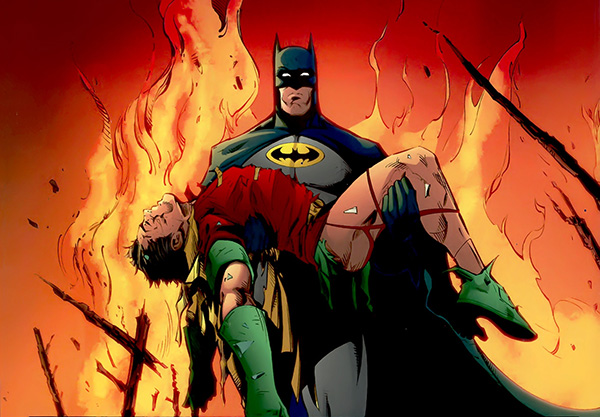 It's just not the same if you have peanut butter without jelly, Garfunkel without Simon and, most of all, Batman without Robin.

After years of being Batman's original Robin, Dick Grayson grew up and flew the coop, so to speak. Batman trained a new lad by the name of Jason Todd to become the second Robin. Apparently, this new Robin had a short fuse and in a fight against Two-Face, tried to strangle him.

Todd's overall mood swings and violent behavior didn't go down with the readers too well, and in 1988, DC decided it was time for the Batman to fly solo again. The comic book company made one of their most widely publicized and controversial decisions: a 1-900 phone number was used to decide if Jason Todd should live or die. Fans voted for Jason's demise by a small 50.34% majority in a vote of 5,343 to 5,271.

At the hands of the Joker, Jason Todd bit the dust. Or did he? In 2002, during the Hush storyline, Robin III (Tim Drake) was kidnapped. Batman confronted the kidnapper only to discover that it was a grown-up Jason Todd. It turns out Jason was pissed that Batman never avenged his “death” and has been a thorn in the side of the Caped Crusader ever since as protagonist Red Hood. 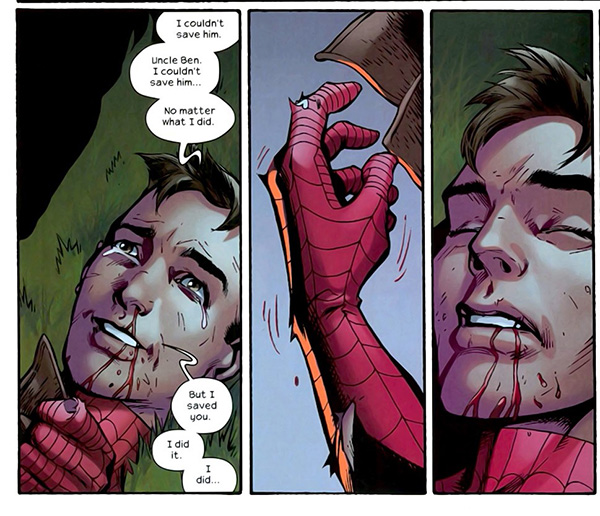 For the 700th and final issue of The Amazing Spider-Man, how did Marvel comics celebrate? They killed off the main character! To add insult to injury, the comic came out just a few days before Spider-Man creator Stan Lee's 90th birthday! Lee explained how he dealt with the death of one of his most beloved creations: “That's one helluva birthday present for me, but then, a little voice in my head whispered, 'never say never.'"

This isn't the first time ol' Web-head died. In 2011, in the Ultimate version of the series, Peter Parker/Spider-Man died only to be replaced by a half Latino/half African American teenager.

7The superhero who stayed dead for over 50 years...or did he? 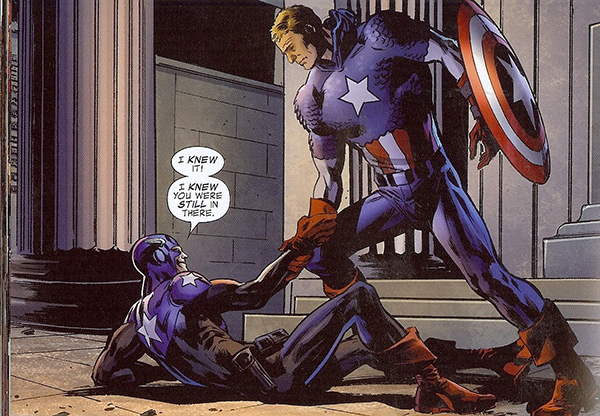 Bucky Barnes was to Captain America as Robin was to Batman – his closest ally, friend, and confidant. During World War II, the duo fought the bad guys, but Bucky bought the farm towards the end of the war and presumably stayed dead for decades while Captain America was in suspended animation, only to return to action years later.

It turns out, Bucky didn't die. The Russians discovered him, and he was as reprogrammed to become a Soviet assassin called the Winter Soldier.

After a while, Bucky resurfaced and asked Director Fury for a job. Following the Superhuman Registration Act (developed in the Civil War series event), Fury assigned him to protect Captain America and to get involved as an agent. After Rogers was seemingly assassinated, Bucky took his place as Captain America. Later, it's revealed that Rogers is still alive, but Rogers gives Bucky his blessing to continue as Captain America and hangs up his uniform. Since then, Bucky has gone back and forth between being Captain America and the Winter Soldier.

The whole Winter Soldier story (albeit with differences from the comic book version) is the subject of this year's kick-ass film, Captain America: The Winter Soldier.

Now, we come to the aforementioned Archie Andrews. So, you thought everything was squeaky clean in Riverdale? Well, things have changed!

In Issue 36 of Life With Archie, Archie dies while foiling an assassination attempt against best friend Kevin Keller, the first openly gay character in the Archie world. Archie takes a bullet for Keller and supposedly dies. Says Archie publisher, John Goldwater, of the event: "He dies in the manner that epitomizes not only the best of Riverdale but the best of all of us."

Maybe it's time for Jughead to don a cape and cowl and kick some ass.

9The relatives whose murders created the most iconic crime-fighters ever 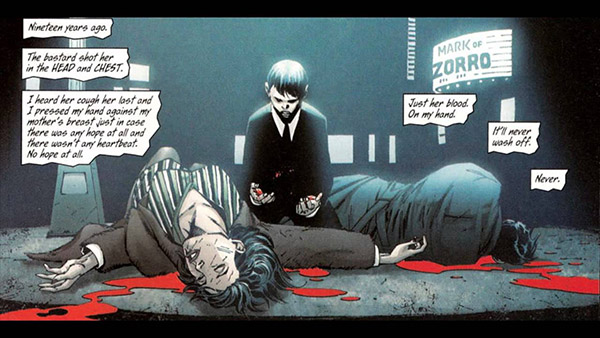 Yes, all of these entries have indeed been shocking for the reader, but you can't beat the impact the deaths of Bruce Wayne's parents had on the young boy.

After exiting a theater, Thomas, Martha and young Bruce Wayne were confronted by Joe Chill. In attempting to mug the couple, Chill shot and killed Thomas and Martha in front of Bruce, but spared his life. That event transformed Bruce Wayne into Batman.

On the other side of the coin, the murder of Spider-Man's Uncle Ben made Peter Parker use his powers more responsibly. This story was capped off with one of comics' most famous phrases, “With great power comes great responsibility.” 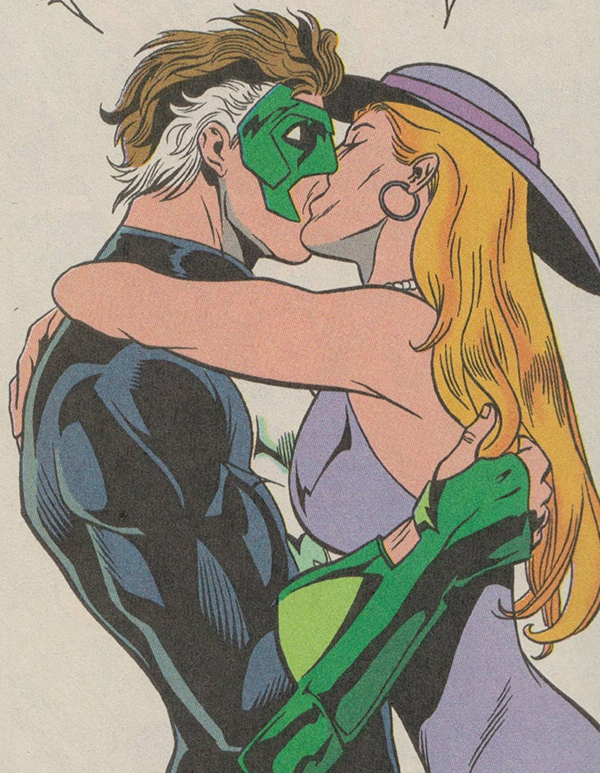 Sure, Kyle Rayner isn't my favorite Green Lantern, but he held that position for a while after Hal Jordan had a meltdown.

Rayner had a girlfriend named Alexandra DeWitt (no relation to Joyce) who helped him get his life together. But the couple's bliss came to an abrupt end when Major Force came looking for Kyle. Major Force murdered DeWitt, cut her up into pieces and put her in the couple's refrigerator. Oh, and he left Kyle a note that read: “Surprise for you in the fridge.” The creep.

Surprise, surprise, years later, she came back as a Green Lantern herself— DeWitt recently appeared as Black Lantern.