Drying food is a method of preservation that has been around for centuries. By removing all of the moisture, the growth of bacteria, yeasts, and mold is inhibited from food and makes it perfect for the likes of travelers, hikers and for use in the military.

Let's face it, water is THE basic necessity to sustain life on earth. Here is a list of some amazing objects that were brought to life just by the addition of water. 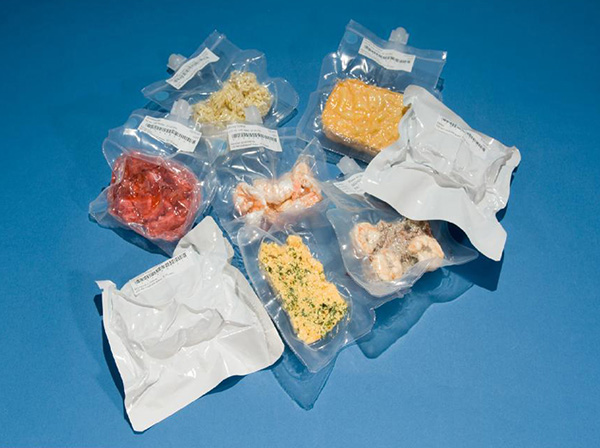 I remember visiting the Smithsonian National Air and Space Museum in Washington, D.C. when I was a kid and the museum had a “souvenir” in their gift shop that fascinated me. They sold dehydrated ice cream in foil packages exactly like the astronauts ate up in space.

For several years and missions, astronauts relied on dehydrated meals. Foods taken into space must be light-weight, compact and nutritious. It must also keep for long periods without refrigeration.

During John Glenn's 1962 Friendship 7 flight, meat and vegetables were pureed and put in tubes resembling toothpaste. It was then disgustingly squeezed in to the astronaut's mouth from the tube. Dehydrated and freeze-dried foods were introduced during Project Gemini. On-board hydrogen-oxygen fuel cells provided a source of water that could be used to moisten the meals. ?

A typical meal for an astronaut during the Gemini mission was a beef sandwich, strawberry cereal cubes, peaches and beef and gravy. After the food was eaten, a tablet was inserted into the opened packages that held the remaining food to prevent bacteria growth.

Refrigerated foods were introduced in 1973 during the Skylab program.

Come to think of it, I haven't had the astronaut dehydrated ice cream in years, but from what I remember, stick to the real deal.

2Freeze-dried underwear you carry in a tin 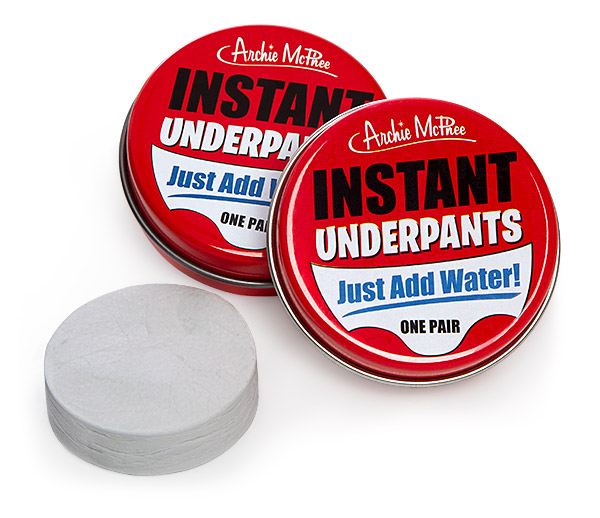 What was that old saying – “Always wear clean underwear. You never know when you might have an accident and need to go to the hospital!” Well, the Archie McPhee Company has got you covered. Now you can have your very own pair of instant underwear!

As you can see in the video below, just take the horse-sized pill of dehydrated underwear and drop it in glass of water. Boom! Your very own wet pair of undies to wear!

Sound counterproductive? Maybe the “Emergency Underpants Dispenser” is more up your alley – just pull a pair of undies out of a tissue box and your troubles are over.

Something tells me you shouldn't take Archie McPhee's products too seriously. After all, the company also manufactures gravy candy and pigeon masks. 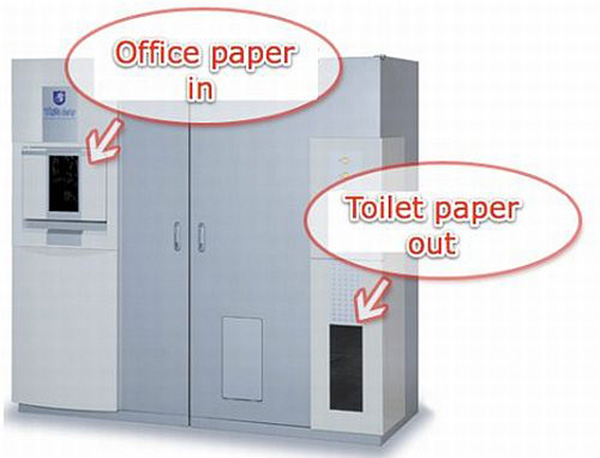 Another Japanese product makes our list and it's a doozy! Introduced a few years ago, the White Goat Paper Recycler didn't exactly take the world by storm. Made by Japanese company Oriental, this monstrosity of a machine makes toilet paper out of office paper.

Just simply insert about 40 sheets of paper and the machine does the rest. The machine shreds the paper and then moves on to a pulper, where the material is dissolved in water. The pulp is thinned out into wet paper, dried and rolled into a roll of toilet paper. The whole process takes about 30 minutes.

Sure, you save trees by recycling your paper, but who knows how much electricity and water goes into this process! At around $100,000 a machine, that's a mighty expensive wipe!

4Powdered alcohol may be coming to a liquor store near you

Oh boy, this next entry might cause more problems than it's worth – powdered alcohol!

Are you a hiker who wants to enjoy alcoholic beverages “without having the undue burden of carrying heavy bottles of liquid?” Are you an adult traveler “journeying to destinations far from home” that wants to “conveniently and lawfully carry their favorite cocktail in powder format?” Then, this drink is for you!

On the product's website, Phillips details the merits of Palcohol's industrial (non-ingestible) formulation, saying the product could be used in a wide variety of ways: from being used as an antiseptic to being a lightweight alternative to powering a camping stove or even as an emergency fuel pouch for a vehicle.

Each packet contains 10-12% alcohol by volume, which equals to roughly one drink.

5Water played a part in the building of the Great Pyramids 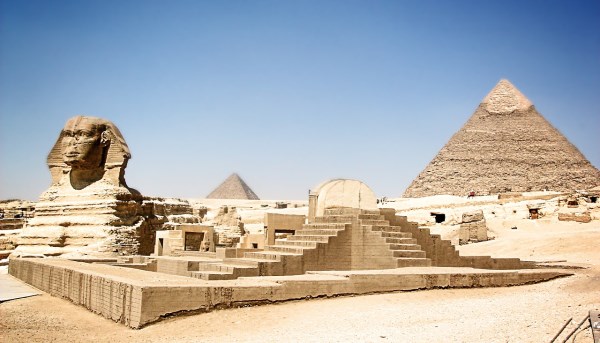 Have you ever wondered how the great pyramids of Egypt were built? Just how did the ancient Egyptians drag stones weighing several tons from quarries all over the country? Did they use ramps? Flatbeds on wheels of some kind?

Well, according to some researchers, the answer might have been more simple than we thought. Dutch Egyptologists believe that ancient Egyptians used sleds to transport the heavy stones across the sand. To make it easier to move the sleds, they poured water on the sand.

After several experiments, researchers found that by wetting sand, sleds can be pulled with about half the effort. When water gets between grains of sand “liquid bridges” are formed and the water “acts like glue, keeping the grains in place. This is great for sand castle building, and also, it turns out, for sand transportation.”

While not all Egyptologists are convinced by this theory, it's safe to say that not many of them believe aliens built the pyramids.

With Popin' Cookin candy the Japanese went one step further and created a candy AND an activity! By adding water to the powder mixture, you can create your own edible toy, which could be anything from a mini hamburger to sushi.

The video on how to make the candy doesn't look anything like sushi to me. It looks like when adding the powder to water, you get your very own Rolling Stones tongue to dip in some yellow pudding matter. I think I'll stick with eating real sushi and listening to Rolling Stones records.

7Origami at a microscopic level 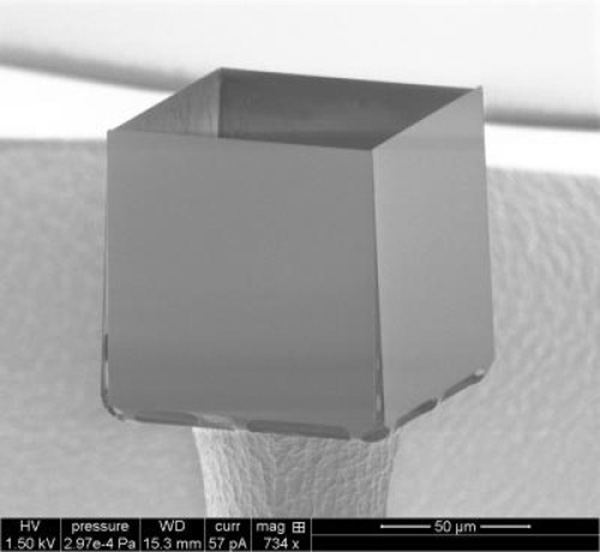 Size isn't everything, just ask the researchers at the University of Twente in the Netherlands. They have taken the ancient art of origami down to a microscopic scale. Scientists have taken a flat piece of silicon nitride – about the size of a grain of sand – and folded it into various shapes using a single drop of water.

To help solve the challenge of building in miniature, scientists have studied the technique of self-assembly, in which natural forces such as magnetism or surface tension trigger a shape change. In the 1990s, solder-assembly used surface tension of melting solder to fold silicon. This helped cram computing power into shrinking electronic devises. Now, researchers are using water to fold silicon which is a much cheaper and quicker process.

Although creating cubes, pyramids and bowls is all very nice, the research team is working toward making conductive hinges and creating 3-D sensors with this new technique.

I imagine you need pretty good eyes and steady hands for that job!

8A novelty pet that comes to life with water 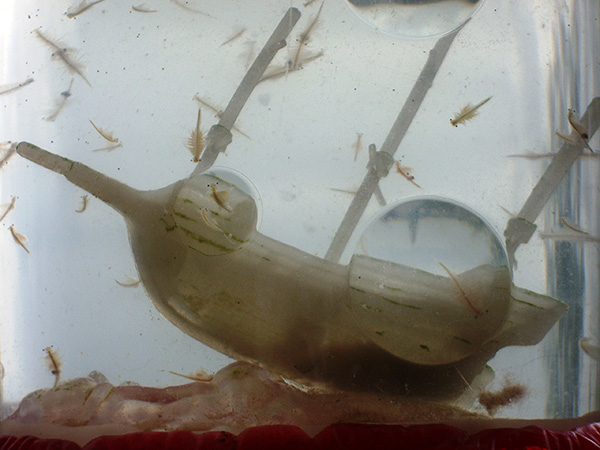 What "just add water" list would be complete without Sea-Monkeys?

A staple of American pop-culture, Sea-Monkeys were heavily marketed and advertised in comic books. Do you remember images of these adorable underwater creatures with their families, wearing crowns and grinning widely? After plonking down your hard-earned cash and waiting several weeks to get your Sea-Monkeys, you couldn't wait to build and start your very own underwater kingdom. Heck, the advertisement said that these tiny creatures are “so eager to please, they could even be trained!”

Although it was cool that these creatures came to life by just adding water, many kids felt jilted – real sea-monkeys looked nothing like the happy-go-lucky sea family as depicted in the ad.

So, what are Sea-Monkeys? They are actually tiny brine shrimp, a type of crustacean that has the ability to lay encapsulated eggs called cysts. A cyst can dry out and remain viable for years. If you put sea-monkey cysts in salt water, they hatch very quickly and the shrimp mature in about eight days.

If your Sea-Monkey colony gets stricken by a plague of sorts, don't fret. The company that sells these little critters has Sea-Medic Sea-Monkey Medicine for sale on their website along with other supplies such as Cupid's-Arrow Mating Powder and Red-Magic Sea-Monkey vitamins.

Fun facts: Sea-Monkeys breathe through their legs and are born with a third eye which they lose as adults.

9A superhero that grows 600% larger

A few years back, while traveling through the south, I made a pit stop at a gas station. At the counter was a Spider-Man figure that, when placed in water, grows up to 600% its size.

Being the comic book nerd I am, I never did take ol' Web Head out of his packaging, but according to the instructions it takes the mini super-hero 72 hours to reach his full size (up to 600% larger) and “The Spider-Man can be grown again and again.” My question is: you grow a Spider-Man of your own, then what? What do you do with a water-drenched Wall-Crawler?

Check the video out and be thrilled yourself: 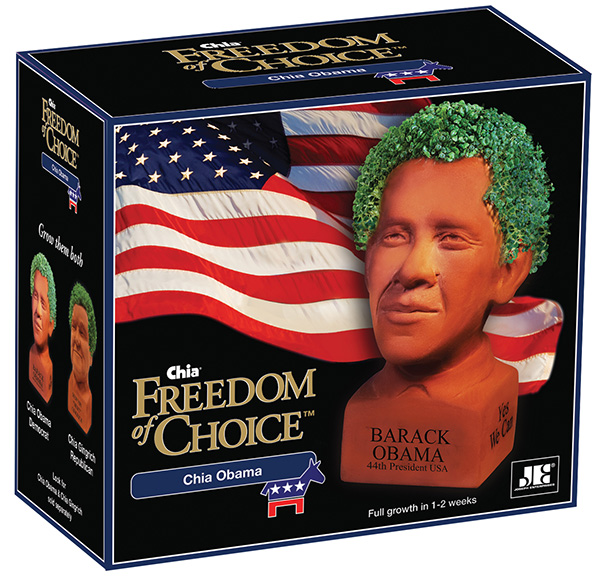 Chia Pets are an American tradition. Sold only during the holiday season, these hollow-bodied clay figurines contain grooves to put the Chia herb seeds on. When the seeds sprout, they simulate the hair of a particular animal, like turtles, pigs and frogs. ??By 2007, Joseph Enterprises, Inc., were selling a half a million Chias a year and branched out into animated characters like The Simpsons, Scooby Doo and SpongeBob Squarepants. But why stop there?

Yes, folks, there is now a President Barack Obama Chia Pet! The sky's the limit with how large you want to make his Chia-fro! The Chia Barack Obama comes in two different likenesses: “happy” and “determined.”

What did Joseph Enterprises follow up the Obama Chia with? The company, also famous for making The Clapper sound-activated switch, now makes Duck Dynasty Chia Pets. Clap off!