1The future's so bright, I gotta have illuminated tires 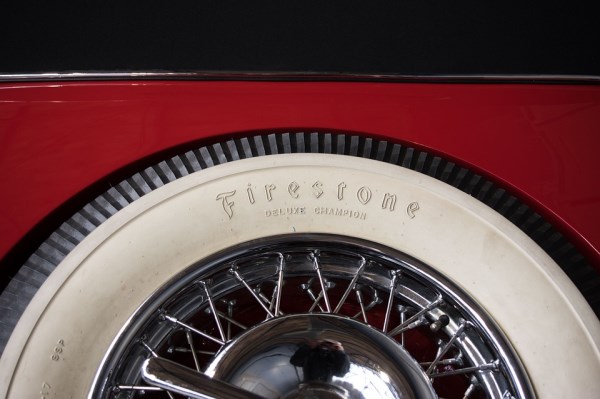 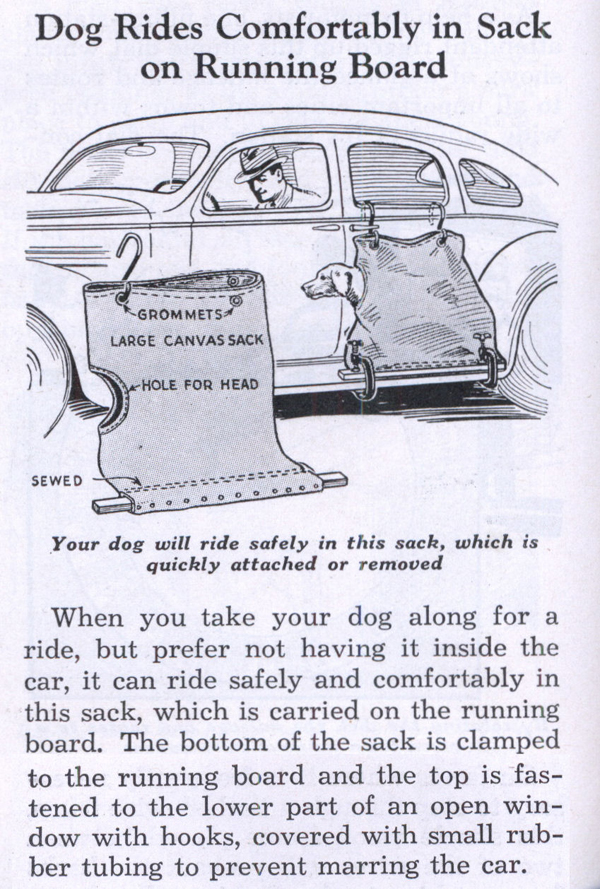 "I'm Mitt Romney and I approve this detachable dog sack."

This invention first appeared in the June 1935 issue of Popular Mechanics. It was designed to keep the car clean while giving the dog some fresh air. To the great relief of dogs everywhere, it was never added to any car models.

3Have a highball on the highway 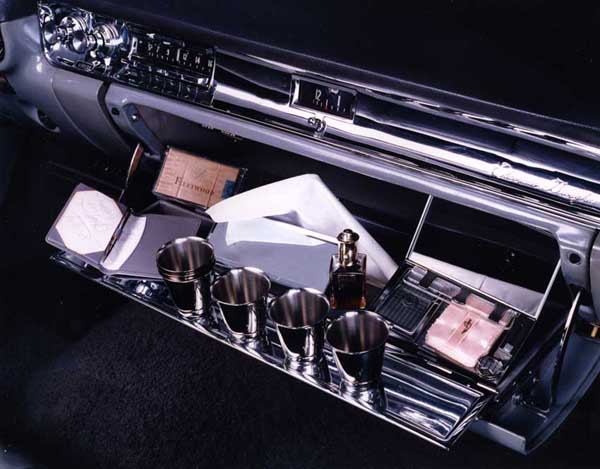 In the days before DUI/DWI laws were the norm, the 1957 Cadillac Eldorado Brougham came equipped with a luxurious magnetized minibar in the glovebox that would make Don Draper proud. Other features included a complete woman's grooming compact and matching leather notebook, a cigarette case, a comb and an atomizer filled with “Arpege Extrait de Lanvin” perfume. 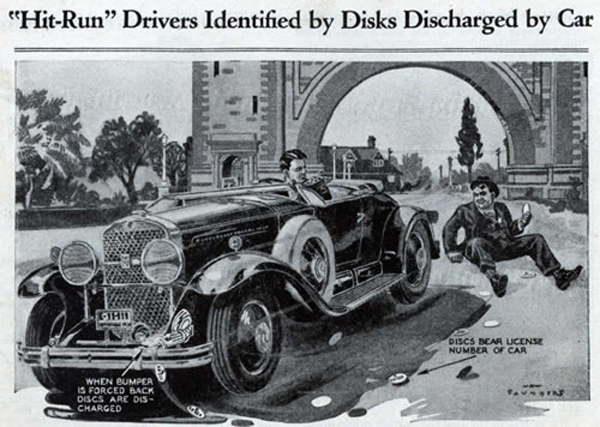 From a 1931 issue of Popular Mechanics, an idea was proposed to identify hit-and-run drivers by means of a special device on the bumper which ejects identification discs bearing the car's license number and name of the driver when a victim is struck. Now this is an idea we can get behind!

5This Amphicar brakes for fish 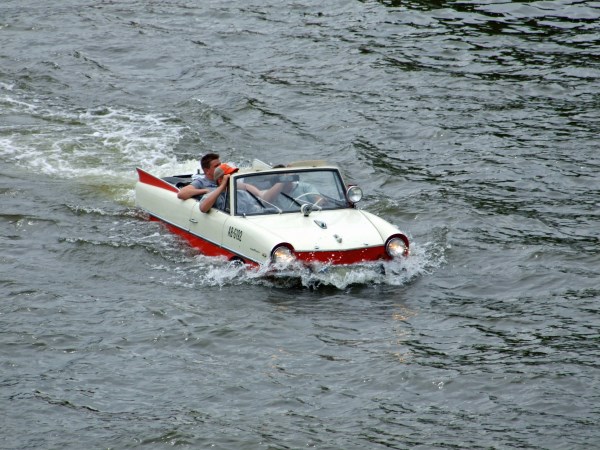 Amphicars are convertibles with a small, rear-engine four-cylinder Triumph motor, twin props for the water and a four-speed transmission for the road.

The Amphicar was produced between 1961-1968. Not a particularly great car or boat, the Amphicar reached maximum speeds of 70 mph on land and 7 mph on water and that's probably stretching it. Furthermore, they would sink like a stone if the bilge pump failed. Thanks to Amphicar enthusiasts, there are still several on the road – and at sea – today. 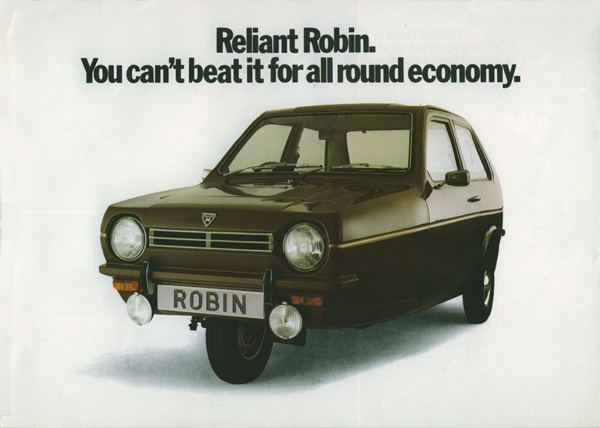 Robins, manufactured in the U.K. for a whopping 27 years, were very popular in northern England. The cars were classified as motorcycles because they lacked a forth wheel. With this classification only a motorcycle license was needed and, as a result, registration and insurance were cheaper for working class folks. They even handled well in snow because they were so lightweight they rarely got stuck. Instead, they just glided over the tops of snow banks.

The downside of the Reliant Robin, you ask? Due to its three wheel design, the car tips over whenever it makes turns. According to enthusiasts, weighing down the passenger side with a cement block or heavy toolbox will act as a counterweight to help it from tipping. Another solution? Just drive it in a straight line!

Check out this clip from BBC's Top Gear to see the Reliant Robin roll: 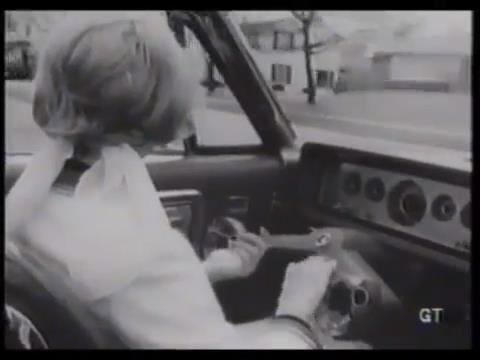 In 1965, Ford promised a more comfortable ride and a better view of the road and dashboard instruments with the Wrist-Twist system of steering. The company boasted that the unique set of tiny wheels would make parallel parking a breeze, but we think the Wrist-Twist system would likely be disastrous in emergencies. Join the car crash set! 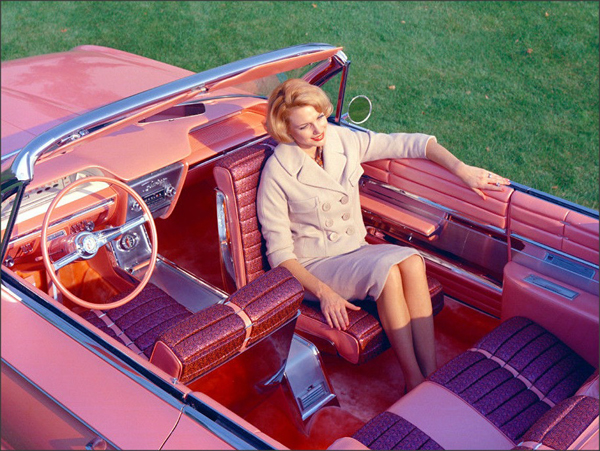 Check out this 1961 Buick Flamingo Motorama show car. Created for the final General Motors Motorama, it's really a '61 Buick Electra 225 convertible finished in a special Flamingo Pink color, with two tone pink leather interior and floating bucket seats, including a 180 degree swivel on the passenger side.

9Be a vinyl DJ with The Highway Hi-Fi 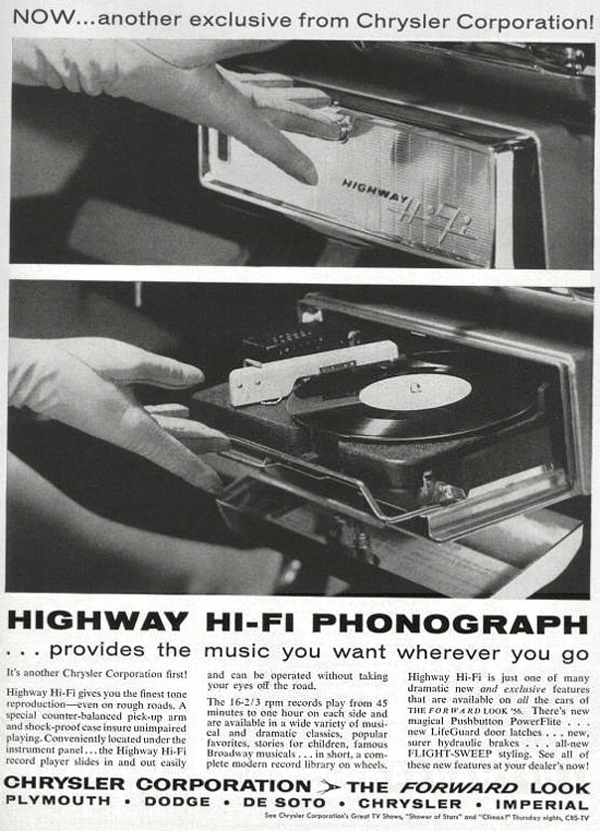 In 1956, the Highway Hi-Fi was offered in Chrysler, DeSoto, Dodge and Plymouth vehicles. A heavier record was used to prevent skipping and slowed down to 16 2/3 rpm to extend play time to 45 minutes. The players were manufactured by CBS - Columbia and the roster of artists available were limited to those on the Columbia label. A non-exclusive player was manufactured by RCA in 1960 and while it was able to play standard 45s, it was more prone to malfunction.

10The 1961 Ford Thunderbird is a sultan of (steering wheel) swing 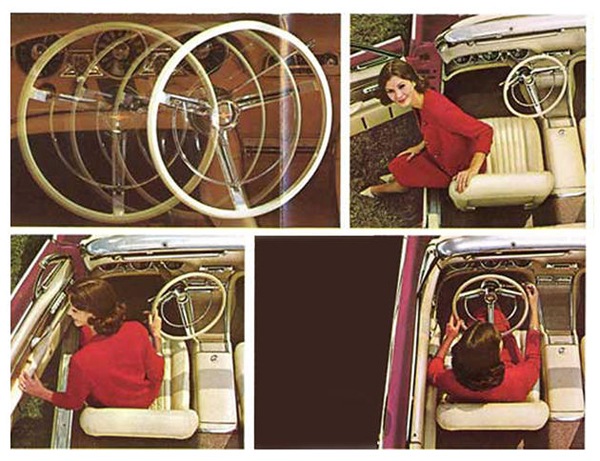 For $25 extra, the '61 Ford T-bird came a Swing-Away Steering Wheel, which used a special steering column that moved to the right about 10.5" to allow for easier entry and exit for the driver, especially if he/she was carrying anything.