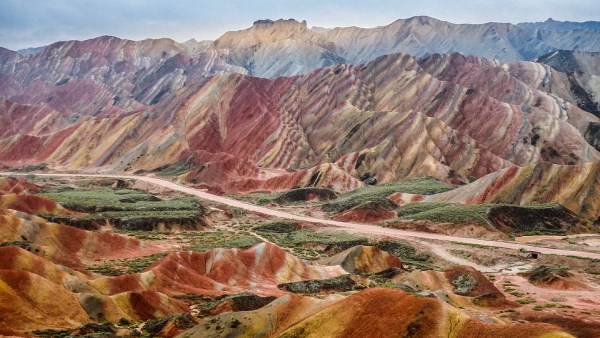 Yes, we had a hard time believing that this insane mountain formation was actually real, because we haven't fallen down the rabbit hole, but this technicolor range actually exists.

The mountains are part of the Zhangye Danxia Landform Geological Park in China. Layers of different colored sandstone and minerals were pressed together over 24 million years and then buckled by tectonic plates.

While the photos are certainly incredible, there could be some photo manipulation going on to make the colors pop a bit more than they would naturally. 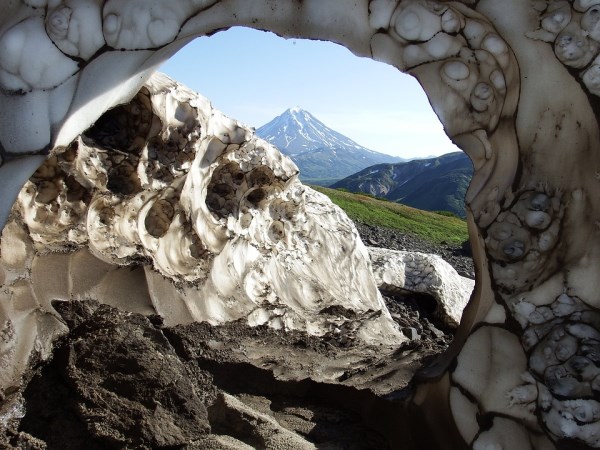 No, you're not tripping – these psychedelic salt caves actually exist. These photos were taken deep underground in the abandoned mines beneath Yekaterinburg, Russia. Layers of carnallite – a mineral used in fertilizers – band the tunnel walls, producing these technicolor masterpieces. Think a subterranean version of China's stunning rainbow mountains.

A small portion of the carnallite mines remain in use, but most of the passageways are now closed and off-limits to the public without a special government permit, according to photographer Mikhail Mishainik. 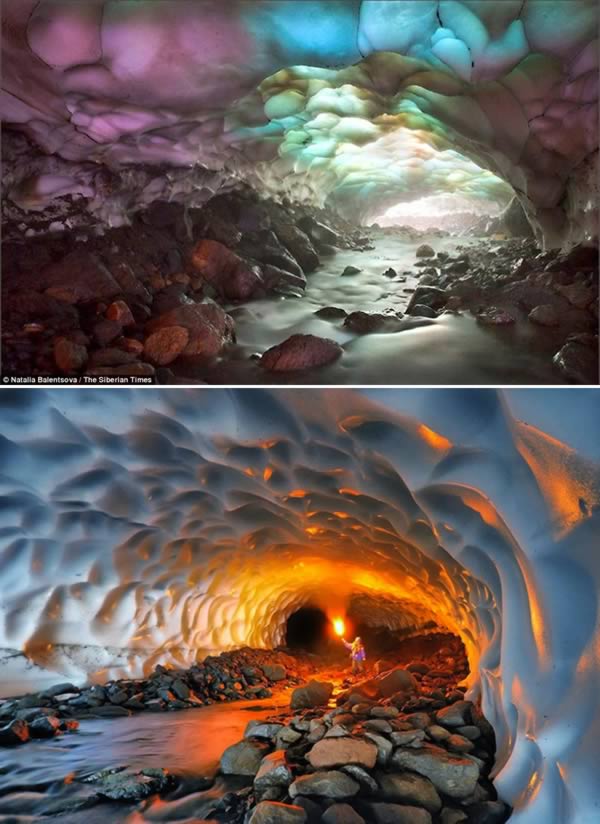 This surreal-looking ice cave is located on the Kamchatka Peninsula of Russia. The almost kilometer long tunnel was formed by a hot water spring flowing beneath the glacial ice fields on the flanks of the nearby Mutnovsky volcano. Because glaciers on Kamchatka volcanoes have been melting in recent years, the roof of this cave is now so thin that sunlight penetrates through it, eerily illuminating the icy structures within.

4Tulip Fields in Lisse (The Netherlands) 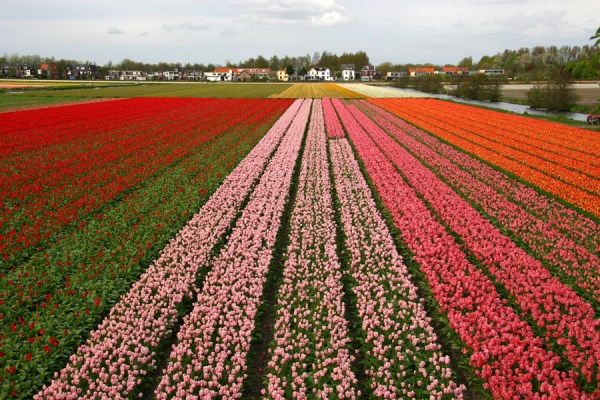 A vast patchwork of kaleidoscopic color, Holland's tulip fields are clearly nothing to be sneezed at.

From the air, it looks as though a giant toddler armed with a box of super-sized crayons has been let loose on the Dutch countryside–if the lines weren't quite so perfect.

The vibrant blue, red, pink and yellow flowers sprawl as far as the eye can see in Lisse, where farmers hope to make huge profits selling them to florists and supermarkets around the world.

The tulip season begins in March and lasts until August with several shows held across the country, but the flowers are undoubtedly at their most spectacular during April.

The cultivation of flower bulbs began more than 400 years ago. Today Holland produces more than nine billion bulbs every year, of which two thirds are exported overseas. Evenly distributed, this number would allow for almost two flower bulbs for every person on the planet. 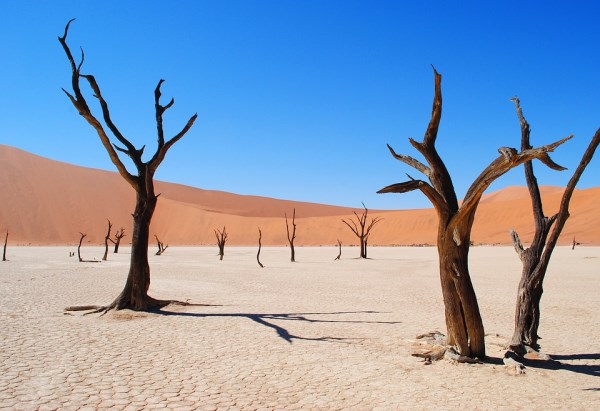 While on assignment in Namibia for National Geographic magazine, Frans Lanting captured this surreal image in a location called Dead Vlei. Due to the nature of the lighting in the frame, the photograph appears almost like a painting. The photo caption says, “Tinted orange by the morning sun, a soaring dune is the backdrop for the hulks of camel thorn trees in Namib-Naukluft Park.” 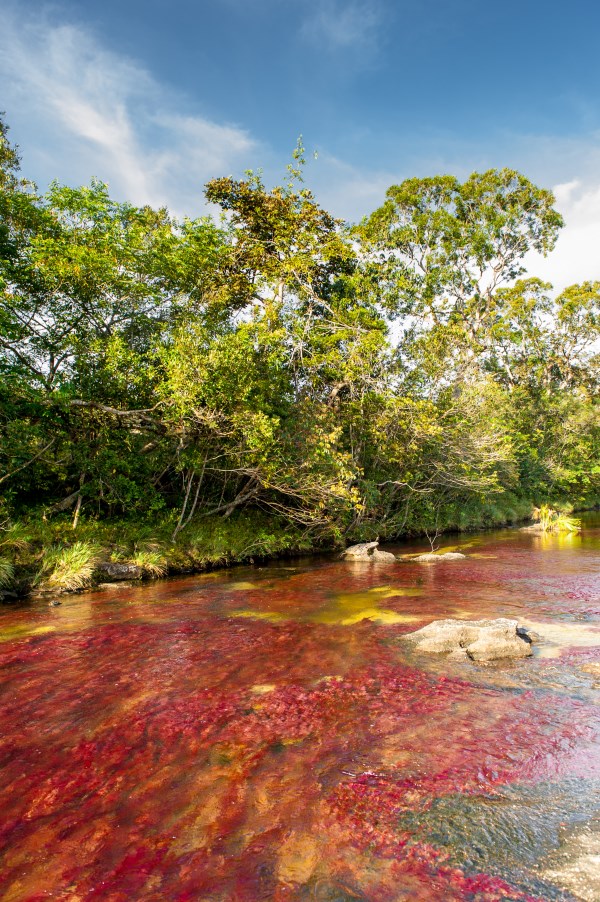 Caño Cristales is a Colombian river located in the Serrania de la Macarena province of Meta. The river is commonly called "The River of Five Colors" or "The Liquid Rainbow," and is referred to as the most beautiful river in the world due to its striking colors.

The river appears in many hues–including yellow, green, blue, black, and especially red–which are caused by the Macarenia clavigera (Podostemaceae) at the bottom of the river. 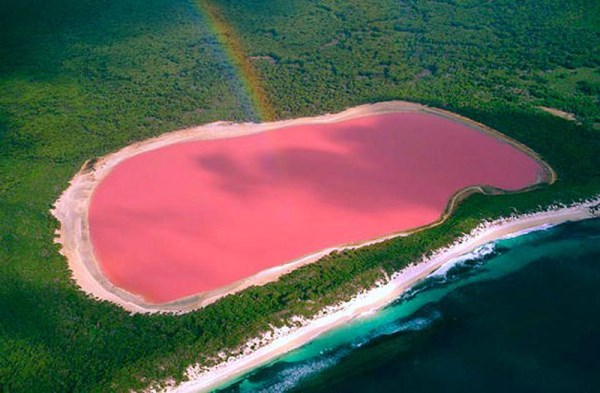 No, your eyes are not deceiving you, nor is this image Photoshopped. From a distance, Lake Hillier of Australia's Recherche Archipelago looks like a swath of solid bubble-gum pink. Upon closer inspection, the color takes on a more watery, translucent quality, but remains unmistakably pink.

While the causes behind the unusual coloring of other pink lakes – such as the nearby Pink Lake and Senegal's Lake Retba – have been confirmed, the reason for Lake Hillier's color remains a mystery. Some speculate that Lake Hillier's color, like that of the other lakes, is the result of high salinity combined with the presence of a salt-loving algae species known as Dunaliella salina and pink bacteria known as halobacteria. Unlike other pink lakes, which regularly change colors in accordance with temperature fluctuations, Lake Hillier maintains its pink shade year-round. The water also retains its pink hue when bottled.

Whatever the cause, the water does not appear to pose any danger to humans. Though high salt levels might not make for the most comfortable swim, visitors hoping to immerse themselves in Lake Hillier's brilliant pink waters are perfectly safe to do so. 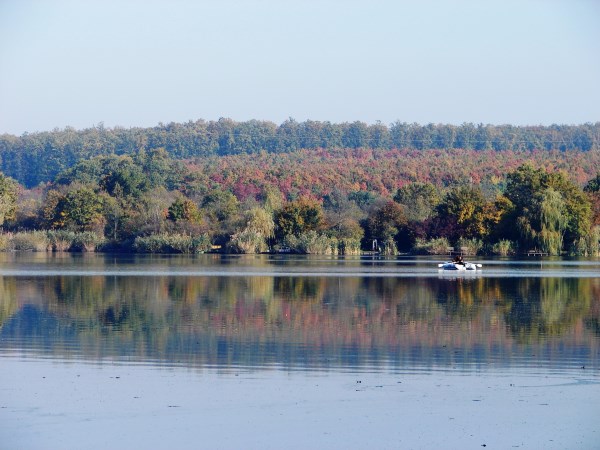 This photo looks like two images spliced together; above is a normal forest, and below, a strange, Martian one, but it's one image from a single place and time — the hills of western Hungary, six months after a devastating industrial accident.

Soldiers and volunteers shoveled the muck into trucks and hosed down the streets, but where the sludge had been, every surface was stained red.

When Spanish photographer Palindromo Meszaros visited the disaster site in the spring of 2011, he says, a "feeling of the horror" still lingered. In 2012, he published a collection of the most striking photos from his visit in Fraction magazine.

9Fly Geyser in the Black Rock Desert, Nevada (US) 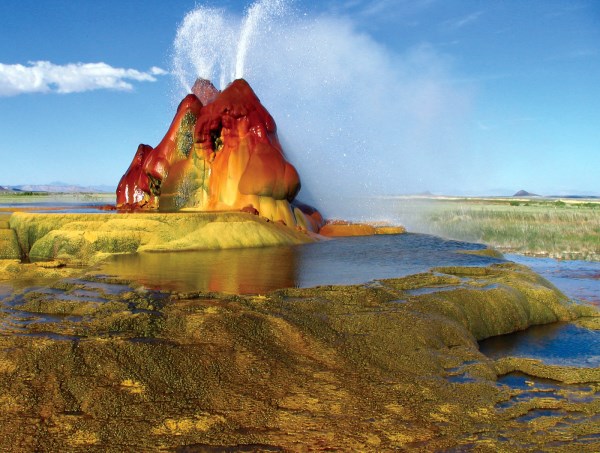 Located on a gated parcel of private property within the million-acre Black Rock Desert, Fly Geyser is not a natural phenomenon. It was created accidentally in 1964 from a geothermal test well inadequately capped. Scalding water has erupted from the well since then, leaving calcium carbonate deposits growing at the rate of several inches per year. The brilliant red and green coloring on the mounds is from thermophilic algae thriving in the extreme micro-climate of the geysers.

10“Door to Hell” in Derweze (Turkmenistan) 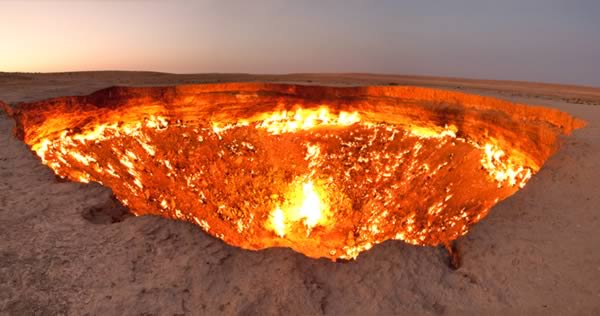 At first glance, it could be a dramatic scene from a science-fiction movie, but this giant hole of fire in the heart of the Karakum Desert is not the aftermath of an attack on Earth launched from outer space. It is a crater made by geologists more than 40 years ago, and the flames within have been burning ever since.

Welcome to Derweze in Turkmenistan – or, as the locals have called it, "The Door to Hell."