Pretty much everyone loves the sultry twangs of a guitar. Loud and frenetic or soft and gentle, it can literally sooth the savage soul. But occasionally, a guitar is not really a guitar. Sometimes it is a boat or a coffin or even a man-made forest. Check out these unexpected and surreal guitar-shaped objects that are only masquerading as musical instruments.

1Musician Goes to the Grave in a Guitar Coffin: England

Musician John Graham left this world on the right note when he was laid to rest in a coffin that was fashioned in the shape of a 12-foot-long Fender Stratocaster guitar. A life-long guitarist, Graham played with the 1960's British band The Ramrods. After his 2012 death in Gloucestershire, England, his wife couldn't think of a more worthy tribute than burying him in the thing he loved best. His coffin was an exact replica of his favorite guitar, given to him as a gift when he was 15 years old. 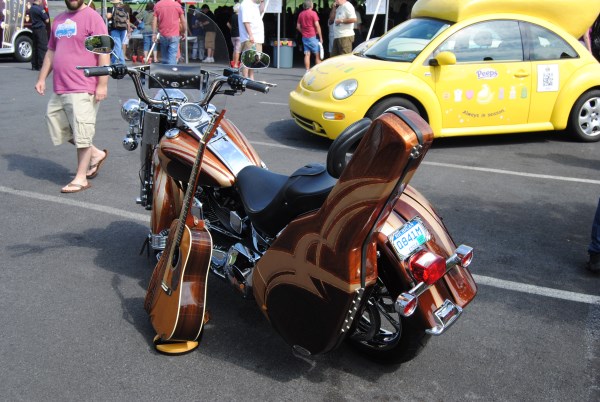 Set out on the highway looking for adventure on this spectacular guitar-shaped motorcycle. This masterpiece was created in 1981 by California artist/biker Ray Nelson and was inspired by the album cover art from biker song recordings that he did in the 1960's.

Built on a 650 Yamaha frame, Nelson has displayed his "Guitcycle" in museums and motorcycle, car, and art shows. His biggest showing to date, however, was probably a 1982 round trip road extravaganza between San Francisco and New York City that bestowed upon him the Ripley's Believe it or Not title of "the only guitar ever ridden coast to coast."

Living in Georgia now, Nelson continues to show off his boss guitar hog and also devotes energy to his charity for underprivileged children called Guitars Not Guns.

3Giant Guitar-Shaped Forest in Memory of a Lost Love: Argentina 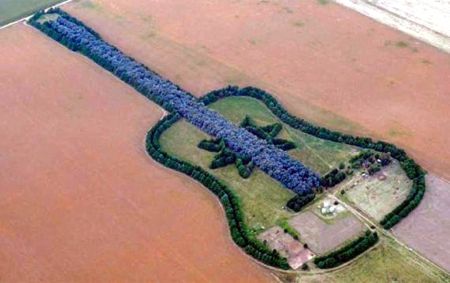 A heartbroken Argentinian farmer in the town of General Levalle has spent decades cultivating the guitar-shaped forest that he created to honor his late wife, Graciela, who died in 1977.

Pedro Martin Utera, now 72 years old, created this oversized tribute out of more than 7,000 living trees. The strings are formed from six rows of eucalyptus arbors which contrast in color from the greener guitar body made from cypress trees. When seen from an aircraft above this sparse region it is particularly impressive. It is more than 2/3 of a mile long and is truly a labor of heartfelt love.

4A Guitar-Shaped Deck Floats Upon a Backyard Pond: Illinois, USA 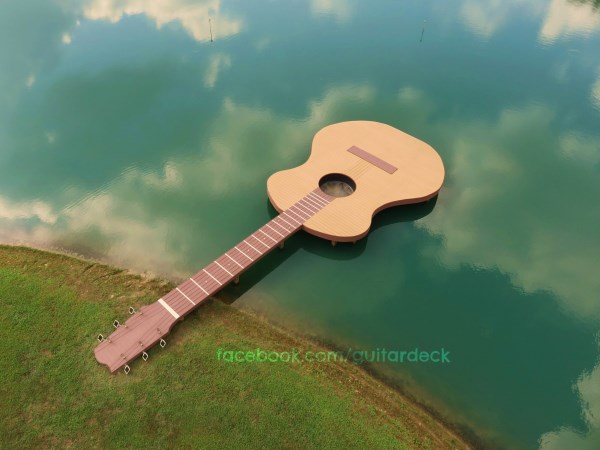 A married couple in Dixon Springs, Illinois created their own personal musical oasis when they constructed a giant guitar-shaped deck to stretch into the water of their backyard pond. Used as a fishing dock and for entertaining friends, it is a scale version of the owner's own six-string acoustic guitar. The top of the guitar's neck has lighted pegs powered by solar panels in the shape of tuning keys.

This 24-foot-long guitar car was created by Hollywood custom car legend Jay Ohrberg. Ohrberg has designed over 500 other madcap-mobiles that run the gamut from a bling-bling Elvis car to a tooth-baring dinosaur car to the 100-foot-long Guinness World record holding "longest limousine in the world." Known as the Git-Tar, this working automobile was inspired by the music of 1950's musical legend Chuck Berry.

6Out to Sea on a Guitar-Shaped Boat: Australia

In 2008, Australian singer-songwriter Josh Pyke came up with a clever idea before shooting a video for his latest song. He commissioned Australian guitar manufacturer Maton to design a floating version of his very own acoustic guitar and dubbed it the SS Maton. Equipped with an outboard motor, he made quite a splash as he spent the day filming in Sydney harbor.

The world's biggest music fans can rejoice that there is an additional way to celebrate the love of their favorite instrument. Pay homage to the praiseworthy guitar on top of a throne found in every household- the porcelain toilet. Available from a Kentucky company appropriately called Jammin' Johns, these hot seats are available in both acoustic and electrified versions. Add one to your loo and find inspiration in an unexpected place.

In the sleepy town of Fayetteville, Georgia you will find the ultimate tribute to the love of music. Country Western singer Elvis Cardin designed his dream home, a 3,800 square-foot Gibson guitar, after returning from the Vietnam war, where he apparently saw it in a dream.

Cardin constructed the 110-foot-long house by himself over the period of 16 years beginning in 1971. It is accurate, right down to the tuning pegs and strings that are formed from aluminum cables which stretch across the roof. In tribute to his dream abode, Mr. Cardin released an appropriately named country CD entitled "Living in an Old Guitar." 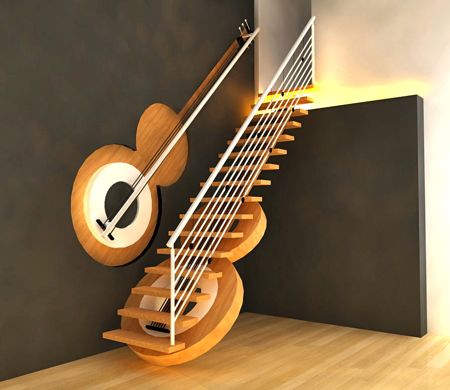 Some may joke that it is a "Stairway to Heaven," but this hip and sleekly-styled staircase is no laughing matter. Conceived by the creative and ingenious Indian Interior Designer Preetham Dsouza, this guitar is truly an original.

The guitar's fret board has been recreated from the treads of stairs, while a niche in the wall serves as both a handrail and creates the illusion that a 3-dimensional guitar case has been opened up. A functional piece of home design, Dsouza has elevated rock-n-roll pop art in a chic and cool manner.

10Dive into the Blues in a Guitar Pool: Tennessee, USA

Guitar swimming pools can now be found in several places around the world. They are mostly shaped like acoustic guitars, but a few electric guitars have been created as well.

The very first guitar swimming pool was installed in the 1960's at the Oakville, Tennessee home of flamboyant country music singer Webb Pierce. Pierce allowed paid tours of his guitar pool, and during the mid-1970's it attracted over 30,000 tourists a week. Unhappy neighbors filed a law suit to stop the tours, so in response Pierce commissioned a duplicate guitar pool to be built in 1978 in Nashville, a few miles away.

This second guitar pool, pictured here, was part of a hotel chain for years until the building was converted to condos in 1986, where it still remains.