1The Annoying Soccer Fan Who was Called from the Crowd to Play... and Scored! 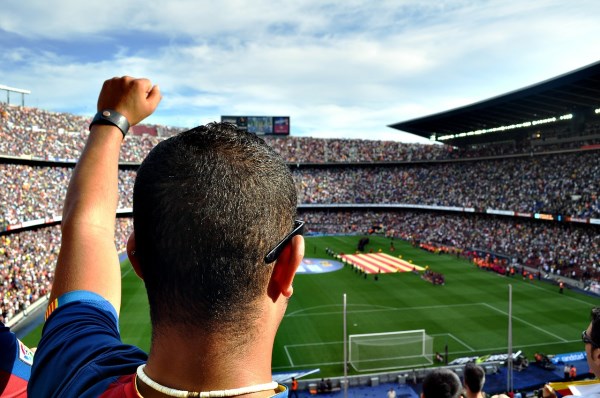 Ever since he was 5 years old, Steve Davies dreamed of playing for West Ham United. When he grew up, he went to all of their games, got team tattoos, and played in a Sunday league himself. When his team was playing a pre-season game at Oxford City on July 27, 1994, Davies was up front, giving his beloved team a hard time, as British football fans always do, but especially at the "ineptitude" of forward Lee Chapman.

Harry Redknapp, West Ham's assistant manager at the time, was running out of players and finally lost patience with the vocal supporter, so he approached Davies and said, "Oi, can you play as good as you talk?" The fan crossed the barrier and the manager walked him down the tunnel to join the team. "Lee you're off; Steve you're on," said Harry and sent the fan onto the field.

While having a fan playing for the team was quite unique, what happened in the 71st minute was even more remarkable. "Suddenly, we were on the attack," recalls Steve, who then flew forward, fast out of the traps, picked up the ball from Holmes, and made history. "I just hit it," he says with a shrug. "I hit it like nothing else. Know what I mean? I belted it."

The ball whistled low, past the outstretched hand of the Oxford goalkeeper, and ran into the bottom corner of the goal. Steve says he wheeled away in celebration, arms extended, with his head bent with disbelief. On the side of the field, Redknapp turned around and looked briefly to the heavens.

"It was like time stopped still – it was the greatest moment of my life," said Steve Davies, the fan who scored on his West Ham debut.

2The Masseur Who Saved a Goal Twice... and then Escaped the Field! 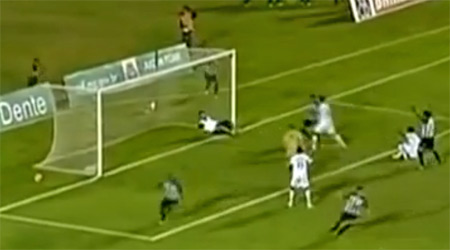 Non-players driven by desperation to take it upon themselves to become emergency goalkeepers are nothing new, but few instances have been quite as bizarre as this one.

In early September 2013, the second leg of Brazilian soccer's fourth division quarterfinal between Tupi-MG and GO Aparecidense was even at 2-2 in the 89th minute. The first leg ended 1-1, so an aggregate score of 3-3 had both sides on edge. Therefore, when Tupi threatened to score, Aparecidense's nervous masseur, Romildo Fonseca da Silva (known as “Lefty,” according to Globo), snuck up to one of the goal posts. When his side's keeper charged forward to try and stop a shot that he couldn't quite get to, the masseur stuck his foot out to make the goal-line save. A Tupi player then tried to tap in the rebound, but the masseur again made a kick save from a crab position in the goal.

Once his side was safe from anymore shots on goal, the masseur picked up his supplies and booked it out of there, hurdling the advertising boarding and sprinting into tunnel while being chased by Tupi players and other stadium staff.

The match was halted for 20 minutes while the officials tried to figure out what had just happened. When it resumed, neither side could score and Aparecidense advanced on away goals. Tupi-MG supporters threw rocks at Aparecidense's bus as it left, and the club's board vowed to challenge the result in court.

3The Quick-Thinking Ball Girl Who Set Up a Goal... and Then Scored a Deal with Playboy! 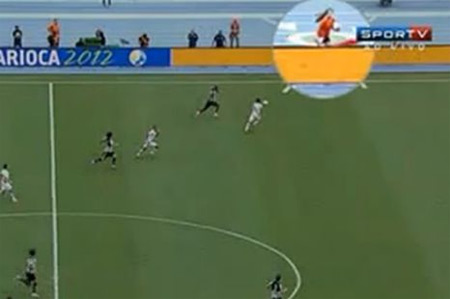 Fernanda Maia was just another ball girl working at the Campeonato Carioca's final game between Botafogo and Vasco de Gama back in 2012. But in the second half, Botafogo was winning 2-0 when Vasco de Gama cleared the ball into touch in the Maracana. Rather than slowly fetching the ball, Maia immediately threw the ball to a Botafogo player who made a quick throw in to Sebastian Abreu. The Uruguayan ran down the touchline and crossed for Maicosuel to score a third goal.

Botafogo became champion and Maia was credited with the “assist” for Maicosuel's goal. She was featured by a number of publications, including Playboy.

4The 11-Year-Old Boy Who Deflected a Ball in play at Yankee Stadium... Allowing His Team to Eventually Win the Game and the Series! 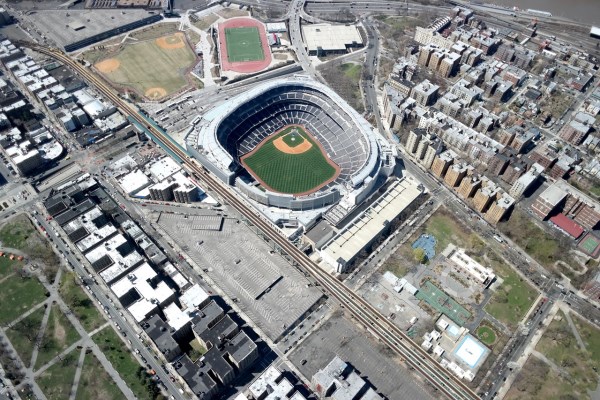 On October 9, 1996, during Game 1 of the 1996 American League Championship Series between the New York Yankees and the Baltimore Orioles, the home team trailed the Orioles 4–3 in the bottom of the eighth inning when shortstop Derek Jeter hit a deep fly ball to right field. Right fielder Tony Tarasco moved near the fence and appeared "to draw a bead on the ball" when 11-year-old Jeffrey Maier clearly reached over the fence separating the stands and the field of play nine feet below, snatching the ball with a glove of his own.

The kid's action altered the course of Game 1, as the resulting homerun allowed the Yankees to tie the score. They would go on to win the game and the series four games to one.

5The Guy Who Danced in a Speedo to Distract a Basketball Free Throw... and Succeeded! 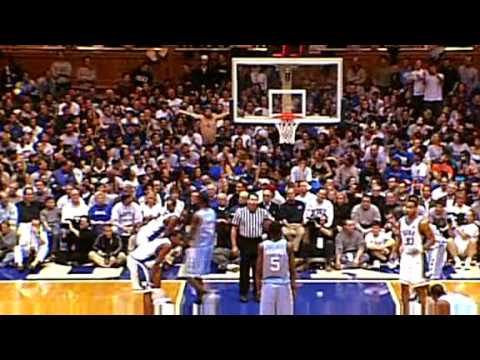 In 2003, a graduate student at Duke, Patrick King, snagged a ticket to watch his team face rival North Carolina right behind one of the baskets at Cameron Indoor Stadium.

At one point during the game, after North Carolina guard Jackie Manuel was awarded two foul shots, he arranged for his compatriots to sit quietly, which, in itself, seemed eerie. Then, King stripped down to a skimpy swimsuit, stood on his seat and began gyrating.

The first shot bounced away, which made King dance even harder. Manuel missed again. Duke ended up winning that crucial rivalry game by three points, and that's how the legend of the The Speedo Guy was born. He later got married, becoming a pastor and a father.

6The Ball Boy Who "Scored" a Goal... and Fooled the Referee! 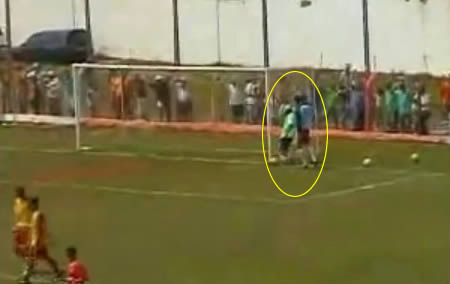 In September 2006, during a game between Atletico Sorocaba & Santacruzense in Brazil, Atletico was leading by a single goal in the dying minutes. So, they were mightily relieved to see Santacruzense striker Samuel's shot zip wide of the post. However, when a cheeky ball boy decided to bring the ball onto the pitch and sidefoot it impishly into the goal, referee Silvia Regina de Oliveira --the first female to be referee in the Brazilian National Championship-- had turned her back. When she saw the ball nestled in the back of the net, she simply assumed that the shot that everyone, including her, had seen go wide had actually gone in. The game finished 1-1, and the Brazilian FA were forced to uphold the results. However, the referee and her linesman (who was really to blame, of course) were suspended.

7The American Football Team that Won Thanks to a Blocked Pass... from a Fan! 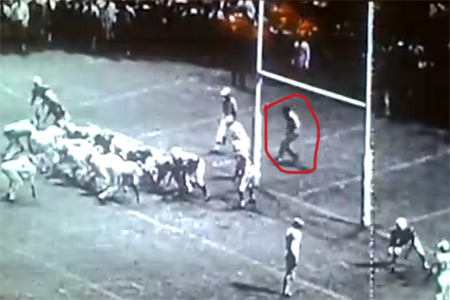 During the final seconds of the game, the Boston Patriots were beating the San Diego Chargers by one touchdown, 28-21. Then, a fan went onto the field and blocked a last second pass attempt. There was no instant replay and nobody noticed. They called him the Trench Coat Lineman.